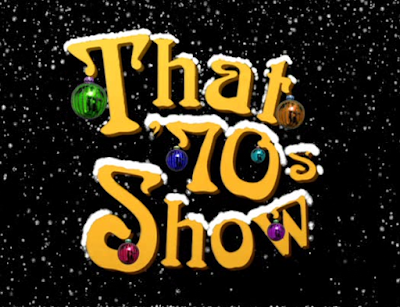 One way to recognize how popular Christmas entertainment has grown is to see its influence on popular culture. Not only does the 2001 episode "An Eric Forman Christmas" from That 70s Show take its name from A Charlie Brown Christmas, but the episode is filled with references to the Peanuts special, and numerous other Christmas movies and TV specials. Those familiar with That 70s Show will recognize the sarcasm and irreverence that are are found throughout most of the series' episodes however, this 2001 Christmas episode also includes a bit of nostalgia as well.

The story begins with Eric expressing his frustration and disappointment with Christmas. He feels the holiday just isn't the same as it was in the past. Hhmm...sound familiar? His mother Kitty suggests that Eric direct the church's Christmas pageant to help him feel the holiday spirit. Yes--these two elements are also key moments in the 1965 animated TV special A Charlie Brown Christmas.

At the pageant rehearsal, Eric is further frustrated by his friends' inability to cooperate with his direction. Jackie unreasonably insists that she play the role of the Virgin Mary--who rides in on a unicorn. Kelso sees his character of Joseph, less as a carpenter and more like a spaceman. Donna doesn't want to play the traditional role of a wise man but a wise woman, and even Fes balks at playing a shepherd. Directing the church's Nativity play doesn't inspire the holiday spirit for Eric.

Meanwhile, Red is disturbed by the bright and loud Christmas decorations set out by his next door neighbor Bob Pinciotti. When Kitty catches Red stealing Bob's decorations, she proclaims "I'm married to the Grinch!"


And, in a third story line, Kelso is excited to watch his favorite animated Christmas TV specials on TV. He specifically mentions the Rankin/Bass specials Rudolph the Red-Nosed Reindeer, Santa Claus is Comin' to Town, and The Little Drummer Boy. When his friends remark that his favorite TV programs are made for children, Kelso feels bad for feeling as excited as he is to watch them.


Kelso ends up having a dream in which he is a stop-motion animated character inside a Rankin/Bass Christmas special! He shares his frustration with Rudolph, Santa, and the Little Drummer Boy about liking programs made for youngsters--and they tell him to ignore his friends!

After Pastor Dave discovers Eric smoking in the circle, he is fired from directing the Christmas pageant. In the end, his friends come and apologize for ruining Eric's Christmas. It helps that they give him the one gift he was hoping to find under the Christmas tree this year--a tape deck for the Vista Cruiser. In case you didn't catch it any earlier, Fes even exclaims "Merry Christmas, Charlie Brown!" much like the children do at the end of the animated classic.


Do you have another favorite TV episode that references Christmas entertainment? Share your comments below. 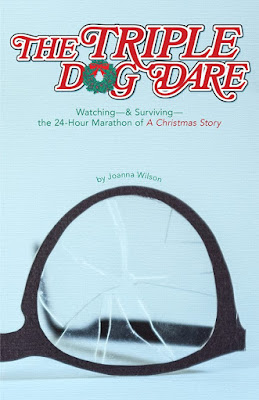 I'm excited to finally be able to share more information about my new book The Triple Dog Dare: Watching--& Surviving--the 24-Hour Marathon of A Christmas Story. I heard from quite a few of you about the project back in January after I posted this. Thank you for your support, enthusiasm and generosity. The photo above is the front cover artwork. And, the back cover includes the following text:

Every year since 1997, Turner Broadcasting has aired 24-hours of A Christmas Story from Christmas Eve through Christmas Day. The marathon has become a cultural phenomenon—many families tune in and watch the movie at least once—some watch several times. But no one watches all 24 hours, right?

Christmas TV writer Joanna Wilson trains her expertise on the 24-hour marathon of A Christmas Story to find out what really happens when you watch all 12 screenings of director Bob Clark’s classic Christmas movie, non-stop, commercials and all. Along the way, she discusses the traditions of Christmas on TV, the nuances of Bob Clark’s filmmaking, the ongoing appeal of the movie and its relation to the multilayered, literary storytelling of Jean Shepherd, the activities of binge-watching and hyper-viewing—and she experiences what may or may not be the first recorded case of soap poisoning.


I'm also pleased to announce that the book will be released on October 15th, 2016. You'll be able to purchase the book through this website as well as the publisher's site: www.1701Press.com
and other fine book retailers.

I'll share more as we get closer to the holidays!