Every January before I move on to new content, I like to take a moment to reflect on the previous year. Below, you'll see that I collected the top five most popular essays from this website written in 2018. I never really know which discussions are going to be popular, and which ones ignored. Did your favorite discussion from 2018 make the top five? I know I don't say it enough but THANK YOU for reading and following along with this website. I wouldn't have a top five without you. Now, on to the list.

I've been collecting LPs and CDs with a Christmas TV or film tie-in for many years. Only recently has it occurred to me to share about some of the records in my collection. This discussion from last January was the most popular but I went on the share more of my collection, including Part 2, Part 3, and Christmas music on CD. Since writing these discussions, I've acquired several more interesting film & TV Christmas records--enough to create Part 4. If this is your thing too, hold tight. More coming soon. Do you have any cool Christmas records?

I was pleasantly surprised to see this breakdown of the fifth season episode "Santa's Helper" from the family sitcom Diff'rent Strokes make the top five list. If you grew up watching the antics of brothers Arnold and Willis Jackson, then you know the charm of the series. I also admire the work of actor/comedian Garrett Morris who guest stars in this touching holiday story. It's also nice to see that one of my discussions from Black History Month stood out from the rest of the year too. Make sure you come back and check out the new discussions this February too--I'm doing up Black History Month again, honoring outstanding Christmas programs that feature African-Americans, just like I do every year.

My travel essays to pop culture destinations with a Christmas film or TV tie-in have been some of my most popular essays on this website for the past couple years. I love doing them and so I'm glad you like reading about them. This third most popular essay from last year details my stop in Denver, Colorado to visit the statue honoring the life and music of John Denver. That same trip also took me to Boulder where I located the house used in the exterior shots of filming the TV series Mork & Mindy. What's your favorite John Denver Christmas program? Which is your favorite Mork & Mindy holiday episode? I can't decide either.

I wrote three more essays on pop culture destinations last year--did you see them all?

And, New York City's Christmas pop culture destinations which included a visit at the final resting places of actor Jerry Orbach, and Clement C. Moore--the author of the poem "Twas the Night Before Christmas." I also made a stop at the favorite watering hole of writer Dylan Thomas, who wrote "A Child's Christmas in Wales" which has been wonderfully adapted for film and TV several times. Yes, I did quite a bit of traveling last year. Whew! 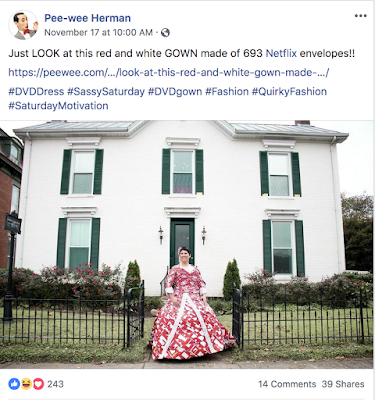 Last year, Netflix's DVD subscription service was celebrating their 20th anniversary and I persuaded them to sponsor my collection of Netflix paper envelopes to be turned into wearable art! I wrote about the experience and Netflix revealed the photos of the dress in November. The fashion designer I hired worked hard for months transforming almost 700 red paper envelopes into a dress inspired by Rosemary Clooney's red gown seen in the finalé of the 1954 movie White Christmas. As a Netflix subscriber for 13 years, I had saved over 1,5000 envelopes from the research that I do writing about Christmas on TV and in film. This project brought all my interests together into one experience. I was invited to take the photos of the dress at The Rosemary Clooney House museum in Augusta, KY--the white building seen above. The project ended up going viral across the internet and was even shared on Pee-Wee Herman's website and social media. To keep that all in perspective, this was only the second most popular essay in 2018.

As a part of the Classic TV Blog Association's blogathon on TV villains last year, I created a list of my top five favorite Rankin/Bass animated Christmas evildoers. It was super fun to put the list together so I'm happy so many people enjoyed reading about them too. If you haven't yet read this one, you'll be pleased to discover that I went further than discussing only five baddies.


Curious about the all-time most popular posts from this website? Clearly TV variety remains a nostalgic favorite. Check out the links:

Thank you for reading all year long. Please feel free to leave questions or comments below.