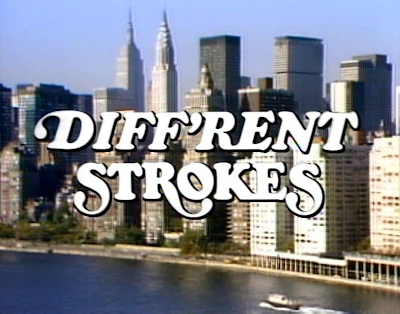 Happy February! It's Black History Month again. I enjoy honoring BHM each year on my blog because there are many noteworthy Christmas episodes, specials, and TV movies with exceptional African-American cast members. There are also numerous outstanding or touching Christmas TV story lines aimed at black audiences. Please indulge me while I highlight another of my favorites.


The sitcom Diff'rent Strokes produced two Christmas installments, a clip show in 1978 and this second one in 1982. The fifth season episode "Santa's Helper" sees young Arnold in need of money to buy Christmas presents. Rather than ask his father for money, Arnold looks for a way he can earn it.

On the street, Arnold meets Mr. Jones, a bell-ringing Santa Claus collecting money for an orphaned children's fund. Mr. Jones is sympathetic to Arnold's need for money and once he learns that Arnold lives on Park Avenue, he invites the boy to join him in his charity drive. Jones promises Arnold a small percentage of the charity money collected by Christmas.

Happy to raise awareness for a good cause, Arnold eagerly applies himself to the task. Jones and Arnold sing Christmas carols and ring bells for the people on the sidewalk.

When Mr. Drummond walks past the street corner Santas, he recognizes his son behind the beard. Young Arnold is pleased to show his father that he's working for his Christmas money.


On Christmas Eve, the family gathers around the Christmas tree excited to see the brightly decorated packages underneath. A surprise guest arrives and it's Mr. Jones as Santa Claus delivering Mr. Drummond's gifts for Willis, Kimberly, Arnold, and the housekeeper Pearl. Despite being paid well for his appearance, Jones returns in the middle of the night to rob the Drummond home of its gifts and valuables. When the family awakens early Christmas morning, they are shocked and saddened by the theft. Mr. Drummond explains that they have insurance to cover the missing valuables but Kimberly, Willis and Arnold feel let down by the thieves' lack of holiday spirit.

In the afternoon, Arnold reports to work for the last day to collect for the orphans' fund. Mr. Jones listens as Arnold explains what has happened to his family and how they feel about missing out on exchanging gifts. Mr. Jones remarks that whoever stole from the Drummond family must be someone who has great needs. Yet Arnold won't accept this justification--he explains he has known poverty himself and knows the ethical difference between stealing and living without. Despite his frustration, Arnold carries on with his last day at work.


As Christmas day continues, the family gathers for the holiday meal. They decide to cheer themselves up by discussing what gifts they intended to exchange. Feeling better, they hear the door bell ring to find the Christmas tree, their gifts and valuables being returned to them. This surprise is welcomed by everyone but the robber's behavior is mysterious--who would do this and then change their mind?


Not a mystery to Mr. Drummond, we see him take one more visit to see Mr. Jones on Christmas day. Drummond thanks Jones for returning the stolen items and explains that he's offering him a second chance at life to change his ways. He reveals that he won't share his name with the police. A grateful Jones gladly returns to his charity work for the rest of the day.


I remember this uncomplicated holiday story felt satisfying when I was a young viewer. For those not old enough to remember the original run of this sitcom, the series was a TV phenomenon beyond explanation. Young Gary Coleman was a charming, larger-than-life actor that helped popularize this family show, and many other TV projects including TV movies and a Saturday morning cartoon series. I still see t-shirts for sale emblazoned with the Diff'rent Strokes catchphrase "Wha-choo talkin' 'bout Willis?"

Looking back on this series from a 21st century perspective, a wealthy white family adopting two poor black kids from Harlem seems like an incredibly patronizing scenario to base a show upon. I think we can still honor the series for bringing young African-American characters into America's living room each week at a time when it was still all too rare.


Another reason to remember this episode is the appearance of comedian/actor Garrett Morris as Mr. Jones. His Santa Claus convinces us that Mr. Drummond was right to offer him mercy. You know Morris--he's been on TV and in film quite a bit. Not only has he regularly appeared on Martin, The Jamie Foxx Show, and more recently on 2 Broke Girls, but he was one of the original cast members of Saturday Night Live. His outstanding performance of the song "Winter Wonderland" on the 1975 SNL Christmas show is one of the classic sketches that is often repeated each year in their holiday clip show collections. (I wish I could share the video but it's not available.)


How do feel about the fifth season Christmas episode of Diff'rent Strokes?  Got a favorite early 80s sitcom holiday episode? Feel free to share your comments below.