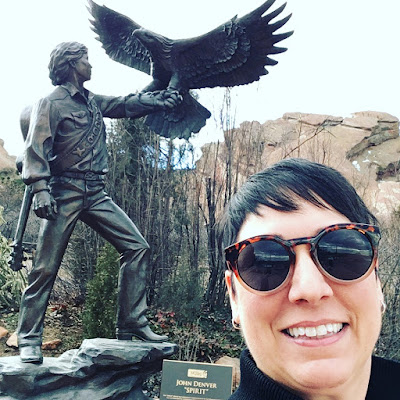 This sculptural tribute to the memory of singer/songwriter John Denver was easy to find. It stands beside the Colorado Music Hall of Fame museum, just outside Denver.

If you're not quite sure why the Christmas entertainment writer would go out of her way to see a John Denver statue, let me take you to school. The 1979 TV special John Denver and the Muppets: A Christmas Together casts a long shadow.

Even if it has never been officially released on home video, the soundtrack is easily available and I still hear their version of "The Twelve Days of Christmas" on the radio each holiday season. However, there's more: John Denver had three other outstanding holiday TV specials too, including 1975's John Denver's Rocky Mountain Christmas, 1988's John Denver's Christmas in Aspen, and 1991's John Denver: Montana Christmas Skies. He guest starred on other Christmas variety specials too--and he even played the lead in the 1986 CBS Christmas TV movie The Christmas Gift. For many fans, John Denver is closely connected to Christmas entertainment. 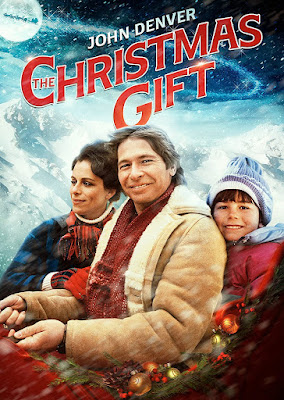 I decided to step into the Colorado Music Hall of Fame too. Jackpot! They have a large collection of John Denver items on display.


On display are gold records, personal clothing items, movie memorabilia, one of his guitars, and more. There's even a display about the singer's admiration for the conservationist and explorer Jacques Cousteau. It was pretty cool. And, admission to the museum was free.

Friends told me to check out Red Rocks Ampitheatre while I was out that way and I was a little worried about finding a second location. What my GPS didn't communicate clearly was that Red Rocks is literally across the street from the museum. I couldn't have missed it.


As long as they aren't setting up for a concert, the gorgeous outdoor facility is open to the public. So I walked across the road and entered the grounds. There's a fascinating museum with displays on the history of the unique natural ampitheatre too. This place is a must-see destination for music lovers.


As I was posting photos of my trip to Colorado on Instagram, friend Big Mike (from Discovery Family's Lost & Found with Mike and Jesse) told me to go find Mork & Mindy's house in Boulder, about 30 miles outside Denver. Uhm...okay! So I did. I placed the street address in my GPS but driving down the road I spotted it immediately. It looks pretty much the same as it did in the late 1970s. It's located in a residential neighborhood in Boulder, Colorado.

If you'd like to return to any of my previous Christmas pop culture landmark visits, click on the following links:

If you've ever visited a Christmas pop culture landmark that you would recommend, let me know. I love to travel. Feel free to leave a comment below.