What I Did on Summer Vacation: A Christmas Story House 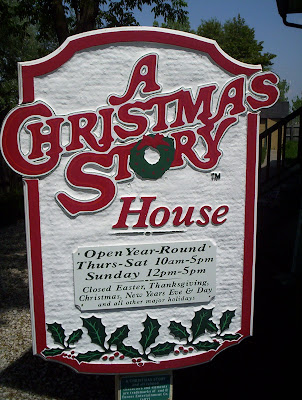 Sunday, May 22nd with the sun shining and temps hitting the low 80s, I made the glorious journey to Cleveland, Ohio to visit A Christmas Story House and Museum. You may remember that this film's story about Ralphie Parker and his quest for a Red Ryder BB gun at Christmas takes place in Hammond, Indiana. However, many scenes of the 1983 film were actually shot in Cleveland, Ohio. The house used for shooting in the film has since been turned into a hip destination spot and includes a museum and a gift shop across the street. 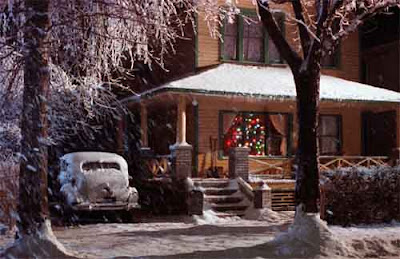 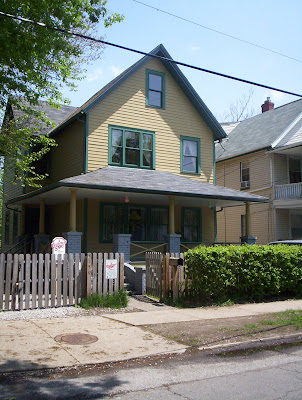 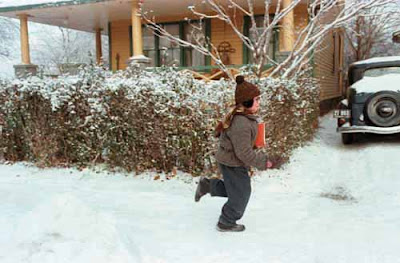 I was living in Northeast Ohio in the early 1980s when this film was originally shot. I actually remember seeing the call for extras to come to downtown Cleveland for the filming of the scenes for the Christmas parade and the shots in front of Higbees and the Christmas window displays. But as a young teenager, I blew off this opportunity--never expecting to become someone who would see A Christmas Story a million times and end up making a career writing about it and other Christmas entertainments!? Oh well. In a weird side story, I DID stand in line for four hours to audition to be an extra in what became the 2000 Mel Gibson and Heath Ledger film The Patriot. Despite my obvious dedication, they didn't pick me to appear in the film :( 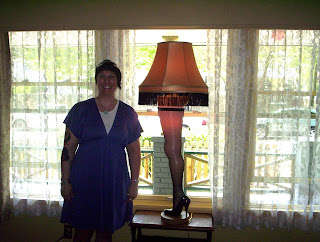 Inside A Christmas Story Home, you will find reproductions of period 1930s-1940s furnishings and decorations. They encourage people to wander the home and photography is permitted. The above photo of myself was taken inside the House next to the Leg Lamp that stands in the front window. Across the street at A Christmas Story Museum, you will find actual costumes and items used in the filming of the original movie as well as photographs shot during the making of the film. Don't miss either venue--and the price of your ticket covers both buildings. However, photos are not permitted inside the museum.

I recommend coming down to see the house, museum and gift shop in Cleveland, Ohio. Tours are conducted year round and begin every half-hour during their open hours. Check the website for prices and hours. On the random May afternoon that I attended, there were people from Texas, Wisconsin and cities throughout Ohio in attendance. This is definitely one of those pleasant places where it feels like Christmas all year long. Be sure to let me know if you make the trek--I'd love to hear about your adventure. 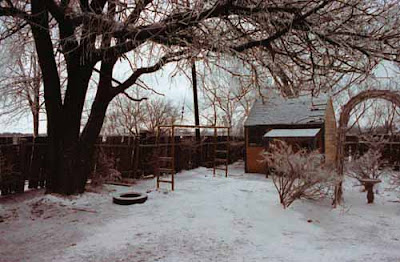 A still from the 1983 movie of the back yard where Ralphie met Black Bart--and nearly shot his eye out!
Then...and now: 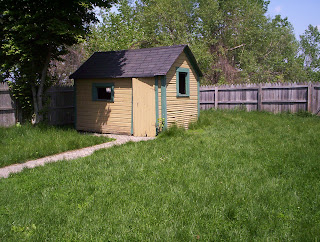 The backyard as it looks today--the shed still stands :)

Last July, I made the journey to several locations of the exterior shots for the 1977 Christmas TV movie The Gathering. I took photos from these locations and they were posted on the blog Made for TV Mayhem--a site dedicated to made-for-TV movies and other entertainments. Though the story in the much-beloved movie, The Gathering, takes place in snowy New England, both the house and some of the outdoor locations were shot here in Northeast Ohio (Hudson, Ohio and Chagrin Falls, Ohio). Click here to see that post again. And, while you're at Made for TV Mayhem, you should check out the rest of Amanda's site and follow that amazing blog :)
Posted by Joanna at 11:20 PM

Email ThisBlogThis!Share to TwitterShare to FacebookShare to Pinterest
Labels: A Christmas Story, The Gathering