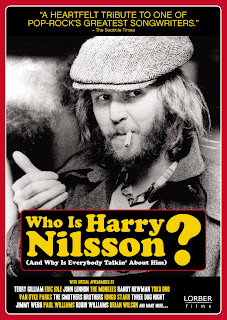 I was so busy last year promoting The Christmas TV Companion and getting the encyclopedia, Tis the Season TV, to print that I had to put off watching most new movies that I wanted to see. One movie that I finally have had a chance to catch is John Scheinfeld's 2010 documentary "Who Is Harry Nilsson? (And Why is Everybody Talkin' About Him)."

As it is explained in the movie's beginning, Harry Nilsson is just one of those people whose name you either recognize immediately or someone you've never heard of before. If you've never heard of Harry Nilsson, you should know that Eric Idle, Terry Gilliam, Robin Williams, Yoko Ono, Micky Dolenz, the Smothers Brothers, Randy Newman, Brian Wilson and Van Dyke Parks--among others--actually appear in the doc to talk about their friend, singer/songwriter Nilsson. If that doesn't intrigue you, forget it. The brilliant and stubborn, musical genius' influence touched not just record buyers but others working in the Industry with a legacy that's still widely felt.

As a pop culture junkie, Nilsson's music continues to come up again and again in my life and my work. Those who attended my birthday celebration just last weekend know that I had the movie Midnight Cowboy screening on my television throughout the evening. Nilsson sang the movie's theme song, "Everybody's Talkin'," for which he won a Grammy. And, in my work, I've written about the Emmy award-winning animated Christmas TV special, Ziggy's Gift, with music and lyrics written by Harry Nilsson. 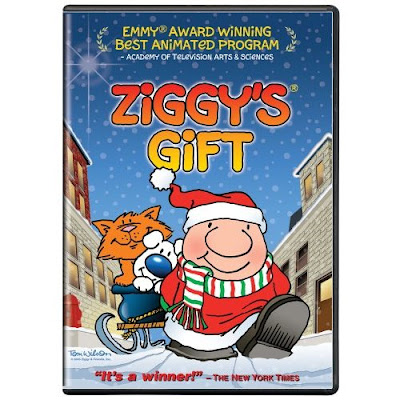 This 1982 animated special is based on the familiar comics character created by Tom Wilson. Though I haven't seen it on TV in years (have you? what network?), I do know that this half-hour classic is easily available for watching on DVD.

If you watch just the first few minutes of this Christmas classic, you'll hear the beginnings of that original Nilsson-style music that runs throughout the TV special. Though Harry Nilsson died in 1994, thankfully his music is still with us. People often ask me why I'm attracted to watching and writing about Christmas on TV and this is the sort of thing that springs to my mind. Though Christmas entertainments sometimes have the reputation for being trite, simplistic and crass, there are actually an abundance of high-quality productions--such as Ziggy's Gift--made by incredible people--Harry Nilsson--that have the power to touch our lives. Mine is not a bad job, indeed.

Though he didn't write it, this is perhaps the song he is most famous for singing.
Posted by Joanna at 3:21 PM