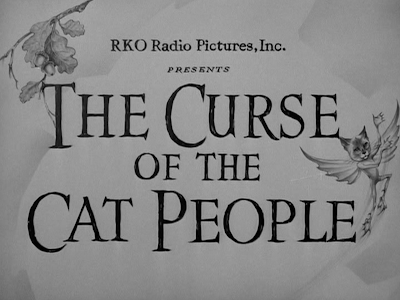 Many of us are already getting ready for Halloween. It's fun to anticipate the autumn holiday by spending the month of October watching horror movies. And many Christmas movie fans like to spend the month of October watching the dozens of Halloween/Christmas cross-over films and TV programs too. In that spirit, I'd like to remind you about the 1944 movie The Curse of the Cat People, directed by Gunther V. Fritsch and Robert Wise. This delightful black-and-white classic includes both horror elements and significant Christmas scenes.

The Curse of the Cat People is a sequel to 1942's Cat People. The first film tells the tragic story of Oliver Reed (played by Kent Smith) who falls in love with and marries Irena (played by Simone Simon), a fashion illustrator who believes she's cursed based on a folktale from her Serbian hometown. Irena becomes consumed by fear that her passions will transform her into a monstrous beast--a deadly cat--a fear which ultimately dooms her marriage and her life.

The black-and-white film's story is told with gorgeous extreme lighting, showing off dramatic shadows. The story expresses the themes of Romanticism--remember studying late 18th century-early 19th century Romanticism from literature and art classes? This is a rejection of Realism. Nature (and animals) are wild, threatening, and dangerous. And, the film's story becomes even richer if you begin to recognize the dichotomies set up within the story. The tension between these dichotomies is what fuels the story's interest and moves it forward. (Think of the tension between the rational and the irrational, the civilized and the animalistic, reality and fantasy, the male and the female, et al).

I'm pulling some of these threads out because the follow-up movie The Curse of the Cat People continues to draw upon the same themes. While I don't think it's necessary to see the first movie to follow along with Curse, your experience of Curse will be much richer if you've seen the first movie. I recommend watching both movies as a double-feature--you'll love it.


The Curse of the Cat People follows the characters from the first movie, at least seven years in the future. Oliver (Kent Smith again) and Alice (played by Jane Randolph in both movies) have married, and they have a six year-old daughter named Amy (played by Ann Carter). Amy doesn't get along with the other children in her school and she doesn't have any friends. Amy doesn't seem to know the difference between reality and fantasy, between lies and the truth. She's known as a dreamer, and she spends most of her time alone in her garden enjoying her time with nature. Her father thinks there's something wrong with Amy. She's most comfortable using her imagination rather than pursuing math and rational thought like he does--he's a boat designer/engineer.

After walking past a spooky house in the neighborhood, Amy approaches it and she's given the gift of a ring from a stranger in the window. Her parents want her to return the lavish gift but when she goes back, Amy is invited into the home to meet the old woman Julia Farren who lives there. The old woman insists that Amy keep the ring, and she and the young girl strike a bond. Farren is a former actress from the stage and she immerses herself in fanciful stories--just like Amy. Here, Amy hears Washington Irving's story of The Headless Horseman for the first time. Later, Amy makes a wish on her ring, expressing her desire for a friend.

Amy's wish for a friend comes true when a beautiful woman named Irena keeps her company in the garden. Oliver is happy that his daughter is kept occupied in the backyard not fully aware that she's actually playing with someone he can't see! (Don't bother trying to nail down whether Irena is from Amy's imagination or a ghost. That will only reduce the experience).


At Christmas, the family decorates the tree together and carolers arrive at the door. Amy hears her friend Irena also caroling in the garden and she joins her there. Amy offers a gift to her friend which Irena graciously accepts. Days later when they are taking the Christmas tree down, the family takes out the photo album and young Amy sees a photo of her father and his first wife Irena. She identifies the woman as her friend in the garden and her father insists she's lying. Spoiler: Irena's death came before Amy was even born. And, he punishes his daughter. Confused, Amy still doesn't understand the difference between reality and fantasy and why she's being punished, so she runs away.


The young girl runs away into a storm on a dark night, through the woods behind her house. At one point she is covered in snow, laying along the ground. She ends up running to Julia Farren's home, seeking the comfort of the old woman who seems to understand her. Unfortunately, Julia's daughter Barbara is jealous of her mother's affection for Amy. The end is very satisfying so I won't spoil it. This is certainly a film best enjoyed when one experiences it for themselves. So I'll leave you to it.

If you aren't already familiar with this movie, I encourage it as a Halloween and Christmas cross-over. It's also one of those horror movies that isn't a slasher and contains no blood or gruesome scenes. (The photo of the hands above is the most horrifying image in the film--and is very restrained). If slashers are not your style or you're looking to experience something more thoughtful and different, this is the movie for you.

If you're looking for more suggestions of Halloween and Christmas cross-over movies and TV programs, follow by daily posts at @TistheSeasonTV on Twitter, and Tis the Season TV on Facebook. Merry October! 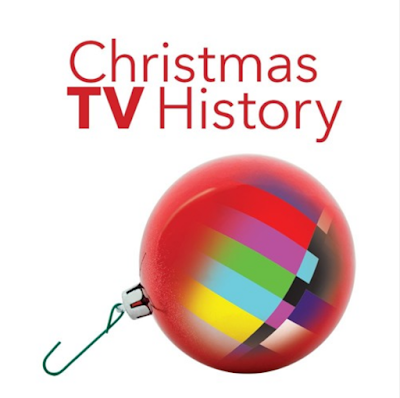 This past summer I created the Christmas TV History podcast--a five-part audio series which attempts to give a "big picture"view of what Christmas on TV and in the movies looks like. There are five installments: an introduction, the history of Christmas animation, the history of Christmas TV movies, yuletide variety specials and episodes, and Charles Dickens’ A Christmas Carol adaptations. Why these topics for the episodes here? These are the most discussed formats and topics that I’m asked about. I hope you find the audio series satisfying.

You can find the Christmas TV History podcast on Apple Podcast
Stitcher
Soundcloud
Podbean
or, you can listen to it on your computer or phone from my website HERE.


This audio series has come about because I've been working on finalizing the expanded and updated, 2nd edition of the encyclopedia Tis the Season TV coming out next year (anticipated release date: late 2020). I’ve been researching and writing about Christmas entertainment for nearly twenty years. It’s one thing to gather data for the encyclopedia and another thing to synthesize the information. I’ve never been in a better place to share more about what I’ve learned.

I’m a firm believer in examining popular culture—most importantly here, Christmas entertainment—so we can better understand ourselves through the stories we tell and connect with. Considering there are thousands of Christmas episodes, specials and TV movies, and so little scholarship on it to this point, I can say it is a body of work that is under-appreciated despite the big business the TV and film industry knows it to be. Looking back into the history of television, I can clearly see that yuletide programs have been a part of every format in TV, proving that Christmas TV History is TV history. 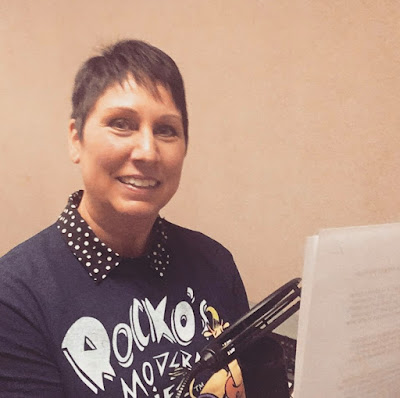 I’m also doing this audio series as a first step toward writing about Christmas TV History for a collection of essays that will eventually be published in print as well. The written essays will be much longer, have more depth, and refer to more examples. Starting the conversation in these fairly short, 30-minute audio episodes allows me to share some of this information now.

More installments are possible in the future—I can certainly discuss the history of sitcom/comedy Christmas episodes, theatrical-release Christmas movies, interesting adaptations of O. Henry’s “Gift of the Magi,” all 20 Rankin/Bass animated Christmas and New Year’s programs, the history of filmed adaptations of E.T.A. Hoffmann's The Nutcracker—the potential list goes on and on. If you like this series, feel free to drop me a line and suggest a potential topic for a future installment.