As Halloween approaches, many TV viewers love indulging in Christmas horror stories this time of year too. One episode of the horror series American Horror Story: Apocalypse caught my attention.

If you haven't yet seen it, season 8's Apocalypse series centers on witches and warlocks caught in a fight for survival during a nuclear apocalypse. The seventh episode "Traitor" includes several scenes serving as backstory on the witch character Bubbles McGee, played by Joan Collins. While the episode "Traitor" is not set at Christmas, the backstory scenes about Bubbles take place on set while filming a Christmas horror movie. 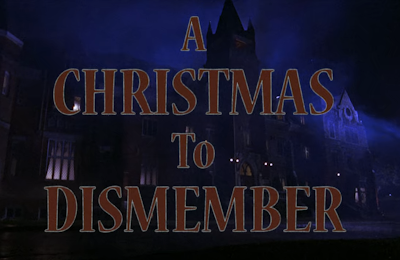 Within the episode, we see Bubbles filming the horror movie "A Christmas to Dismember."

Yes, Joan Collins as Bubbles McGee stars in a horror movie in which she plays a wife who murders her husband at Christmas time. While cleaning up his corpse, there's an unexpected knock at the door!

There's an unexpected Santa Claus at the door but the wife refuses him entry. She later hears on the radio that a dangerous man has escaped from a nearby asylum.

The scenes of the filming of the Christmas horror movie in "Traitor" end with the dangerous Santa Claus coming at the wife, the director calling "Cut!" and then Bubbles McGee walking off set. She's approached by her colleague who nastily quips that McGee has made the same tired movie before, even mentioning 1972.

Any of this sound familiar? It should. This is a delicious nod to the Christmas segment in the 1972 movie Tales from the Crypt starring Joan Collins as a murderous wife and a killer Santa Claus. I wrote about that movie on this website before--click HERE to see it again.

The same story was adapted again for the HBO series Tales from the Crypt in 1989 in an episode entitled "And All Through the House." Click HERE to see what I wrote about the TV series adaptation.

Joan Collins participating in a tribute to this Christmas horror classic is amazing! Even though this is just a small bit within the episode, and a brief moment within the overall series--it's a memorable nod to an influential horror movie. It's also a significant TV mention of a fan-favorite Christmas horror story.

Did you catch this reference to the 1972 movie Tales from the Crypt when you watched the eighth season of American Horror Story? Are you a Christmas horror fan? Let me know in the comments below. Happy Halloween!

Posted by Joanna at 8:47 PM No comments: