Where to Watch Christmas TV Programs in 2021

It's the most wonderful time of the year, isn't it? The Christmas TV movies have already begun airing, Christmas music is playing on local radio stations, the days are growing shorter, and the air outside is crisp.

The viewing options for Christmas movies and specials during November and December each year are overwhelming--even for me. Last year, I counted over 400 new Christmas and New Year's TV programs and movies released and this year is already well beyond last year's numbers. Let me help you with the details of where to find the best holiday programming for 2021. This is not an exhaustive list and new information is still being released. However, this is where you will find the majority of new holiday programming airing this year.

For many holiday movie fans, the Hallmark Channel is the first name in Christmas TV movies. This year alone, Hallmark Channel, Hallmark Movies & Mysteries, and their streaming platform Hallmark Movies NOW are debuting 41 new Christmas TV movies, alongside many previously released classics from their archives. If you didn't already know, the movie marathon has already begun--Hallmark started Friday, October 22th--and continues all day and all night through the end of December. Hallmark typically debuts their new holiday movies on Friday, Saturday and Sunday nights. Hallmark Movies & Mysteries' new movies debut this year on Saturday nights. Hallmark Movies NOW streaming platform will debut their one new movie "Every Time a Bell Rings" on Nov. 18th.

HERE is link to a checklist of Hallmark's Christmas TV movie premieres. The daily schedule of their holiday movies can be found on their website HERE.

Click HERE to see the checklist of Hallmark Movies & Mysteries' new Christmas movies for 2021. HERE is the link to HMM daily schedule on their website.

Lifetime is debuting 35 new Christmas TV movies in 2021 as well. I know, right? In order to stay competitive, Lifetime has scheduled their movies in a clever way. They don't start debuting movies until Nov. 12th, on Saturday and Sunday night. Then starting on Thanksgiving Night, they debut a new Christmas TV movie EVERY NIGHT until Christmas! EVERY NIGHT! Yes, every night. Check the schedule and see for yourself. No more reruns on Monday, Tuesday or Wednesday nights.

HERE is a link to Lifetime's website with more info about their movies this year. 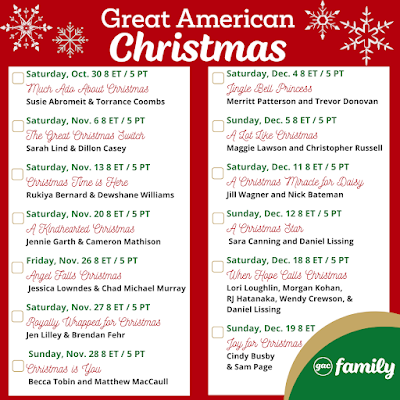 A new cable network rebranded this September as GAC Family is also jumping into the Christmas TV movie game. They are debuting 12 new movies this year--and one Christmas episode of the series When Hope Calls (a former Hallmark series picked up by GAC). There's a tremendous amount of buzz about these twelve new Christmas movies because GAC Family has worked with several production film companies to get their movies--the same companies that also make movies for Hallmark. So many of these GAC Family Christmas movies feature the same actors and creatives from other Hallmark Christmas movies.

If you don't have cable TV to watch GAC Family, you can also use the app Frndly to watch their new Christmas movies. HERE is a link to the GAC family website with more info on their movies and schedule. 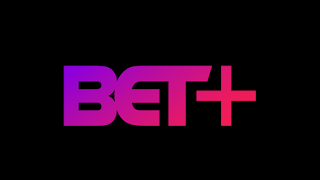 BET and their streaming platform BET+ are committed to Christmas TV movies. After a huge success last year, they are debuting 8 new Christmas movies in 2021. Click HERE for a list of those movies.

As usual UpTV is also debuting a full schedule of Christmas TV movies too. For those that love Christmas movies about royalty, this year UpTV is premiering the third movie in the franchise Christmas with a Prince: The Royal Baby. Click HERE for a link to the cable channel's website with more info about their Christmas TV movies. 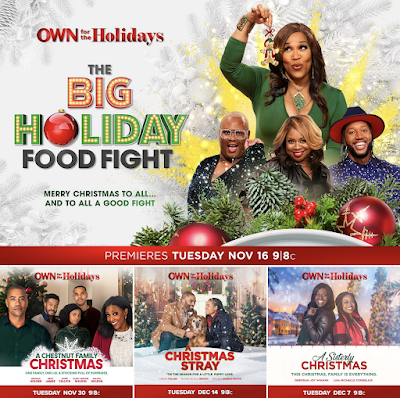 OWN usually debuts several Christmas TV movies and this year is no different. They have three new movies and The Big Holiday Food Fight series--a cooking competition show, hosted by comedian Kim Whitley. I like those holiday cooking competition series--this should be good. OWN's holiday programming airs on Tuesday nights too which makes it easier to watch. There are TOO MANY holiday programs on Sunday nights--amiright?

Ion Television is debuting four new Christmas movies and airing their previously released ones too. You can find these movies airing on Sunday nights, Christmas Eve and Christmas day. Click HERE for the Ion TV schedule on their website.

Freeform is once again airing their 25 Days of Christmas programming block. Unlike in years past, I don't see any new original programming on the schedule this year. That's okay--Freeform is owned by Disney, and ABC and Disney+ are premiering new programming.

And, the Food Network is rolling out their holiday programming too. Their baking competition series have already started, including Holiday Baking Champions, Holiday Wars, Christmas Cookie Challenge, The Big Bake: Holiday, and more. These series are mostly airing on Mondays and Thursday, but repeat throughout the week. 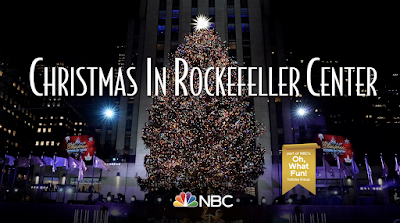 Of course, the major networks have their holiday programming as well. NBC's Christmas in Rockefeller Center airs Wed. Dec. 1st. The annual tree lighting ceremony and live concert always airs the first Wednesday after Thanksgiving. That TV special is followed this year by Kelly Clarkson Presents When Christmas Comes Around music special. The annual Saturday Night Live Christmas clip show airs this year on Thursday, Dec. 16th. And, the 1946 movie It's a Wonderful Life will once again air on Christmas Eve. 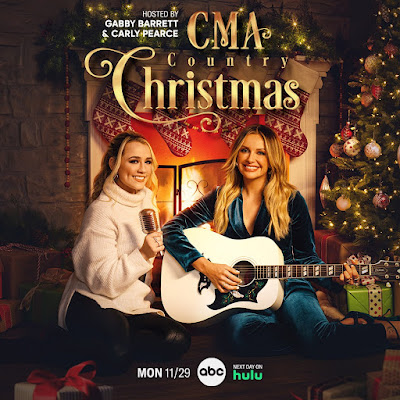 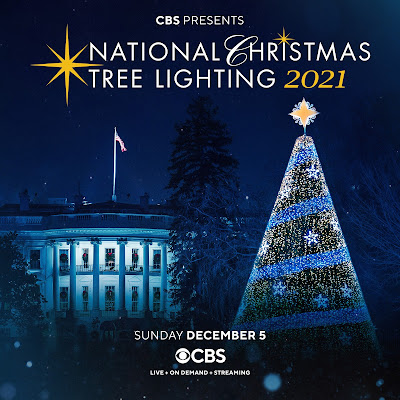 On CBS, viewers can once again enjoy Rankin/Bass' Rudolph the Red-Nosed Reindeer on Nov. 22nd, the animated classics Frosty the Snowman and Frosty Returns airing on Nov. 26th, two Robbie the Reindeer animated specials and The Story of Santa Claus will air on Nov. 27th, the annual music concert that pays tribute to adoptive and foster families A Home for the Holidays and The National Tree Lighting Ceremony and concert are on Dec. 5th. Dec. 31st there's a New Year's music special New Year's Eve Live: Nashville's Big Bash. This year, CBS is also debuting two new Christmas TV movies: A Christmas Proposal on Dec. 12th, and Christmas Takes Flight on Dec. 19th. It's been a long while since CBS premiered holiday TV movies so this is a must-see experience. 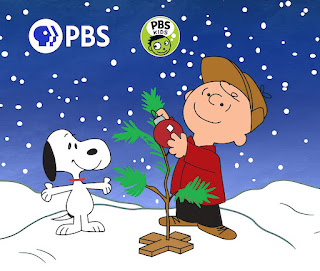 And, A Charlie Brown Christmas which is available on Apple+ will also air on PBS this year on Dec. 19th. 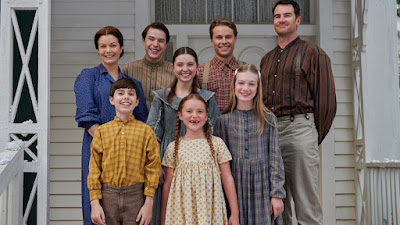 The CW is debuting a TV movie The Walton's Homecoming--a remake of the 1971 TV movie The Homecoming: A Christmas Story airing on Nov. 28th. On Dec. 1st, they're airing Beebo Saves Christmas, Christmas Around the World on Dec. 8th, The Greatest Holiday Commercials on Dec. 12th, and more.

Stay close to my social media links for more announcements about fantastic holiday programming. If you'd like reminders of the new Christmas TV movie debuts and other exciting holiday TV  programming, don't forget to follow my Facebook page Tis The Season TV and/or my tweets at @TisTheSeasonTV.

Where on the metaphorical television dial do you watch your favorite Christmas movies and specials?  Feel free to share in the comments below.

Posted by Joanna at 3:36 PM No comments: