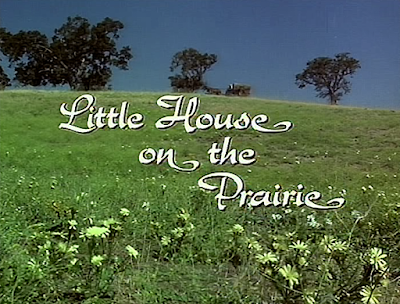 Got your summer travel plans already? How about for next year? You know me, I love journeying to pop culture destinations. Let me share photos with you from a trip I took last month. I recently re-read the whole series of Little House books written by Laura Ingalls Wilder. So I packed my bags to visit a couple of the real-life sites mentioned in her books.

Just like everyone else growing up in the 70s, I watched the TV series Little House on the Prairie. I'm a big fan. After re-reading the entire book series, it has been fun re-watching all nine seasons of the TV series too, making note of all the changes in the series that are different from the books. I'm such a nerd, I think that's fun!

Want to re-visit three discussions of the Christmas episodes from the TV series? Click on the titles for the links:

In May, I visited Minneapolis, Minnesota--you remember I stopped at the Mary Tyler Moore Show house and statue. Click HERE to see that visit again. While in Minnesota, I decided to head to the southwestern part of the state and visit the real-life sites of the Ingalls family and the museums dedicated to them. (If you didn't already know, Laura Ingalls Wilder actually lived in six different states in her lifetime and there are museums or markers in each of those historic locations).

Driving the 150 miles from Minneapolis to Laura's hometown in Walnut Grove, I found myself thrilled to drive through Mankato and Sleepy Eye too--both are real-life cities that are also mentioned in the TV series! 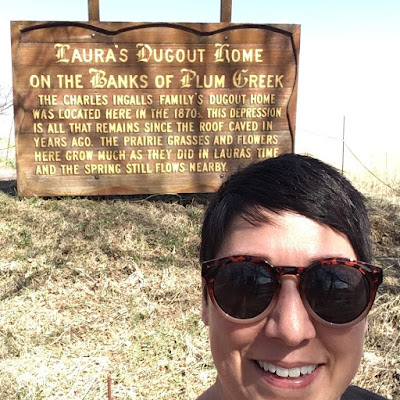 Just outside of Walnut Grove is Plum Creek and the site of the original dugout where the Ingalls family lived. The site is located on farm property privately owned by a family that allows access to the public. Although the original dugout has since collapsed and disappeared--a reasonable reclamation by nature for a 140 year-old structure--the site is worth the visit. The waterway still seems to match every romantic description from Laura's book On the Banks of Plum Creek. We easily spent a pleasurable afternoon there soaking up the sun and imagining our favorite scenes from Laura's writings happening before us. If you haven't read the books and only know the TV series--this real-life location is still depicted in the show.

It was a beautiful Spring day in May when we were there but less than 30 days before, the area had experienced a severe snow fall. More than 2 feet of snow had shut down much of Minnesota. We were grateful to have missed it all.


In downtown Walnut Grove (it's a one stop-light town!), we found the Laura Ingalls Wilder Museum. Out of all the Laura museums around the country, this is the one most dedicated to collecting memorabilia from the TV series.


The museum here is a collection of buildings that house the TV memorabilia, Ingalls family items, and recreations of pioneer life. You could easily spend an entire afternoon here and much of it is designed for children. I gravitated towards the TV items displays, of course!


The museum in Walnut Grove and the dugout at Plum Creek (just a few miles apart) are enough to keep a traveler busy for a day. However, two hours drive further west takes you to DeSmet, South Dakota--another important stop for fans of Laura Ingalls Wilder and the TV series. If you've read the Little House books series, then you recognize that Laura's life in DeSmet takes up five of the nine books! So west I headed, from Minnesota to North Dakota, spending another full day steeped in Ingalls history.


Visiting DeSmet is a must-see experience for Little House readers and fans. There is quite a bit established here just for tourists. It's another small town so you can't come through here and miss it! In real life, the Ingalls family was one of the city's first residents. Charles was working for the railroad, saving money to finance another homestead. The family was given the opportunity to stay over for the winter in the railroad surveyors' house and they did that so Charles could be one of the first to file his claim in the Spring. The original surveyors' house is now a museum, as are several other buildings. Historians have also mapped the downtown area with all the references from Laura's books. This is a real treat for fans of the books and those that admire Laura from the TV series.


Many others looking to homestead further west along where the railroad was built joined the Ingalls family in the growing town. DeSmet is where Laura spent her teenage years, where she received most of her education, and where she met and married her husband Almanzo Wilder.

This visit to DeSmet reminds visitors that the rosy picture Laura paints about homesteading is misleading. In reality, Charles was never much of a successful farmer--in fact, too few on the plains ever were. This home he shared with his family most of his life was actually in the city. If you're interested, the 2018 Pulizer Prize-winning biography this year Prairie Fires: The American Dreams of Laura Ingalls Wilder by Caroline Fraser details the difficulties of homesteading for the Ingalls family and discerns between fact and fiction.

In DeSmet on the site of the original Ingalls homestead, there is another tourist destination that teaches about pioneer life. Although everything there is a recreation of homesteading, it is worth noting that there still remain five cottonwood trees Charles Ingalls planted--one for each of the five women in his life (wife Caroline, and four daughters Mary, Laura, Carrie, and Grace).


Even though I knew there was nothing to see but the sign, I still made a point to drive just outside of DeSmet to the original location of the homestead worked by Laura and her husband Almazo Wilder. This is also the place where their daughter Rose was born. When Rose was still quite young, the Wilders packed it all up and moved to Missouri for greener pastures, as they say. Yes, Laura had her father's wanderlust for homesteading. Rose would grow up to be a writer and encouraged her mother to write as well. That's how we ended up with the Little House books. Even though the spot where Laura and Almanzo's homestead used to be is now just a field used for farming, I lingered and recalled her descriptions of her home from the books. It still was a powerful experience.

I stopped at the DeSmet cemetery too to play my respects to the final resting places of the Ingalls family. Laura and Almazo are buried in Missouri where they lived most of their lives, however the rest of the Ingalls family are all buried here. Charles, Caroline, Mary, Carrie and Grace all have headstones together. In nearby plots, you'll also find markers for neighbors who filled the Little House books including the Boasts and the Loftus family.

There's quite a bit to see and do for Little House fans in Minnesota and South Dakota. I know there are museums and markers in other Laura destinations too, including Wisconsin, Kansas, Iowa, and Missouri. Whew!! I feel like I'm still processing all the experiences for just these few days in Laura's personal history. Do you have a favorite pop culture destination that you've visited?

In case you haven't seen them yet, here are links to some more pop culture destinations connected to Christmas: