Little House on the Prairie Christmas (1981) 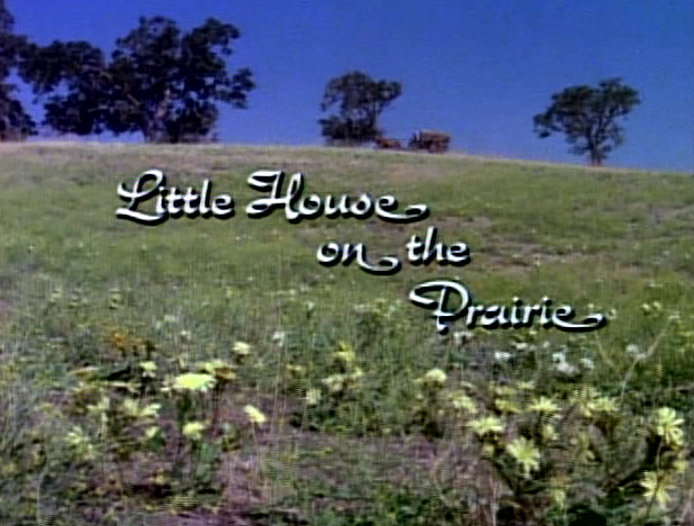 I've heard it said that a television series' best Christmas episode is the always the first one produced.  That's not always true but it seems generally true.  However, the eighth season episode of Little House on the Prairie might be the exception to the rule.  A few years ago, I wrote about the first season Christmas episode of LHOP which is an adaptation of O.Henry's short story "The Gift of the Magi."  Let me remind you of the outstanding eighth season episode entitled "A Christmas They Never Forgot" and then you tell me which of the two episodes is your favorite.

1981's "A Christmas They Never Forgot" begins with Hester Sue arriving at the homestead to share Christmas Eve dinner with the Ingalls family.  As a surprise, she has brought with her Mary and Adam who have just arrived by stage from New York.  This Christmas is a special one with the expanded family and their friends gathered together around the dinner table--there's Ma and Pa Ingalls, Mary and Adam, Laura and Almanzo, Carrie and Grace, Albert, James and Cassandra, and Hester Sue.  After the meal, they notice that a snow storm has made it impossible for the visitors to leave--and everyone begins preparations for spending the night at the Ingalls' home.

As the children one by one drift off to bed, the adults continue the conversation around the dining table.  Asked about her beautiful necklace, mother Caroline shares a story of a previous Christmas when she was given the piece of jewelry.  We see Caroline's story as she tells it, as a reflection back to the time when she was young--just about Carrie's age, she explains.  The first Christmas after her father died was also the first Christmas she was spending with her new stepfather.  Caroline was still grieving the loss of her father and feeling a bit angry about having to spend this difficult time with her mother's new husband whom she considered a stranger.  As a gesture of good will, her stepfather Fredrick gives the crying young girl a special gift for Christmas--a birthday gift he had received from his friend, Caroline's biological father.  The gift was a men's watch fob with a chain.  Caroline still wears it every Christmas to remind her of her father and the wonderful stepfather she's was lucky to have in her life.

As others in the party go to bed and Charles begins stuffing the children's stockings for the morning, Almanzo too begins reminiscing.  The second story we see is Almanzo's memories about a Christmas he never wants to forget.  He shares a story about the year his big brother Royal revealed a stack of hidden presents in the barn and told young Almanzo that Santa Claus didn't exist.  Later, young Almanzo confesses to his father that Royal suggested that Santa wasn't coming because the gifts were already purchased.  But his father very gently explains about the magic of Santa, inspiring renewed spirit in the little one.  Sure enough, that Christmas Almanzo found that Santa did visit just as his father promised, however the naughty Royal didn't receive any gifts!

As the night wears on, the severe snow storm begins to worry several of the adults still gathered, sharing conversation around the dining table.  The barn door has blown off its hinges and a piece of wood crashes into the side of the Ingalls' home.  After making temporary repairs, Almanzo and Charles come back through the front door covered in snow from the outside storm.  This sight reminds Laura of a cherished Christmas memory from years before which she shares with the group.

Seeing Almanzo and Pa covered in snow reminds her of the family's first Christmas in Kansas--when Mr. Edwards came to visit.  After a long journey through stormy weather, Mr. Edwards arrived at the cabin with gifts for both Mary and Laura.  Edwards explained that as he was leaving Independence (Missouri), he met Santa Claus on the street.  The elderly, fat Santa was worried about making the trip to the Ingalls' home so he asked Edwards if he'd bring the girls' gifts on his behalf!  That Christmas, Mary and Laura each got their own tin drinking cup, a stick of peppermint candy, mittens, a cookie, and a penny.

As the blizzard rages outside, most of the adults still can't sleep.  Hester Sue offers to share her memories of a previous Christmas she'll never forget.  Hester Sue explains that one Christmas during the Civil War when she was about ten years old, she went to the store with her friend to talk to Santa Claus--but she wasn't allowed in the store because she was black.  Standing outside the store, Hester Sue spoke with two young, African-American boys who explain that Santa Claus was white and he didn't visit black children.  Hester Sue could see through the window that the store's Santa Claus was white but she didn't know if she should trust the boys.

That night, Hester Sue spoke to her parents about Santa Claus coming to visit and they reassured her about Santa.  Later that night, Hester Sue woke up from her bed and saw Santa Claus leaving an angel doll within the branches of the family's Christmas tree.  Not only did she see Santa leave her a gift--but she saw that Santa was a black man!  Hester Sue explains to her friends listening around the dining table that that Christmas was an important one to her--and only years later did she learn that it was her own father who "borrowed" his boss' Santa suit in order to surprise his own daughter.


The episode ends when everyone in the Ingall's house wakes up on Christmas morning to discover that the snow has accumulated over the top of the front door!  Charles grabs his snow shoes and climbs out the second-story loft window to walk on top of the snow drifts to reach the barn.  There he retrieves the family's hidden Christmas presents.  This year, the family observed another meaningful Christmas--because they were together.

I think this is an exceptional Christmas episode for several different reasons.  One reason is because of the four stories shared by Caroline, Almanzo, Laura, and Hester Sue.  Loyal readers of this blog know that I love it when Christmas programs are about sharing Christmas memories.  As I've stated before, reminiscing is as much a Christmas tradition as decorating the tree and singing carols--so I love it when our favorite TV characters also engage in remembering.  I've already written about a few of these, including Truman Capote's A Christmas Memory and A Child's Christmas in Wales.  Even the movie A Christmas Story features a voiced-over narrator reminiscing about his past.

Hester Sue expresses that THIS is another Christmas she'll never forget because she's with the people she loves.  I love that doubling--that four members of the group tell stories about four holidays they'll never forget, in turn inspiring another memorable Christmas!  That's good TV writing there.


A second reason I find this Christmas episode to be exceptional is that three of the four stories are original material--it's not a rehashing of clips from previous episodes.  Extra effort was made by the people who made this episode to shoot original material.  However, in the case of Laura's memory of Mr. Edwards--the story is derived from clips from Christmas scenes in the original 1974 pilot movie also titled Little House on the Prairie.  So when we see young Mary and young Laura--that's really Melissa Anderson and Melissa Gilbert in 1974--more than seven years earlier!  If they chose to recycle clips from previously shot material, I love that they chose to pull from the pilot movie.

If that's not awesome enough, you should know that the Christmas scenes from the 1974 movie (and this 1981 episode) are actually adapted from the chapter "Mr. Edwards Meets Santa Claus" from the book Little House on the Prairie, written by Laura Ingalls Wilder.  Fans of the original books know that quite a bit was changed when the TV series was created.  Yet--this Christmas story from the book was faithfully recreated in the pilot movie and then included in this Christmas memories episode.  I love that!

A third reason this episode is outstanding to me is Hester Sue's story.  Not only is the story emotional and full of the Christmas spirit but it touches on a crucial part of her character's identity.  She doesn't have to explain how difficult it must have been to have grown up with a sense of self-pride after having been born into slavery. (Her story includes the detail that she lived on a plantation during the Civil War.)  Even though she is told that Christmas is for white people, Hester Sue's parents try to convince her that Santa loves and cares for her and that Christmas is about inclusion. It's extraordinary TV that she's able to share her story about a painful Christmas in a new community that accepts her an an equal and values her contributions and friendship.

A fourth reason I think this Christmas episode is exceptional is because it includes a couple of notable guest stars.  I'm a TV junkie so I immediately recognize actor Tom Lester playing Almanzo's father in his story. This same segment also features child actor Jerry Supiran playing the young Almanzo.  His face may be recognizable to those that grew up watch Small Wonder--a TV sitcom that has grown to cult status in recent years.