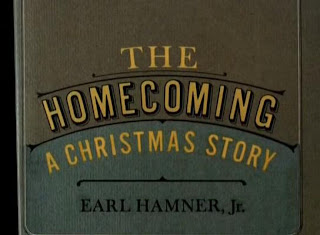 It is the 40th anniversary of the Christmas TV movie The Homecoming: A Christmas Story.  (Click here to see my review of this movie again).  This 1971 TV movie adapted from the book by Earl Hamner received such high ratings and praise that it inspired the TV series The Waltons.  The much beloved TV series ran on CBS for nine seasons followed by six more TV movies.  As you know, last Friday December 2, in Jersey City, NJ, The Homecoming was screened at the Legendary Loews Jersey Theatre followed immediately by a 13 member Waltons cast reunion and panel discussion.  As the Christmas TV expert, I was asked to be the panel discussion moderator.


Before the screening of The Homecoming, that night began with a reception/photo opportunity for the sponsors with the special guests.  The above group photo was taken at that event and I grabbed Marsha Mann (Radames Pera's wife) to join me to slip in line to get my picture taken with the Waltons cast.  Yes, Richard Thomas is not there--he would join the cast reunion panel discussion later in the evening.  (That night he was performing in the Off-Broadway play Standing On Ceremony and joined us after his show was over).  Actor Hal Williams who played Harley Foster on The Waltons is also missing from the photo but he would later join the panel discussion later that night.

After this reception, we were all seated in the theater and an introduction, written by Earl Hamner Jr., was read by his brother Paul Hamner.  Paul has the same Virginia accent as his brother Earl--the rich tones that we've all heard in each of the Waltons episodes when Earl voiced the narrator's commentary.  Also, Richard Duggan, the real-life son of actor Andrew Duggan who played the father John Walton in the TV movie, addressed the crowd and shared his appreciation for the event.

We also were treated to home movies from Kami Cotler's family who had recently found old Super 8 film they had taken from the location shoot in Jackson Hole, Wyoming during the production of The Homecoming in 1971.   Seeing the children playing in the snow and behind-the-scenes frolics was a rare treat.  After we watched a digital print of The Homecoming, the program included a tribute to actress Patricia Neal who played Olivia Walton in the movie.  There was a video montage and Radames Pera and Michael Learned who had both worked with Neal shared their special memories of her.

After an intermission, the cast were seated on couches with myself in the middle.  They reminisced about the filming of The Homecoming and then they recalled their memories about working on The Waltons.  Radames Pera and Ellen Geer who worked together in the first season episode "The Ceremony" shared those experiences and working with the Waltons cast.  Lynn Hamilton spoke about the very special episode "The Scholar" from the first season where her character Verdie is first introduced, and Hal Williams who played Harley Foster from the second season until the ninth season also shared his experiences.  David Huddleston spoke about being in both The Homecoming as Sheriff Ep Bridges and about the first season episode "The Literary Man" in which he plays A.J. Covington a writer who's life influences John-Boy.

It was when David Huddleston was sharing his personal memories that Richard Thomas arrived and walked on stage just as David mentioned the name John-Boy.  It was perfect timing for Richard to join the cast discussion and the crowd leapt to their feet in applause!

After the cast reunion discussion, Richard Thomas read the poem "The Night Before Christmas" by Clement Moore for the audience.  Then the evening's entertainment ended when all those on stage stood and sang Christmas carols led by musician Jon Walmsley, the musical brother Jason from the TV series.

This once-in-a-lifetime event was amazing.  I still feel giddy and exhausted from the week's events that lead up to the special event on Friday Dec. 2nd.  Seeing this TV movie on the big screen was thrilling and emotional.  When I was growing up, The Homecoming (1971) and The House Without A Christmas Tree (1972) were the two Christmas TV movies we most looked forward to watching.  It really feels exciting to know that so many others still love and appreciate this movie as much as I do.

Stick around for Part 2--for more highlights from The Waltons cast reunion event.

**Special thanks to John J. Buxbaum who took many of the photos from the event.  Obviously, I couldn't take photos during the event that I participated in.  See more of his photos HERE.

Email ThisBlogThis!Share to TwitterShare to FacebookShare to Pinterest
Labels: The Homecoming