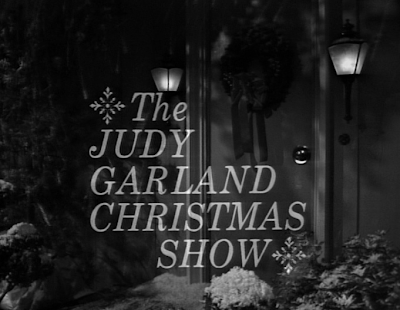 Music is inextricably intertwined with Christmas.  One thing I love to do at the holidays is watch TV variety specials--and the 1963 Christmas show of the short-lived The Judy Garland Show is one of my favorites.   If you haven't seen it recently, you should make the excuse to enjoy it again.  This Christmas episode has been released on DVD and is fairly easy to locate.  2013 marks the 50th anniversary of this particular Christmas episode giving me the perfect opportunity to share my thoughts on it.  The review below is an excerpt taken from my book The Christmas TV Companion in the chapter on outstanding Christmas TV variety moments.


"The show opens with the camera looking through the windows of a home, focusing on the maternal Miss Garland singing the melancholy "Have Yourself a Merry Little Christmas" while affectionately grasping [her young son and daughter] Joe and Lorna [Luft].  Of course, this is the memorable song that Judy made popular in the 1944 movie Meet Me in St. Louis.

Judy invites the TV cameras into her home for this Christmas TV special, to share the holiday with her family as her good friends, Jack Jones and Mel Tormé, informally drop by.  Both young Joe and Lorna adorably sing off-key songs, and a 17 year-old Liza Minnelli is here entertaining too--the best is her song and dance jazz number to "Steam Heat."

Garland and her children sing and dance ever so casually, as if improvising, yet the choreography and the off-stage orchestration suggests otherwise.  In fact, all the entertainment appears informal--as if a natural extension of the singer’s lifestyle, yet it’s so perfectly conceived and painstakingly arranged, it can’t be that natural.


Twice when a team of stylized Santa Clauses raucously bursts through Garland’s front door to dance in the middle of her living room, the audience is once again reminded of how phony this improvised moment truly must be.  Despite her professional demeanor, Judy really seems to be uncomfortable, at times appearing to be forcing the Christmas spirit.

Hollywood legend says that Garland’s short-lived variety show had been plagued with problems.  Some blame her drinking as well as backstage egos. Whether you’re aware of the rumors or not, problems are palpable on the production of her Christmas Show.  Garland herself is ill-at-ease during the taping.  She seems distracted and fidgety, not really focused during the entire show.


And later, tension can be felt when Garland sits at the piano to sing with Tormé, the song so synonymous with the holiday, that it’s often overlooked that Tormé himself co-wrote it--"The Christmas Song."  Harmonizing along side the Velvet Fog, Judy accidentally flubs a line and Tormé reacts jovially, laughing and making the aside comment, “Close....” But there is clearly some friction when Judy purposefully alters the next line to add a lyric from her signature tune "Over the Rainbow" on top of his masterpiece.  The first lyric change was a mistake but she’s clearly manipulated the lyrics vengefully the second time.

Although she shares the stage with her children, with everyone singing and enjoying each other’s company, at the end of the show when Judy sings "Over the Rainbow," you can feel the same uncomfortable feeling, much like the opening in "Have Yourself a Merry Little Christmas."


Judy has to belt out another of her signature songs, which undermines the small, intimate moment she’s sharing with her children.  However, even when Judy isn’t at her best, she’s still better than most.  This explains why her Christmas special remains a very popular vintage favorite."

This classic Judy Garland Christmas episode is far from forgotten as it was replicated in an homage for the 2011 Christmas episode "Extraordinary Merry Christmas" on the musical TV series Glee.  I covered that episode HERE.  What's your favorite Christmas TV variety show?


Joanna Wilson is a TV researcher and book author specializing in Christmas entertainment. More about the TV programs mentioned on this website can be found in her book "Tis the Season TV: the Encyclopedia of Christmas-themed Episodes, Specials, and Made-for-TV Movies." Her latest book "Triple Dog Dare: Watching--& Surviving--the 24-Hour Marathon of A Christmas Story" was released in 2016. She is currently updating and expanding the encyclopedia for a 2022 release. Her books can be found at the publisher's website: 1701 press.com