This post first appeared as a part of Dickensfest at Holiday Film Reviews.  Many thanks to JA Morris and RigbyMel for inviting me to participate in Dickensfest--a tribute to Dickens' most popular work A Christmas Carol in honor of the 170th anniversary of the book's release.  You may remember that JA Morris and RigbyMel have guest blogged for me here during my Christmas in July celebrations in 2011, 2012 and 2013. 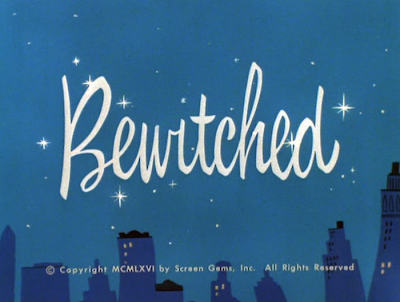 The fourth season episode "Humbug Not to Be Spoken Here" on Bewitched is the second of a total of four Christmas episodes made during the series' run.  This particular episode has some common story elements with the other Bewitched Christmas episodes, and I fear that its legacy has been overlooked.  Maybe I can convince you to take another look at this under-appreciated magical Christmas installment--that includes a much imitated Dickensian spin.


In 1967's "Humbug Not to Be Spoken Here," Darrin Stephens finds himself being asked to work late into the night on Christmas Eve--although he's already promised to help his wife Samantha decorate the Christmas tree.


A new client, the very business-minded Mr. Mortimer is insisting that the details of his advertising campaign can't wait until after the holidays.  When Darrin refuses to work any later, Mortimer follows him to the Stephens' home insisting Darrin continue working or he'll cancel his $500,000 account.

Sam feels badly for Mortimer and his lack of holiday spirit.  She's sure there's something she can do to reach him and she hatches a plan to inspire Mortimer's belief in Santa Claus.  While Darrin is sleeping in bed, Sam decides to use her magic to take Mortimer on a nighttime journey.


Sam flies into Mortimer's window and awakens him from his bed.  She confesses she's a witch and explains to the angry and confused man that she's taking him on a journey to the North Pole to introduce him to the real Santa Claus.


At the North Pole, Mortimer is confused and upset and demands to be taken home.  Santa Claus agrees to drop Mortimer off at home when he passes by on his annual trip around the world.  On this long journey with Santa, Mortimer recognizes the home of his butler Hawkins.


Looking through the front window of Hawkins' home, Sam and Mortimer notice how happy the put-upon butler behaves when he's with his own family.  Mortimer remarks that he's surprised about Hawkins' happiness given that his employee doesn't have much money.


On Christmas morning, Sam, Darrin, and Tabitha are celebrating Christmas together and opening their gifts when there's a knock on the front door.  It's Mr. Mortimer who explains that he experienced a horrible nightmare last night and has had a change of heart about cancelling his ad campaign.  Sam goes along with his nightmare theory--pretending she doesn't know about his experiences last night.

Mr. Mortimer would like to continue working with Darrin after the holidays are over.  He'll have to wait until his butler returns anyway--he sent Hawkins and his family away on an all-expenses paid vacation.  The implication is that Mortimer now appreciates that money can't buy happiness and he regrets punishing Darrin for putting his family first before business.  When Mortimer sees Tabitha under the Christmas tree playing with a one-of-a-kind doll he saw at the North Pole, he's no longer sure what he experienced last night was a nightmare after all.


What stands out to me in this holiday episode--despite the distracting Santa Claus and North Pole elements--is that this story is structured like an adaptation of Charles Dickens' A Christmas Carol.  Mortimer is focused on the importance of money, he has a lack of holiday spirit, he demands Darrin work on Christmas, and on Christmas Eve while in bed Mortimer is visited by a guide calling herself "The Spirit of Christmas."   For many of us, Santa Claus represents our belief in Christmases past.  Mortimer also visits a Christmas in the present--when he witnesses Hawkins' joy with his family.  And, Mortimer feels transformed by his night time journey, deciding to give gifts to those he's wronged and righting the future for his ad campaign.  The episode's story is a little muddy, but I believe Dickens' original elements are all clearly here.


What makes this episode different from typical adaptations of Dickens' A Christmas Carol is that Samantha stands in for the three spirits of Christmases past, present, and future.  Even more precisely, she takes it upon herself to teach Mr. Mortimer a lesson about the holiday spirit by gaslighting him into thinking he's experiencing a supernatural journey during the night of Christmas Eve.  Well, Mortimer is taking a supernatural journey--by way of her witchy magic.  However, instead of a ghostly Jacob Marley character who wants to warn Scrooge about his upcoming painful fate in the afterlife--Sam decides she knows better for Mr. Mortimer and takes it upon herself to teach him a lesson about life.  It's actually kind of arrogant of Sam--but we'll forgive our favorite TV witch, this once!  I think the TV writers found an interesting and clever way to incorporate the much-beloved storyline of A Christmas Carol into this series without turning Sam (or any of the other regular characters) into the vilified Scrooge character.


I point out this interesting A Christmas Carol story development because I've seen it many times.  As someone who writes about Christmas entertainment, I've seen quite a few television versions of A Christmas Carol where the series' hero takes it upon him/or herself to gaslight an adversary into learning a lesson, usually inspiring the Christmas spirit.  Do you remember any stories like this?  How about the Six Million Dollar Man's 1976 episode "A Bionic Christmas Carol?"  It's also an element within The Dukes of Hazzard's 1980 episode "The Great Santa Claus Chase."  And, it has been done on the 1984 Christmas episode of Highway to Heaven, the 1996 holiday episode of Xena: Warrior Princess, and the 2009 Christmas episode of It's Always Sunny in Philadelphia, among others.  There are more episodes to add to this list--can you name one?


I chose to share this particular episode of Bewitched and discuss this unique television spin on Dickens' original tale because I believe this 1967 episode is the first of its kind.  Do you know of an earlier example than this 1967 episode of someone being gaslit into receiving the Dickens treatment?  Let's discuss it.