Merry Christmas in July!  This whole month we're celebrating our favorite science fiction-themed Christmas entertainments.  I've updated a post that originally appeared on Christmas TV History in May 2010.  I'm re-posting it WITH PHOTOS and added commentary!  I hope you like the improvement.  Happy SCI-FI Christmas in July! (I love that it rhymes!  Who's with me?) 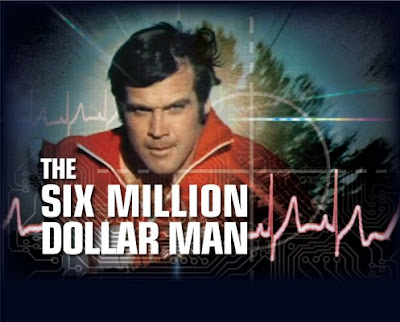 "A Bionic Christmas Carol" is a fourth season episode on the sci-fi/adventure series, The Six Million Dollar Man.  Col. Steve Austin is asked to cut his Christmas vacation in order to check on a company developing a life support system for a landing on Mars that is plagued with problems. Austin meets the company’s owner Mr. Budge (played by Ray Walston) and learns that the equipment testing problems are not sabotage but a greedy company owner who is going by the lowest equipment specification recommendations--the equipment fails because it’s too cheap.


Steve also meets Bob Crandall (played by Dick Sargent), Budge’s nephew and chauffeur that Budge had demoted from his accountant when Crandall desperately stole company money to pay his wife’s medical bills. Steve spends the holiday with Crandall’s impoverished family--even getting them a Christmas tree and promising gifts from Santa Claus that they weren’t expecting.


Conveniently, Mr. Budge over-medicates himself on Christmas Eve, going in and out of consciousness with hallucinations. Under doctor’s orders, Steve Austin is instructed to keep Mr. Budge from falling asleep until the medication wears off--so Steve gives Budge the Dickens’ treatment! Disguised in a Santa Claus suit and without speaking a word, Steve spends Christmas Eve showing the groggy Budge the consequences of his greedy actions.


This adaptation of Dickens’ A Christmas Carol may play fast and loose with the spirit of Christmas but it is fun none the less. Two of Crandall’s young children are played by child actors Adam Rich (Eight is Enough) and Quinn Cummings (Family). Who doesn't love seeing actor Ray Walston--that's Mr. Hand (Fast Times at Ridgement High) to some, and Uncle Martin (My Favorite Martian) to others--getting scared straight at Christmas?  And, actor Dick Sargent (Darren #2 on Bewitched) plays the down-trodden Bob Cratchit role of Bob Crandall.


One of my favorite scenes is when Steve Austin jumps to the top of a fir tree in the Crandall’s back yard in order to rip the top off for the family’s Christmas tree.


Another favorite scene: Steve uses his bionic hand to chisel a tombstone to help scare Budge into reconsidering his life!

If you need more Lee Majors in your Christmas diet, don't hesitate to watch him in 1965's The Big Valley Christmas episode "Judgment in Heaven," The Fall Guy's holiday episodes, 1984's "The Winner" and 1985's "Escape Claus," and in the 1986 TV movie A Smoky Mountain Christmas with Dolly Parton.

Since I first posted this piece, the series has been released on DVD.  If you watch it, you may want to look for a few details you may only spot with access to a pause button on your DVD player.


Does Budge's home look familiar?  It should--it's the facade of the building used for Norman Bates' home in the Alfred Hitchcock movie Psycho.


The facade had been altered many times since the original 1960's Psycho but here, in this Six Million Dollar Man episode, it still looks like the changes made for the 1976 TV miniseries Captains and the Kings.

And, in another scene, Steve Austin is shopping in a toy store.  Can you see what's hiding-in-plain-sight on the shelf behind the cash register?

It's the action figure of The Six Million Dollar Man!  Did you have this toy in the 1970s?