Here it is the 31st, the last day of our SCI-FI Christmas in July celebration.  I have one more science fiction Christmas episode to share.  This past holiday season bought a very interesting animated installment of the TV series Eureka, an original program on the Syfy Channel. 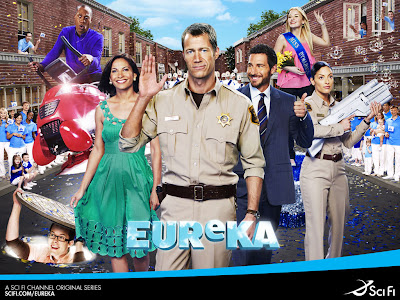 In the fourth season episode, "Do You See What I See?" Sheriff Carter wants to surprise the town residents with a fresh blanket of snow on Christmas morning.  He arranges Fargo to create a holographic snow making machine.  But when the Super Photon Generator just outside of Eureka goes into overdrive, everyone finds themselves animated characters in a Christmas story.


Carter blames himself for the technological breakdown and sets off into the surrounding mountainside to fix the photon generator with Andy, Allison and Jo.  But their efforts are hindered as they keep changing animation styles--from CGI to Saturday morning cartoon, traditional animation to claymation to Japanese anime!  The characters encounter this strange cartoon world filled with obnoxious sound effects, where cars and dogs can talk and the usual rules of physics don’t apply.  When the Eureka characters become animated, Dr. Taggert becomes a polar bear that speaks with an Australian accent, Jo resembles Disney’s Snow White/Cinderella, Andy is a robot with cartoonish accessories, Henry Deacon becomes a toy with a pull string, and Fargo becomes a bobblehead doll.


What Carter doesn’t know is that this animated world isn’t his doing--it is young Jenna’s new Christmas present interacting with the Super Phonon Generator.  The child has opened her new toy, Holotown, an interactive electronic game book where you create your own story as you go.  Not only has the toy made all of Eureka animated but the monster she creates, a ninja snowman is devastating the community!


As Carter and Jo fight the snow ninja, Allison, Andy and Dr. Drummer (did you see the previous year’s Christmas episode?) repair the Super Photon Generator to get it to stop interacting with the interactive Holotown.

This isn’t the first time a TV show turned its cast into animated characters for Christmas.  But it is one of the most exciting!  The many different animation styles are very thrilling--there’s even a brief scene where our main characters (Carter, Andy and Jo) flash from non-descript traditional cel animated-looking characters to characters that look like A Charlie Brown Christmas, The Simpsons/Futurama, South Park and even Scooby Doo characters.


Other live action TV shows have turned their characters into animated ones for the holiday show.  I remember: Home Improvement's 1996 episode "The Wood, the Bad and the Hungry," That 70s Show's 2001 episode "An Eric Forman Christmas," George Lopez' 2005 episode "George is Being Elfish and Chris-Misses His Family," and of course, Community's 2010 episode "Abed's Uncontrollable Christmas."  Do you remember any others?