Do you watch and enjoy the original programming on the Syfy Channel?  Warehouse 13 is an interesting series.  It combines charming characters in a provocative location--these are the employees of an Area 51-type governmental storage facility.  They are responsible for guarding over alien and supernatural artifacts that the government secretly possesses.  This drama with light comedic moments has produced two Christmas episodes so far.  Last year's was my favorite.  This episode is currently streaming on Hulu.  Merry SCI-FI Christmas in July! 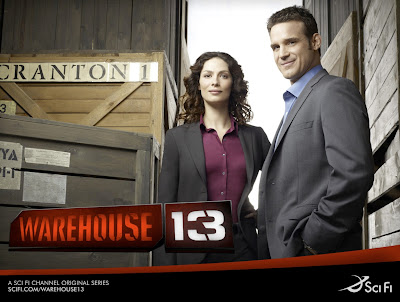 
Pete accidentally touches an artifact while in the Aisle of Noel in the Warehouse.  Unfortunately, he discovers he now occupies a time and place as if Pete Lattimer never existed.  What was that artifact he touched?

Unfortunately, he has touched an upholstery brush owned by Philip Van Doren Stern--the author of the short story “The Greatest Gift” which inspired the movie It’s A Wonderful Life.  Indeed, Pete has found himself in a new reality as if he was never born!

Now Pete has to go to Washington DC to convince Myka, who’s never heard of him, to let Artie out of prison and help him break into Warehouse 13.  They have to make things right because in this world the agent-turned-killer James MacPherson isn’t dead--he’s booby trapped the warehouse to use the artifacts for his own purposes.

Can Pete convince Myka, Artie, Claudia and Leena to trust him even though he’s a stranger?  This is a very clever way to adapt the familiar story of It’s A Wonderful Life in a whole new way.  Of all the adaptations of It's A Wonderful Life attempted within TV episodes, this is a bold one that succeeds.  It's both original yet faithful to the spirit of the movie (and short story).  This episode also makes another great installment of Warehouse 13.


Have you read Philip Van Doren Stern's book "The Greatest Gift" before?  The book really does include an upholstery brush as an important artifact within its story.  I wrote about this book just last month--click HERE to link back to that review.
Posted by Joanna at 11:11 AM