Christmas TV History would like to welcome another guest blogger, Bob Ignizio from Cleveland Movie Blog.  Bob also wrote last year's 1990s Christmas in July post about Boogie Nights.  This year he shares with us his thoughts on another theatrical release movie.  Thanks Bob! Merry SCI-FI Christmas in July. 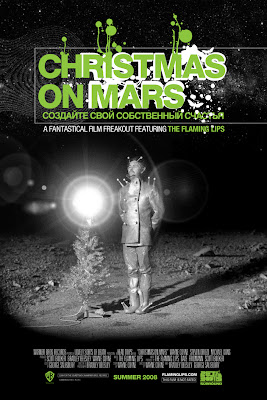 Christmas on Mars
by Bob Ignizio

For those who like to ring in the holidays by consuming something a little more mindbending than eggnog, CHRISTMAS ON MARS is for you. Although much of the film consists of extended psychedelic sequences and shorter bizarre and disturbing visions, there is a plot and it's not that hard to follow. Major Syrtis (Flaming Lips multi-instrumentalist Stephen Drozd) is trying to put on a Christmas pageant for the residents of a rundown Martian space colony. The event is to celebrate the arrival of the first human child due to be born there at midnight on Christmas, but a major monkey-wrench gets thrown into Syrtis' plans when his Santa commits suicide. With no one on the crew willing to take over, the role is given to a strange green skinned visitor (Lips frontman Wayne Coyne) who mysteriously appears outside the station.


Most of the cast consists of the Lips and their friends, who are not professional actors (SNL's Fred Armisen being a notable exception). That said, while there is some expected unevenness to the performances, for the most part everyone acquits themselves well. The effects and sets, while by no means flashy or high tech, are surprisingly convincing. The space station looks very much lived in, and there are a few practical effects scenes that are none the less disturbing for having been done on the cheap.


Watched stone cold sober as was my experience, CHRISTMAS ON MARS is a reasonably entertaining bit of sci-fi weirdness. Most of the film is in black and white, with occasional instances of color used for jarring effect. The instrumental soundtrack by The Flaming Lips further enhances the acid-head atmosphere. The overall vibe is very much in the vein of sixties underground films, a stylistic blend of Kuchar Brothers campiness and Kenneth Anger's dead serious metaphysics in the service of a 'B' science fiction plot. It's a mix that helps keep the film's core theme of a new messiah born of science rather than religion from veering too far towards either pretension or silliness.


No doubt plenty will still find it to be self indulgent weirdness for its own sake, and some may even consider it blasphemous. Both are perfectly reasonable reactions. Hopefully there's enough information in the preceding paragraphs for readers to make an educated guess as to which camp they're likely to fall into, and proceed with caution from there. Personally, although I'm not planning on making CHRISTMAS ON MARS a new holiday tradition just yet, I did enjoy it. Fans of the Lips and/or hallucinogenic substances will likely enjoy it even more. 3 out of 4 stars.
Posted by Joanna at 10:34 AM