Today's guest blogger is Bob Ignizio, the editor of The Cleveland Movie Blog.  The writers at The Cleveland Movie Blog include reviews and information about the latest major studio and independent film releases.  Please check them out.  Bob wanted to write about one of his favorite Christmas scenes in a movie, one found within 1997's Boogie Nights. Thanks to Bob for this great post and his wicked Christmas spirit :) 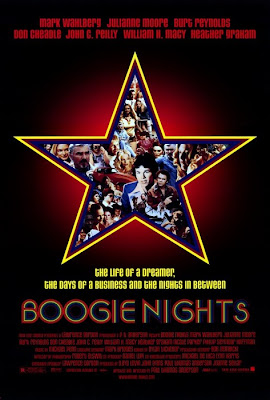 BUCK SWOPE'S CHRISTMAS MIRACLE
'BOOGIE NIGHTS' AND THE HOLIDAY SEASON
By Bob Ignizio
One of the great strengths of Paul Thomas Anderson's BOOGIE NIGHTS (1997) is the way it creates characters you genuinely like and care about despite their lack of judgment, lapses of morality, and involvement in pornography, a profession that many view as sordid and disgusting. After a sex and drug fueled romp through the seventies, things start to go downhill for just about everyone in the film in the eighties. BOOGIE NIGHTS reaches what is probably its lowest point in a scene that  takes place on December 11th, 1983. The heady days of  seventies “porno chic” seem an eternity ago.  Christmas decorations and festive doughnuts act as ironic counterpoints to the depression and horror these characters lives have descended into.

At the same time, Jack's one-time biggest star Dirk Diggler (Mark Wahlberg) is so strung out on drugs that he's no longer up to the task of performing in adult movies. To support his habit, Dirk has turned to prostitution. Christmas lights and decorations adorn the bank where Dirk meets a potential John in the parking lot. Dirk gets into the man's pick-up truck and begins touching himself at the driver's request, but it soon becomes apparent that Dirk can't get an erection. Not that it would matter, since the man is really only interested in engaging in a little gay bashing with his friends.

So far plenty of impotence and beatings, which I hope doesn't describe your typical holiday season. And it's going to get worse before it gets better. Buck Swope (Don Cheadle), easily the most decent and likeable actor in Jack's stable of studs, drives past the parking lot where, unbeknownst to him, Dirk is taking a beating. He has other things on his mind. His girlfriend Jesse St. Vincent (Melora Walters) is pregnant with their child. Buck wants to provide for his family by opening a stereo store, a legitimate business he's actually cut out for. Unfortunately, the bank won't give him a loan because of his X-rated past. But more pressingly, Jesse is in serious need of a doughnut fix.

Buck stops at an all but empty doughnut store. There are Santa Claus decorations on the walls, and Buck takes an almost childlike joy in the special holiday doughnuts in the display case. But his happiness soon turns to terror as an armed robber comes in and demands the store's cash. The clerk does his best to comply with the robber's demands, putting the money from both the register and the safe into a paper bag. He's not fast enough, though. The shop's only other customer, a bearded man reading a hunting magazine while sitting in a booth, pulls out a gun and shoots the robber. This leads to a chain reaction as the robber shoots the customer with his last breath. The customer in turn accidentally discharges his firearm as he falls over in death himself, hitting the clerk in the head.

Dressed head to toe in white that is now covered in great splotches of red, Buck looks like a gore soaked Santa. He's in shock, but unhurt. As he begins to come out of his shock, Buck realizes that the bag of money is sitting on the floor. Until now, as I've said, Buck has been the one consistently decent, moral (Yes, moral. So what if he has sex on film?) character in the movie. We know this isn't an easy choice for him, but his future and that of his family is at stake. He takes the money and high tails it out of there, much to the shock and puzzlement of Jesse. And because we've come to like Buck so much, we find it difficult to judge him for this act. Better to think of it as some kind of twisted Christmas miracle bestowed upon Buck by a God or universe that may not be uncaring, but certainly has a twisted sense of humor.


The scene from Boogie Nights
Posted by Joanna at 1:36 PM