Yesterday's excessive heat (it was 97 degrees around here but it felt even worse) zapped my strength to post.  But I'm back at it today as we continue the Christmas in July party.  Oddly, no guests this month have chosen to write about one of THE most obvious holiday favorites from the 1990s--Seinfeld.  But I can't let the month pass without some comment on it so I'll pick up the task. 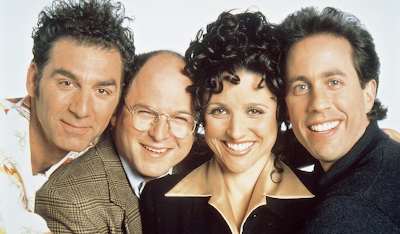 Seinfeld offers several holiday-inspired episodes including the one where Kramer helps Elaine snap a photo for her Christmas card; the one where Kramer works as a store Santa Claus spreading communist propaganda; and the one where George buys a discounted sweater with a visible flaw as his Christmas present for Elaine.  Check the encyclopedia, Tis the Season TV, for the complete listing of all the holiday Seinfeld episodes.  But my favorite has to be 1997's 'The Strike.'

This is THE Festivus episode.  The gang go to Tim Whatley’s Hanukkah party where Jerry meets his latest girlfriend whom he nicknames “Two-Face;” Elaine gives Denim Vest a fake phone number on the back of her Atomic Sub card--one more purchase and she gets a free sub.  George tries to scam his co-workers by appearing generous when he claims he’s donated money in their names to a fictitious charity “The Human Fund.” And, Kramer’s twelve year strike against the Bagel shop is over but they won’t give him time off for Festivus, the holiday George’s father Frank Costanza invented in rejection of the commercialism of Christmas.  Though George is humiliated by the customs from his youth, we learn that Festivus involves “feats of strength” and “the airing of grievances” around an aluminum pole instead of a Christmas tree.  Are any elements of Festivus a part of your annual celebration? 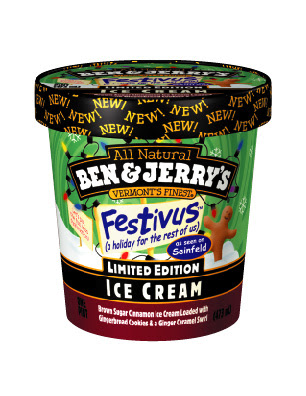 “A Festivus for the rest of us!”  A testament to the popularity of this new holiday is that ice cream company Ben and Jerry’s came out with a limited-time only, seasonal ice cream flavor called “Festivus.”  It was brown sugar cinnamon ice cream with gingerbread cookie chunks and ginger caramel swirl.  I bought and consumed more than my fair share of it back then!  Ben and Jerry's later changed the name of the flavor to 'Gingerbread Cookie’ but have since retired the flavor.  It seems like the popularity of Festivus has only grown over the years--will Ben and Jerry's ever bring back my favorite flavor?


The Festivus references edited into one video segment
The complete episode is available for viewing on DVD (disc 2 of the 9th season).
Posted by Joanna at 6:55 PM

Email ThisBlogThis!Share to TwitterShare to FacebookShare to Pinterest
Labels: Seinfeld