1990s Christmas: Jingle All the Way 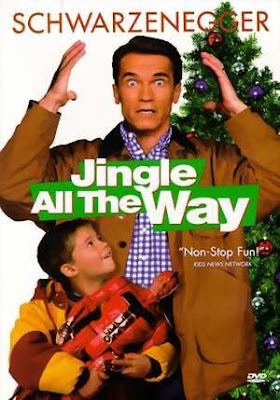 What does Arnold Schwarzenegger share in common with Star Wars?  This crazy Christmas movie, that's what!  The actor who plays the son, Jamie Langston, is Jake Lloyd who also went on to star in Star Wars: the Phantom Menace as the young Anakin Skywalker.  I know, right?


Since I was already an adult when this 1996 theatrical release family movie came out, my enjoyment of Jingle All the Way relies on seeing the familiar cast members in outrageous roles. The ensemble cast includes the brilliant Phil Hartman as the amorous neighbor Ted;  Jim Belushi as the con man/Santa Claus; Danny Woodburn as Tony the elf; and, Robert Conrad as Officer Hummell.  Sinbad plays Langston's rival Myron and of course, Arnold Schwarzenegger plays Howard Langston, Rita Wilson is his wife Liz, and Jake Lloyd is Jamie.  In smaller roles, you can also spot Laraine Newman, Martin Mull, Curtis Armstrong, Chris Parnell, Mo Collins, Richard Moll and Harvey Korman.  There are comedians and funny people crowded into very corner of this film!


In case you haven't seen it before:  Arnold Schwarzenegger plays Howard Langston, a father known for his broken promises to his son Jamie.  This year for Christmas, Jamie wants the hottest toy of the season, a Turbo Man action figure, and Howard really needs to make good on his promise.  Putting it off until Christmas Eve, Howard begins his day long odyssey to acquire the toy.  His long quest involves searching the empty shelves of a local toy store as well as a trip to the Mall of America, negotiating with a con man disguised as Santa Claus and avoiding rabid reindeer. Howard also has to outrun another desperate father, a mailman named Myron looking for the same elusive toy.  Empty handed, Howard looks to join his family downtown only to find a new opportunity: to play Turbo Man on a Christmas parade float and choose one child to receive a special limited edition of the coveted action figure.
This film's plot took advantage of the cultural phenomenon of one special toy becoming the hottest, most desirable Christmas gift for children each year.  The first time I remember this occuring was in the 1980s when Cabbage Patch Dolls became THE must-have doll.  Parents were spotted fighting in stores and some were even willing to pay hundreds of dollars just to acquire the sold-out, elusive toy. Since then, we've seen the Tickle-Me Elmo reach similar heights of demand as well as electronic game systems and games.  This phenomenon has become so common it has worked its way into plotlines for movies such as Jingle All the Way as well as many TV episode plots.  Which ones do you remember?  (I love the episode 'Marge Be Not Proud' of the The Simpsons--where the hot toy is the videogame Bonestorm.  It is so desirable that Bart shoplifts it from the store and gets caught!) Do you remember another movie, special or episode that centers around acquiring THE most desirable toy of the Christmas season?


The 1996 movie Jingle All the Way airs tomorrow Sunday, July 10th at 3:25 pm (EST) on HBO Family channel and repeats several times throughout the rest of the month of July.
Posted by Joanna at 1:29 PM