1990s Christmas: Tales from the Crypt

When Roza Haidet first suggested she would like to write about this episode from Tales from the Crypt for the 1990s Christmas in July party, I hesitated.  Then, I figured December 1989 is only one month from the 1990s AND it is such a great episode--why not?  I'm glad I gave her the go-ahead because she wrote a fantastic piece.  Roza has several things in which she's involved including filmmaking, available at www.CompoundPictures.com and her Etsy store (Rusty Chain) with her beautiful jewelry.  This episode of Tales from the Crypt is available for viewing on DVD and Netflix as well as my Youtube channel, TistheSeasonTV, on the 1980s playlist.  Thanks again to Roza for today's post. 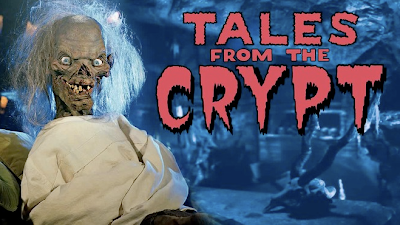 A Creepy Crypt-y Christmas
by Roza Haidet
As a child, I always had to watch Tales from the Crypt at my grandparent’s house even though it would give me nightmares.  They had cable!  What was I supposed to do?  There was something intriguing about the formula of the stories and, of course, the pun-spewing Crypt Keeper, which my cousin insisted was a real thing.  (Mind you, my cousin was kind of a pathological liar.  He also told me hover boards were real... you can imagine my disappointment.)  Nevertheless, I have fond memories in footie pajamas with my brother and my cousin on our grandmother’s floor watching the screen wide-eyed in the dark, nibbling on cheese curls and sipping sugary soda.  Where does the Christmas theme come in, you ask?  Coincidentally, it just so happens that one of the best episodes of Tales from the Crypt is also the only Christmas episode.  ‘And All Through the House’ is not only brimming with Christmas cheer, but also Christmas terror.  There is always a horrific aspect to something so joyful as Christmas that we feel deep inside our hearts.  There is a yin to every yang, and I tend to enjoy a little salty with my sweets; some cheese curls with my soda, if you will.  I don’t want to spoil the whole thing, so a brief synopsis will have to do.


The episode begins with the Crypt Keeper in a fleshy Santa Claus mask, covering his horrible face with a equally terrifying replacement.  (Speaking of...have you ever noticed that actress Grace Zabriskie looks a lot like the Crypt Keeper?  It’s terribly uncanny, but that’s beside the point.)  Anyways, the story opens with a husband and wife sitting by the fireplace with Christmas music playing in the background.  The wife picks up the fire poker and the husband says, “Let me have it.”  The wife replies,“Merry Christmas you son of a bitch,” as she plunges the poker deep into his skull.  She happily wraps his head in a cellophane bag with a red bow and drags his body outside to throw it in the well.


Meanwhile, her daughter attempts to sleep upstairs while impatiently waiting for Santa’s visit.  As the murder cover up continues, the radio comes on warning residents about an axe-wielding psycho killer who is on the loose dressed as Santa Claus.  I think you see where it’s going from here, right?  Well, of course the killer shows up at the house and the recent widow realizes that she can’t call the police because her belated husband’s bloody body is laying in the snow covered front yard.  The creepy Santa psycho killer attempts to break into the house and the little girl thinks he’s the real Santa Claus trying to get into the house to give her presents.  She innocently lets him in the front door and... I think your imagination can take you from there.


Obviously there is a lot of violence, blood, jump scares, witty interjections and puns sprinkled throughout this episode as there is in every episode of Tales from the Crypt.  Embracing the cheesy goriness is part of it’s appeal and like any good story, there is always a moral lesson to be learned at the end.

Shows like this are apart of the grind-house, b-rated silliness/gruesomeness that I have grown to love and I’m sure many of you do, too.  It’s the ultimate escape from everyday dullness and mediocrity.  I guess I have to thank my grandparents for having cable television and the Crypt Keeper for giving a little girl something to be scared about in the 90’s.  They are the reason why I like a little Halloween mixed in with my Christmas.  But remember what the Crypt Keeper says....
“Be careful what you ‘axe’ for for Christmas.  You might just get it.”

Email ThisBlogThis!Share to TwitterShare to FacebookShare to Pinterest
Labels: Tales from the Crypt