Today's guest blogger is Wings.  He has his own awesome pop culture blog, Caffeinated Joe.  Please check it out and give him your support.  This sixth season X-Files episode is currently streaming on Netflix.  Thanks again to him and all my guest bloggers during our Christmas in July party! 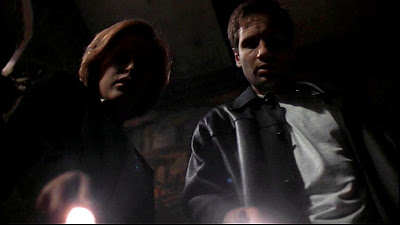 To begin, a recap:
Late on Christmas Eve, Mulder is waiting outside a spooky, old house for Scully. His reason? He believes the house is haunted by a couple who died there years ago in a lovers' pact. Scully is reluctant to enter and investigate, wanting to get home and wrap gifts in preparation for her family's Christmas morning. Mulder heads off alone and, after misplacing her car keys, Scully follows. Inside, they find the house as creepy as one would expect a haunted house to be. Soon, they find a pair of bodies hidden under the floorboards, corpses that bear a striking resemblance to themselves. After becoming trapped and then separated in an endlessly repeating room, each of the agents encounters one of the long-departed lovers, who appear as helpless yet wise senior citizens. These enigmatic homeowners seem to know more about Scully and Mulder's relationship than they should, and use this knowledge to play with the agents, preying on their loneliness and their dependence on each other. The problem for our heroes is whether they can see through these tricks and traps and make it through to Christmas Day alive.

Sounds like quite an episode, right? And, oh boy, it is. Not only does this make for a great holiday episode of The X-Files, but it would play just as well for Halloween, or even just for a run-of-the-mill dark and stormy night. So much goes right in this episode that it is just a gift for fans of the show and the characters. 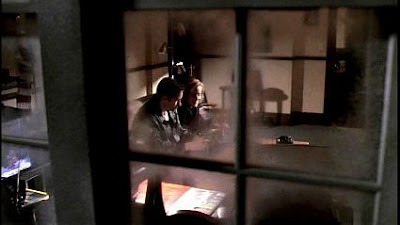 The premise of a house haunted by a pair of star-crossed lovers fits in great with the eerie theme of this show, and I am glad they focused on it for an episode. Truly, what horror/scary movie fan doesn't love a good haunted house or ghost story? And it is done so well here. The house is gothic and creepy, cobwebs and dark hallways everywhere. The thunder and lightning help add just the right feeling of unease and mystery. Just perfect. 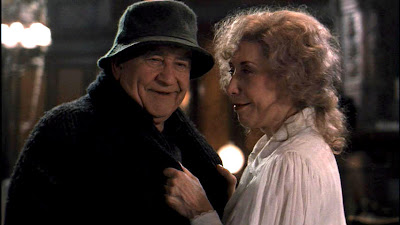 And the ghosts are in turns strange, unsettling and mischievous. As played by the great Ed Asner and Lily Tomlin, Maurice and Lydia seem playful and harmless. But when you understand their true goal - to claim another couple in despair, madness and murder - you know there is a level of menace behind their tricks and smiles. Subtle, but creepy nonetheless.

The relationship between Mulder and Scully is looked at here, as well, through not only their own actions, but in the dialogue between the ghosts and the agents. Maurice and Lydia want to hit them where it hurts, using their lonely lives and their often thankless jobs to try and evoke feelings of despair and hopelessness for the pair.

Sounds like a downer, I know, but the episode is played as much for fun as it is for introspection. Mulder wants to spend his Christmas Eve doing what he loves to do, investigate a mystery. And Scully is there with him, reluctant at first, but ready with her rational explanation for (almost) everything.

The final scene of the episode caps it all off perfectly, with the agents spending a very early Christmas morning together, gifts and all, as the snow falls outside Mulder's apartment window. Merry Christmas to us fans, indeed.

Email ThisBlogThis!Share to TwitterShare to FacebookShare to Pinterest
Labels: X-Files