Christmas TV History would like to welcome guest blogger Dominic.  He's my editor at 1701 Press.  For last year's 1990s Christmas in July, he wrote about the Christmas episode of The Adventures of Pete & Pete and the movie The Nightmare Before Christmas.  Remember those?  Thanks to Dominic for contributing.  Merry Sci-fi Christmas in July!
BraveStarr: "Tex’s Terrible Night"
by Dominic Caruso 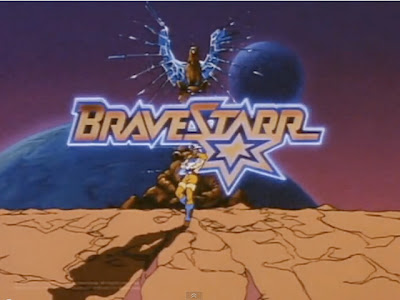 I grew up in the 1980s and caught many of the decade’s cartoons. So, I remember watching Transformers, G.I. Joe, Thundarr the Barbarian, and He-Man and the Masters of the Universe, plus other stuff with comparatively fewer explosions like Heathcliff, and the Smurfs. BraveStarr somehow got by me, possibly because it was broadcast during a brief window in 1987 and 1988—or so says Wikipedia. By then, I was in 10th grade, and had moved on (mostly) from cartoons to reading Faulkner. No, really. I really did read Faulkner in high school. Unfortunately, that was the coolest thing on my high school resume. But had I seen BraveStarr, I’m sure I would have liked it, because it’s richer than the other sci fi cartoons of the time.

BraveStarr is a sci fi western. The amazingly insane opening sequence features a Bonanza-like map that burns into a pattern of electronic circuits. Instead of twirling six-shooters, characters twirl uzi-shaped lasers. Characters wear cowboy hats, boots, gloves, and chaps, and ride flying robots.  The action takes place on a planet called New Texas, where the inhabitants are engaged in mining a valuable mineral called Kerium. BraveStarr, the planet’s lawman, looks like a chiseled Native American outer space Texas Ranger. The Big Bad Guy is a weird magical robot/spirit named Stampede who appears as a giant, drooling disembodied longhorn steer head floating in a murky black cloud. Stampede’s main henchman is Tex Hex, who looks (and sounds) like a cowboy version of the Cryptkeeper. Tex Hex is the star of the Christmas episode of BraveStarr, entitled “Tex’s Terrible Night.”
As it happens, it’s Christmas on New Texas and BraveStarr has to go to Iron Mountain to investigate rumors of claim jumpin’. This is cause for anxiety for Judge J.B. McBride, the planet’s female judge and BraveStarr’s love interest. There’s a brilliant moment as BraveStarr is leaving when he embraces her, tenderly tilting her chin upward and leaning in to ki-… Do nothing. Apparently there’s no kissing on New Texas. Actually, the two do kiss in the BraveStarr movie, thereby saving the “A” material for the big screen. BraveStarr’s absence creates the opportunity for Tex Hex to take over Fort Kerium with Stampede’s backing, and support from the planet’s other baddies. However, before Tex gets started, he is visited by Shaman, a mystical Native American character with an electronic headdress, who materializes out of nowhere and is impervious to Tex’s laser blasts.
Shaman is there to whisk Tex off on a series of temporal visitations in the style of Dickens’ A Christmas Carol. There’s still opportunity for Tex to mellow out and not wreck Christmas. By giving Tex the Scrooge treatment, we learn his back story. Visiting his past with Shaman, we are shown that Tex wasn’t always totally evil—he was young once, and in love! Although he tries to act tough, Tex is more than a little moved by the visions of his past with his true love, the beautiful and talented Ursula. Despite her assurances that her love isn’t contingent on his financial success, Tex has Kerium fever and leaves Ursula convinced that he’ll return a rich man.
Shaman takes Tex on further journeys into his past, one of which shows Tex at his most evil: when he double-crosses his mining partner Angus McBride (Judge McBride’s dad), stealing their Kerium reserves and crashing the getaway spaceship. Enter Stampede, who, seeing Tex’s capacity for naughtiness, re-animates him, turning him into a Cryptkeeper-y mutant.
Confronting Tex with the realities of Christmas Present, Shaman informs him that Ursula is in fact still alive, married, and living on New Texas, and that Tex’s nefarious plan will likely bring harm to her. Shaman also shows Tex the Christmas Future outcome of his greed and general crankiness: a lonely headstone with Tex’s name on it. Faced with this knowledge, and a demonstrable soft spot in his heart for Ursula, Tex drops the Scrooge routine and sabotages the attack on New Texas, even though he knows that Stampede will punish him.

“Tex’s Terrible Night” is a fun retelling of A Christmas Carol—which wouldn’t seem likely spliced as it is into the context of a sci fi / western genre hybrid. However, it works both as a Christmas episode, and as a part of the BraveStarr narrative. Unlike many of the cartoons of the time, BraveStarr had a rich, detailed back story with many characters, so “Tex’s Terrible Night” provides an interesting and sort of touching story for Tex Hex and Shaman. Okay, Faulkner it ain’t, but could Faulkner give you a delirious whirlwind of sci fi, western, and A Christmas Carol in under 22 minutes?
Posted by Joanna at 9:19 AM