As our SCI-FI Christmas in July celebration continues, Christmas TV History would like to welcome guest blogger Jeff Fox.  Have you seen his website NameThatChristmasSpecial.com?  There's so much good stuff there--I could spend hours and hours looking through it!  How good are you at recognizing Christmas TV specials?  find out at his site.  Jeff shares with us an episode of the new Twilight Zone.  Though this story is more of a fantasy one, I think this is a fantastic addition to our celebration this month because this series certainly has quite a few science fiction fans.  Thanks again to Jeff and everyone else who is participating.  Merry Christmas in July! 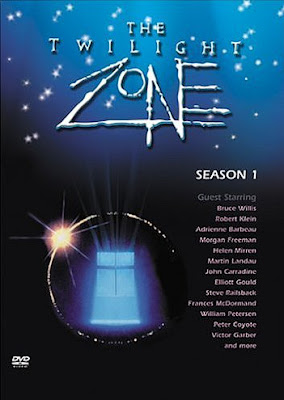 The Twilight Zone
Night of the Meek (1985)
by Jeff Fox 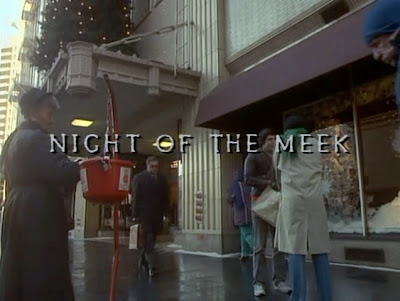 When Rockne S. O’Bannon began the first reboot of the Twilight Zone, way back in 1985, it just made sense to go with a few classic Rod Serling stories to keep the spirit and the flavour of the original series. One of the first of these stories remade was the 1960 Christmas classic ‘Night of the Meek’.

In this new version, Richard Mulligan (of Soap and Empty Nest fame) plays Henry Corwin, a down-on-his-luck Store Santa who carries with him sadness for all the less-fortunate kids who won’t be receiving gifts this year. After drinking away his dinner break, he returns to work only to be fired, but not before getting the chance to tell the store’s owner, Mr Dundee, how the kids in the store don’t really need a Santa Claus because they’re all going to get everything they want for Christmas anyway. 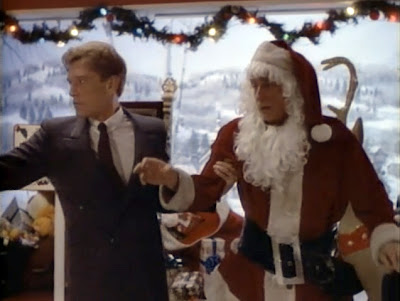 Corwin goes home to his apartment to continue drinking, but when all the bottles are done, he takes out the bag of empties only to discover that, after a special flyover from above, the bag is now full of toys! What’s more, when he reaches into the bag, he finds he can pull out any gift that people desire, so he immediately starts handing out gifts to everyone in his neighbourhood. 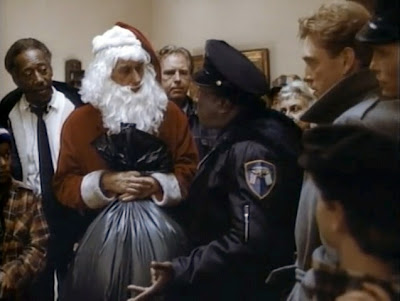 When Dundee finds out, he tries to have Corwin arrested, sure that all the gifts were stolen from his store. Luckily the bag can also produce receipts, letting Corwin off the hook. Later, Corwin finds Dundee and produces gifts that finally start to melt his Scrooge-like heart. Now everyone’s gotten what they wanted, including Corwin who reveals that this experience was the perfect gift for him, and the only thing that could make it better would be if he could do it every year. Soon enough he discovers that his beard is no longer a fake, and that he’s now able to fly up the chimney, ready to do it all over again! 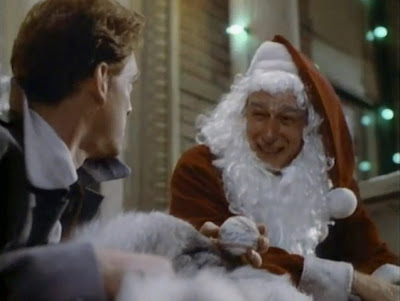 Even though it’s a remake, this retelling has several noticeable variations from the original. For one, Richard Mulligan makes a very different Corwin. While he doesn’t play a particularly convincing drunk (he’s a bit too goofy to match the darker edges of Art Carney’s original), this certainly shouldn’t be considered a bad performance. It’s actually one of my personal favourites. While Mulligan may not be as effective at the darker aspects, he positively shines when it comes to Corwin’s joy when he finally has the power to make a difference to the people around him. His excitement is infectious and lights up the screen; this is a man who has been transformed by a Christmas miracle, and this performance never fails to make me smile. 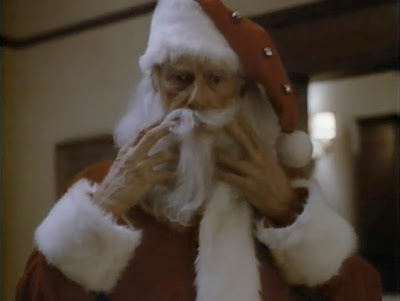 Though I’m sure there are those who probably consider it blasphemy to suggest that Rod Serling’s original script could be remade and possibly even improved upon, I found watching this updated version made Corwin’s external focus clearer, where Carney’s version seemed to be more about him internalizing the children’s suffering, almost making him one of the Meek needing saving, Mulligan’s version took greater efforts to show Corwin’s empathy to those suffering and how he wished he was able to help them. It always seemed to me to be a wonderful acknowledgment of, and a counterpoint to, the decade of greed that produced it. 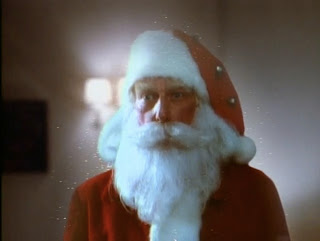 But both tellings are great versions, and both bring something different to a great story. If you haven’t yet seen this version, I highly recommend it. It may not be the classic that the original is, but it is a no less worthy a tale of finding the Christmas spirit and sharing it with others. It’s one of my ‘go-to’ Christmas specials whenever I need to be reminded of a little Christmas joy.
Posted by Joanna at 1:42 PM