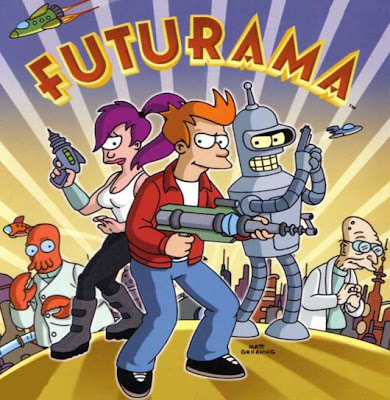 Most of us have already seen the first two holiday episodes of the animated TV series Futurama, right?  There is 1999's "Xmas Story" about the future's deadly vengeful Robot Santa, and the 2001 follow-up episode "A Tale of Two Santas."


Are you familiar with the latest yuletide episode "The Futurama Holiday Spectacular" from 2010?


In this sixth season episode, viewers are treated to a spoof of a musical Christmas TV special.  The story consists of three separate segments each containing its own holiday song explaining the traditions of the season.


In the first segment, the crew find themselves once again celebrating Xmas.  The deadly Robot Santa returns to suggest the space crew get themselves an old-fashioned pine tree for the holiday.  Though pine trees have been extinct for centuries, the crew fly to a seed vault and grow their own coniferous tree.

One year later, they are happy to decorate their first Christmas tree.  This segment turns into a hilarious horror story when it's revealed that their pine tree has been contaminated by germs resulting in coniferous trees spreading their seeds out of control, sprouting up all over, and re-foresting the planet.  When the Earth is literally covered in trees, the air becomes over-saturated with oxygen.  And, when Bender lights his cigar, he unwittingly ignites the atmosphere, returning Earth to its previously desolate condition again.


In the second segment, Bender is eager to celebrate his own version of a holiday he calls Robanukah.  (The others accurately accuse him of appropriating Robanukah from the popular Jewish tradition of Chanukah).  Bender insists his holiday celebrates the use of oil needed to keep fem-bots wrestling for 6 1/2 weeks--but he only has enough oil for 4 1/2 weeks.  Thus he insists the crew go drilling for rare petroleum oil.  Unfortunately, the crew become trapped when their ship implodes due to drilling at great depths within the Earth's core.  500 million years later, Bender discovers a Robanukah miracle has occurred!


And, the third holiday segment sees a return of the Kwanzaa-bot when the crew gathers at Hermes house to celebrate Kwanzaa.  When the Kwanzaa-bot insists Hermes use beeswax candles in his kinara, the crew once again go in search for the rare resource.  They journey in their ship to a beehive in space known to be populated with giant space bees however, once there, they discover the space bees are infected with parasites and harming each other.


Hermes takes it upon himself to inspire the space bees with the spirit of Kwanzaa to bring unity to the hive.  Unfortunately, the crew soon find themselves used as beeswax candles for the giant space bees’ kinara.


In this episode, viewers also see a return of the Head of Al Gore, an appropriate character considering these three holiday stories each have a potentially scary environmental message about shortages of our natural resources in the future.

Merry SCI-FI Christmas in July!
Posted by Joanna at 1:11 PM