To begin our SCI-FI Christmas in July celebration, Christmas TV History would like to welcome guest blogger Ronda Roxbury.  She's sharing one of her favorite sitcom alien Christmas episodes from the second season of Alf.  This episode is currently streaming on Hulu. 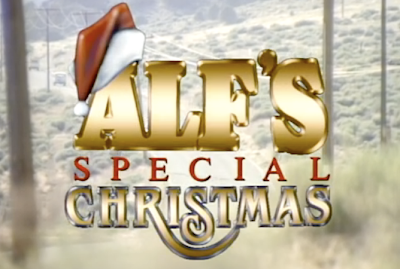 Christmas is not about getting something from others, but about giving of yourself. That seems to be the theme of Alf’s Special Christmas from 1987.

This charming episode starts out with the Tanner family driving to a remote cabin up in the mountains where electricity, running water and indoor plumbing are non existent. Of course Alf complains…AND manages to get himself stuck in the outhouse in normal Alf fashion. Alf has a way of finding mischief in everything he does.  Right from the start of the show, Alf has opened everyone's presents, blabbed about what the gifts or just switched the tags so that they say the gifts were from him. In his defense, when was he going to shop? He managed to bring some holly into the cabin only to have it be poison oak. Trying to do good but again causing mischief, Willie Tanner has told him to remove the poison oak and himself from the cabin.


That brings us to George Foley, the owner of the cabin whose wife Margaret passed away two weeks before Christmas. His world has ended as he's known it and he is trying to make others happy for one more holiday season. George Foley appears to be distant and unhappy and makes one wonder if he is thinking his end is near as well. Mr. Foley stopped by the cabin on his way to the children’s hospital to play Santa Claus and deliver toys. Alf, in his alien wisdom, decides to check out what is inside of the truck as its driven away.


At the hospital, Alf is loaded onto a “sleigh” with the other toys and one by one the sick children receive a toy from Santa. One of the last toys to be given away is Alf. He is given to a dying 8 year old girl named Tiffany. Through the night he talks to her and she tells him about how she is alone at the hospital and soon she will be going to a new world.


Alf explains he too is from a different world.  He did fine and found new friends and she will too. It is Tiffany that tells Alf that Christmas is not about getting gifts its about giving of yourself. Alf is a true gift to this frighten little girl.  He’s starting to get a grip on the meaning of Christmas.


When Tiffany falls asleep, Alf tries to find a way out of the hospital so he can try to find his way back to the cabin only to encounter a woman trapped in an elevator about to deliver her Christmas Eve baby--a girl--to which he asked her to name her baby Tiffany.  The new mom thanks Alf for giving of himself and helping her to deliver her baby.  Alf replies that she has given him the gift of gratitude and he is now understanding that Christmas is not about presents--it is about giving something of yourself to others no matter how big of small.

Once again Alf manages to find himself back on the “sleigh” and over hears the doctor telling George Foley that Tiffany is dying and won’t see another Christmas and that she told him this was the best Christmas Eve ever. Alf knows its because he listened to her and spent time with her. He also hears George gave his life savings to the hospital as if he is planning to die soon himself.


Tucked back into the truck Alf is listening to the radio that George is playing Christmas music on when it starts to heavily snow. George stops on a classic bridge over a river and in true “It’s a Wonderful Life” moment, George decides to jump.  Alf appears in a Santa suit and tries to talk to George into coming off the bride. Alf’s argument to George is that he has more people to make happy and that he can’t do that if he jumps. Alf tells him that a very young girl told Alf it's not about getting something--it's about giving and George still has a lot more giving to do.  George steps down and precedes to take Alf to the cabin since Alf tells George that he wants to make Willie his next Santa helper.


Alf arrives early Christmas morning down the chimney head first and stuck “HA” as Alf says. Alf proceeds to tell the Tanner family of his hospital adventure and the Tanner family makes a visit to the hospital to visit the dying Tiffany and also find George Foley there as well.  All is well with the world….at least for the time being in Alf’s world.


Alf has always been a favorite sitcom of mine. Back in the day watching Alf with the two boys that I babysat for on Thursday’s nights we would be glued in front of their television. Alf is the inner being of all of us or so it seems. We all have our moments when we try to do good and well, it is not perceived as such. Bringing a branch of poison ivy thinking it was holly or mistletoe. Switching tags so it looks like he has a gift for everyone not realizing that being together as a family is more important then receiving a new sweater or bath robe.

Being with family brings no greater joy to me. To me, it's not about the Christmas gifts, it’s the birth of our Savoir and passing along family traditions of being together on Christmas. Sure the gifts are nice….but it is so much better to give than receive and giving of yourself is easy for anyone to do. Giving of yourself should not just be for Christmas it should be all year round. Just think what a wonderful world it would be if we all were givers instead of takers? 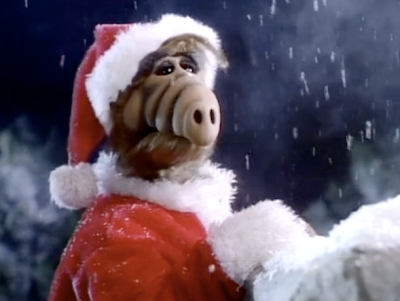 So if you want to take a trip down memory lane, sit down at your computer and pull up Alf’s Special Christmas and enjoy a classic heart warming Christmas tale of giving of yourself enjoy a few laughs as only Alf can provide and for Pete’s sake, keep your cat close by!  HA!
Posted by Joanna at 11:50 AM