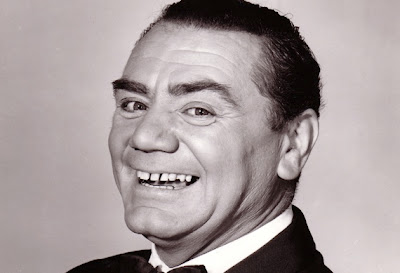 Actor Ernest Borgnine passed away last month during our Christmas in July celebration here on the blog.  However, I don't want to forget the wonderful legacy he's left behind, including this classic Christmas episode from the TV series McHale's Navy.  This episode is 50 YEARS OLD this year!?  Isn't it wonderful that we can still watch and enjoy these older programs.  You can find this comedy episode on the first season DVD set.


In this 1962 episode "The day They Captured Santa Claus," Lt. Commander McHale and his crew prepare for a Christmas celebration for a local island mission for orphans.


Their PT boat is decorated as Santa’s sleigh, the crew are all costumed for the season, and they even steal roasted turkeys from the officer’s mess to provide a traditional dinner for the kids.

Of course, when Captain Binghamton discovers that the men are dressed in ridiculous costumes to entertain a group of children, he wants to punish them for breaking military protocol.  When he realizes that the men's charitable efforts may actually make a good new story for the folks back home (and he can take all the credit), the Captain acquiesces.


But when Santa McHale parachutes onto the island to surprise the orphan children, he is greeted by invading Japanese soldiers who take him as their prisoner of war!


Santa Claus does a lot of fast talking with the Japanese soldiers--even offering the hungry men their own turkey meals.  In the end, it's the arrival of the mission's head mistress Ms. Parfrey with the British navy that saves the day!

My favorite moment in this episode occurs when one young, adorable orphan girl asks Santa Claus for a puppy for Christmas--and the PT crew don't know how they can accommodate such a request.  Living on a remote island in the middle of the South Pacific, the closest thing the men can offer to make this little girl's Christmas wish come true is a baby pig.  In the closing scene, on Christmas day, we see that same little girl happily chasing after her baby pig calling out "Lassie, Come Back!"  It cracks me up every time I see it.

I love this classic comedy in large part because actor Ernest Borgnine makes such a convincing con man and good guy.  Borgnine has appeared in quite a few Christmas stories though I believe this is my favorite.  Do you have another Christmas favorite with Borgnine?  Feel free to share it with us in the comments below.
Posted by Joanna at 5:41 PM