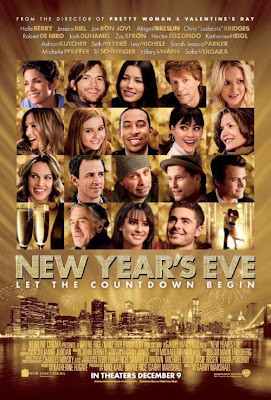 I recently reviewed writer/producer/director Garry Marshall's new book My Happy Days in Hollywood.  Click HERE to see that review again.  His reminiscences on his work in television sent me to seek out Christmas episodes from some of his past series.  Many of these Christmas episodes are some of my personal favorites--episodes I love to watch over and over again. So far, I've recounted Christmas episodes from The Odd Couple, Happy Days, Laverne & Shirley, Mork & Mindy and Joanie Loves Chachie.  Click those titles for the link to return to those posts.  Since the early 1980s, Garry Marshall has been more focused on his career as a film director.  Remember a little movie called Pretty Woman?  Yeah, he's had quite a bit of success with that.  Among his many titles, Marshall directed last year's holiday film New Year's Eve.


This mega-ensemble love story takes place in New York City on December 31st, 2011.  The storylines all converge as the characters find love and togetherness on the one night of the year filled with so much hope and expectation.  The characters’ storylines intersect and merge in the most romantic places throughout New York City including Times Square, Radio City Music Hall, an elite party of celebrities and eventually even a hospital.  The charm of this movie however is the abundance of celebrities filling both major and minor roles throughout the film.

Bike messenger Paul helps timid office assistant Ingrid fulfill a long list of resolutions before the end of the year.  The two race around the City in pursuit of completing her long wish-list before the midnight hour.


Paul’s best friend Randy spends the day trapped in an elevator with back-up singer Elise before they part ways--and re-meet at Times Square.


Paul’s sister Kim is chasing after her fifteen year old daughter Hailey who has been forbidden to go to Times Square where she had made plans to kiss her boyfriend at midnight.


Head chef Laura is catering the elite New Year’s Eve party for Ahern Records only to learn her ex-fiance, rock n' roller Jenson, is performing at the party.  Knowing he’s hurt Laura, Jensen regrets ending the relationship a year ago and now wants Laura back.


In charge of the ball drop in Times Square, Claire Morgan knows her career is in jeopardy when there is a malfunction with the lights and she has fired the only man who knows how to fix them.


Stan Harris is lying in the hospital with only hours to live while his nurse Aimee watches over him.  Painfully, Aimee is spending the holidays away from her husband who is serving in Afghanistan.  It's interesting (be patient!) to see how these two characters are connected to the other storylines!


After serving as Best Man in a friend’s wedding, Sam desperately tries to make it back to the City in time to meet the woman of his dreams.

And, two couples, the Byrnes and the Schwabs are in the maternity ward of the hospital both competing for the prize money for the first baby born in the new year.

I don't want to spoil too much of the plot--the fun is seeing how all the characters and plots intersect by midnight.  Pay close attention because there are far more celebrities in the cast.  Also look for: Cary Elwes as Stan’s doctor; Alyssa Milano as another of Stan’s nurses; Common as Aimee’s husband in Afghanistan; Carla Gugino as the Byrnes’ doctor; Sofia Vergara as Laura’s sous chef; Jim Belushi as the building manager who fixes the broken elevator; Joey McIntyre as the groom in Sam’s story; Larry Miller as Sam’s tow truck driver; Yeardley Smith as Maude, the woman in the RV with Sam; Penny Marshall as herself at the Ahern party; Cherry Jones as Mrs. Rose Ahern;  Chris ‘Ludacris’ Bridges as Brendan the police officer friend of Claire; Matthew Broderick as Claire’s boss; Sarah Paulson as Grace Schwab; Til Schweiger as James Schwab; and, Ryan Seacrest and Mayor Bloomberg as themselves in Times Square.

In his book, Garry Marshall says he really likes making these ensemble movies (Marshall also directed 2010's Valentine's Day) because he can schedule the biggest Hollywood stars asking only that they be available on set for three days or so at a time.  This arrangement makes it quite easy for busy actors to take part.  And, Marshall says the constant changes brought by a cycle of three days shooting per segment makes it exciting for him as his time on set is constantly changing.  I found those details about Marshall's work process to be quite interesting.

Have you seen New Year's Eve yet?  Which of these celebrities in the cast do you most admire?
Posted by Joanna at 8:20 PM