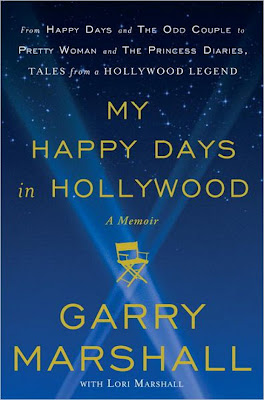 Yes, I watch alot of TV.  But I also read quite a bit.  And, yes, I read about the television and film industry.  So you've got to know I was all over Garry Marshall's new autobiography that came out this year.  I know Marshall as the successful writer-producer of several of my favorite TV shows from the 1970s.  But his very long and successful career in Hollywood, before and after these TV shows, fills the pages of this book with his keys to success for what it takes to make it in the crazy business of show.


Even if the name Garry Marshall doesn't mean something to you immediately, you may recognize his face.  He's made screen appearances many times on TV.  Some times he's sitting behind a drum kit on Happy Days and Laverne & Shirley.  He also played TV network executive Stan Lansing on Murphy Brown for several seasons.  But these acting gigs are very minor in this man's career.


Garry Marshall is more known as the very successful write-producer-director of some of the biggest successes in Hollywood.  Starting his career as a writer, he penned jokes for stand-up comedians in New York.  By the 1960s, he was writing for The Dick Van Dyke Show, The Joey Bishop Show and The Lucy Show.  He parlayed those successes into producing and writing for TV series including The Odd Couple, Happy Days and the spin-offs Laverne & Shirley, Mork & Mindy, and Joanie Loves Chachie.

Marshall used the skills he learned in television to become the go-to film director for some of Hollywood's biggest romantic comedies.  Maybe you've heard of a couple of his films: Beaches, Pretty Woman, Runaway Bride,  The Princess Diaries--and more recently the ensemble films Valentine's Day and New Year's Eve?


One of the things I loved about reading his book is that I could hear his thick New York accent (he's from the Bronx) as I read the sentences.  His own unique voice, literally and figuratively, can be heard as he describes his career successes and failures.  I found his experiences to be quite inspirational as he details how he's learned from his own failures (and successes) to continue taking chances and moving forward in such a tough industry.  I learned how hard he worked as a writer in order to make his way into the industry, even giving away jokes in order to earn the trust and respect of successful comedians.


A difficult experience early on was the tension and fighting on the set of Laverne & Shirley.  It's amazing how hard he is on Penny Marshall (his real-life little sister) who played Laverne DeFazio in that series.  Perhaps he's able to be more truthful because they are family.  But those professional difficulties are coupled with exuberant pride for his sister on her own film directing successes--you know she directed Big, A League of Their Own and Preacher's Wife, right?  But learning how to work with the difficult women on Laverne & Shirley gave Garry the confidence to move into film directing and to get the best performances from strong women such as Bette Midler and Barbara Hershey in Beaches, Michelle Pfeiffer in Frankie and Johnny, Goldie Hawn in Overboard, Julia Roberts in Pretty Woman, Julie Andrews and Anne Hathaway in The Princess Diaries and its sequel, and Jane Fonda and Lindsey Lohan in Georgia Rule.

It was also interesting to read about how hard he works to make his film sets a pleasant work place.  No wonder he's been in this industry for so long--he knows enough to surround himself with the people he knows he can work with comfortably and creates a relaxing atmosphere for everyone else.  This explains why he's worked with some of the same people over and over again both in front of and behind the camera.  Did you know actor Hector Elizondo has appeared in all of Marshall's films?


I initially picked up Marshall's autobiography because I was interested in learning more about the TV shows I grew up watching such as The Odd Couple, Happy Days, Laverne & Shirley and Mork & Mindy.  But I ended up being more impressed by this one man's ability and willingness to adapt and move forward with a positive attitude after struggling and sometimes failing.  Isn't that what we're all trying to do with our lives?
Posted by Joanna at 2:04 PM