One month ago, I spent a week in New York City doing more research for the updated edition of the encyclopedia Tis the Season TV.  It's scheduled to be released in 2020. You know how I love to hunt down Christmas pop culture destinations when I travel--and this trip was no different. Now there are probably one million different places in NYC that I could have visited to experience a Christmas pop culture connection, but I only had time for a few. Where would you go in NYC to connect to a Christmas pop culture landmark?

Everyday I was in the city, on my way to The Paley, I walked passed the intersection of 8th and 53rd where I saw a sign for Jerry Orbach Way, a segment of the street named in honor of the great NY actor. I'm a big fan--who isn't, right? He was a Broadway legend and played Det. Lenny Brisco on TV's Law & Order. Okay--there isn't a Christmas installment of Law & Order, but he was the original Chuck Baxter on Broadway in the musical Promises, Promises. Do you know this musical? It's the stage adaptation of the Billy Wilder movie The Apartment. (Orbach played the role Jack Lemmon played in the film). If you'll remember, The Apartment is set during the Christmas and New Year's holidays--and so is Promises, Promises, with the musical featuring a couple holiday songs. Yup. I have the original cast recording on vinyl. You can see the cover HERE. You should probably look for a copy for yourself too because the music and lyrics were written by Burt Bacharach and Hal David. Yeah, it's good stuff.

Orbach was also the voice of Lumiére (the candlestick) in Disney's 1997 short Beauty & the Beast: The Enchanted Christmas. If you haven't seen it, I recommend checking it out. The visual representations of music throughout the animated story are breathtaking. Much of the voice cast is carried over from the original 1991 Beauty & the Beast movie too so the quality remains high. 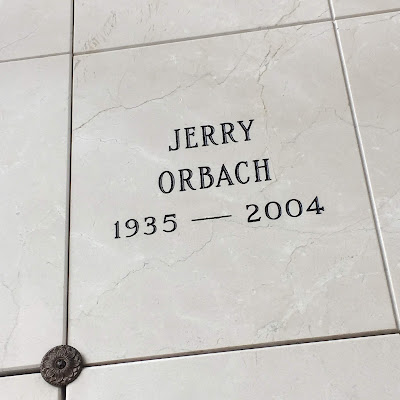 Turns out Orbach was interred at a cemetery close to where I was staying in the city. (I was staying in Hamilton Heights). So I made a quick visit to see the final resting place of Orbach. Before I went to New York City, a friend had told me that if I was looking for Christmas pop culture destinations, I had to visit Trinity Cemetery. I had every intention of going, however not until I was sitting on the bench in front of Jerry Orbach did I realize I was already in the exact cemetery my friend had recommended. It was just a short walk (not even 100 feet, if I remember correctly) to my next popular culture Christmas destination.


This is the final resting place of Clement C. Moore, the author of the poem "A Visit from St. Nicholas," more commonly known as "Twas the Night Before Christmas." The poem has been adapted into numerous animated TV specials, and referenced in countless more. Most of us can probably recite it from memory, or at least parts of it with a few prompts! My friend told me that a nearby church still holds a candle vigil each year just before Christmas at the gravesite, the participants read the poem, and then they celebrate the life of the writer. Isn't that nice?


If you're curious, I did bump into one celebrity while I was there. In the subway, I was waiting for an uptown train alongside actor Matthew Broderick. You may remember that he played the narrator in last year's TV musical A Christmas Story Live, but he'll always be Ferris Bueller to me!


Near the end of my week, I had one more Christmas pop culture experience. At The Paley, I watched a very rare 1961 Christmas TV special of actor Richard Burton recalling his friend and fellow Welsh man Dylan Thomas. Burton shares the story of the first time they met, in a bar in New York City called the White Horse Tavern. The rest of the TV special is shot inside the White Horse Tavern with Burton reading Thomas' much-beloved holiday story and drinking a couple of beers. They don't make 'em like this anymore, do they? Anyway, this 1961 TV special was so extraordinary--sitting in the Paley, I googled the White Horse Tavern and was surprised to see it is still open and operating! So I literally packed my stuff up right then and went down there.

Once inside I could see that it is indeed the same place, open since the 1880s, and they take their literary history seriously. There's even a huge mural-sized photograph of Dylan Thomas in a back room. I was in the right place! In the 1961 TV special, Richard Burton seats himself at the wooden bar in the center of the tavern. When I walked in, that's exactly where I took my seat as well. You probably remember that I'm a huge fan of the 1987 TV special A Child's Christmas in Wales. Read my discussion of it again HERE. If you follow me on Instagram, you may remember many of these photos from last month. Now you know what I was doing in New York City.