Are you following along with the progress of my paper dress project, celebrating the 20th anniversary of DVD Netflix? I've been a subscriber to the DVD service for the past 13 years and have saved EVERY single envelope front from all the DVDs I received in the mail. I always imagined making a paper dress with them and now DVD Netflix is sponsoring it! I'm having so much fun with this project. As a Christmas TV and film writer, I've relied on Netflix to do quite a bit of my research over the years. This project is a dream come true.

Since all the paper envelopes are red, I decided to take my inspiration from the red dress worn by Rosemary Clooney in the finalé of the 1954 movie White Christmas. I've hired a designer and we're making the dress which will be revealed on Nov. 12th. This is the 4th installment on my website of the dressmaking process. If you've missed any of the previous three essays, here they are again:

My motivation to save the DVD Netflix envelopes in the first place was because I'm a crafty person and I thought I could one day make something with them. Even though I have passed my collection of more than 1,500 envelope fronts to my designer to make the paper dress, I continue to receive more Netflix envelopes in the mail with each new DVD I rent. As the dress nears completion, I realize I could use some fashion accents to wear with the dress so I turned to my DVD Netflix paper envelopes for material. 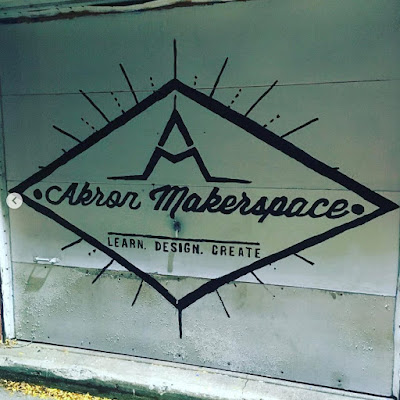 My friend Devin Wolfe at Akron MakerSpace invited me to come explore the tools and use my imagination to see what I could make there. I decided I needed a hair accessory and a necklace. With his help, he showed me how to use the laser cutter and in no time I was turning out festive holly leaves cut from my paper envelopes. 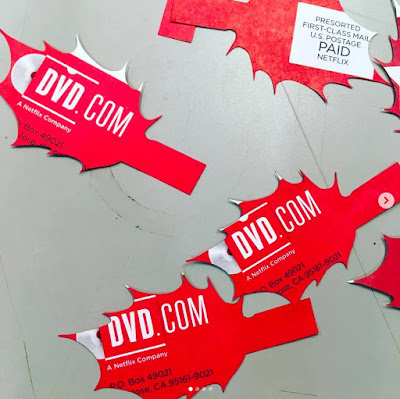 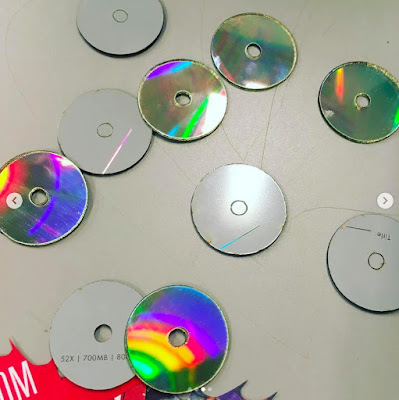 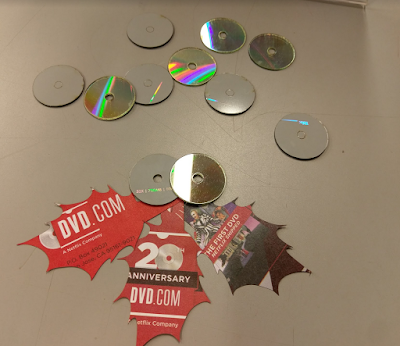 Check out the video of the laser cutter in action making my holly leaves from Netflix envelopes!

I used the same laser cutter to cut old CDs to make what looks like small DVDs to add to the hair accessory and for the necklace. Then I used my trusty hot glue gun and a plastic hair band to make a red holly leaves with DVD berries hair accessory. I used the hot glue gun again to make a small loop to attach a mini DVD to a chain for the necklace. I'm pretty pleased with the results--what do you think? Many thanks to Devin and the Akron MakerSpace for the use of the tools.


Over the past several months of this project, I can't help but see Rosemary Clooney everywhere I turn. Explaining the project to a friend, we both began to sing "Sisters," an unforgettable song from the movie White Christmas. I remembered that the song was also in an old episode of the sitcom Mad About You--so I went back to watch it again. The scene has Jamie Buchman (Helen Hunt) and her sister Lisa (Anne Ramsay) singing the song and performing a choreographed dance taken right from White Christmas. Although this isn't a Christmas episode, Jamie and Lisa are singing it for their parents as a re-enactment of what they did as children after seeing the movie on TV. How can you NOT sing along to that song?

I'm also reminded that Rosemary Clooney herself appeared in a Christmas episode of the medical drama ER. She plays the pleasant but confused Alzheimer's patient Mrs. Cavanaugh who roams the halls of the hospital singing Christmas carols. In the screen shot above, she's singing "Have Yourself a Merry Little Christmas" as the doctors, staff and patients go about their business all around her. This first season holiday moment was possible because Rosemary's real-life nephew is George Clooney, who played Dr. Doug Ross in the series. It's a wonderful and unforgettable cameo by the great singer.


Another instance of Rosemary Clooney popping up in my life recently is in a podcast discussion I had last night with the Tis the Podcast crew--which will be released soon. They invited me to join them to talk about the 2007, third season Christmas episode of Supernatural. I was pleased to bring up that the emotional and heart-felt final scene with the Winchester brothers exchanging gifts and honoring the yuletide is accompanied by the background song "Have Yourself a Merry Little Christmas" sung by Rosemary Clooney. Her stripped down, simple version adds to the melancholy moment, perfectly capturing the tone of the scene for Sam and Dean. Rosemary seems to be everywhere I turn these days, and I'm loving it!

Don't forget, we're revealing the dress on Nov. 12th. Thanks for following along.