The month of October is always a fun time to look back on Halloween/Christmas cross-overs. The third season, 2007 Christmas episode of the TV series Supernatural is a must-see example of a horror/fantasy series with a decent Christmas story. The episode "A Very Supernatural Christmas" is  one that is rich enough that a discussion about it will reveal more of its charm and layers. Let's break this down.

If you're not a regular viewer of the series, Supernatural is currently airing on the CW in its fourteenth season. The show centers on the Winchester brothers--Sam and Dean--who investigate and hunt down supernatural creatures. There is a direct line between earlier shows, such as Kolchak: The Night Stalker, The X-Files, and Buffy the Vampire Slayer, and the later fantasy/horror series Supernatural. As of this date, I believe Supernatural has only created this one Christmas episode for the entire run of the series. That's okay--this third season episode is a solid and satisfying one. Although it's a dark story, it also has quite a bit of humor in it, and seems less intense than others in the series.


The episode begins with a familiar animated segment--it's actually the Specials logo CBS used in the 1970s and 80s before they aired special programming, including Christmas TV specials. If you're old enough to have watched Rudolph the Red-Nosed Reindeer, A Charlie Brown Christmas, and Frosty the Snowman on TV in the 1970 and 80s, then you probably saw them airing after this Specials animated segment. (All three of those classic animated TV specials aired on CBS in the 70s and 80s when this segment was popularized). Although Supernatural doesn't air on CBS, the series' use of the animated intro creates a familiar excitement and nostalgic tone for their own holiday episode.


In this story, the Winchester brothers are posing as the FBI to investigate the disappearance of several people. In these cases, it looks as though the victims have been abducted from their homes and the bodies removed through their chimneys. Yikes.

Recognize actor Jared Padalecki from other Christmas programs? Yes--he was in the disastrous movie Thomas Kinkade's The Christmas Cottage (2008) and he played Dean on Gilmore Girls which had a couple Christmas episodes. Jensen Ackles was also in the 1996 Christmas episode of the short-lived Mr. Rhodes. Yeah--I don't remember it either.

Looking into a possible supernatural explanation, Sam begins looking into an evil Santa or anti-Claus, which leads him to Krampus--a monstrous creature of Germanic folklore known as one who punishes the naughty. The brothers also discover that the two recent victims in Ypsilanti, Michigan had both recently visited the same Christmas tree lot. They decide to visit the lot to further the investigation.

Exploring stories about Krampus has been very trendy over the last 10 years or so, in movies and on television. It's no surprise that Supernatural would attempt to go there. I've seen nine horror movies about the monster--from mainstream big budget films to bargain basement indies. (In case you're wondering, I liked 2015's A Christmas Horror Story, and 2015's Krampus starring Toni Collette). I've also seen Krampus included in numerous TV episodes, from Scooby Doo! Mystery Incorporated, The Aquabats! Super Show!, and American Dad! to NCIS, Murdoch Mysteries, and more. My best guess is that we will continue to see more holiday programs drawing upon this folklore creature.

At the Christmas tree lot, the Winchester brothers spot a suspicious man playing Santa Claus for the kiddies. They continue their investigation by following him to his home later that evening, but it's a red herring. Following more clues, Dean and Sam eventually recognize that several victims had the same wreath in their homes. The wreaths are made from meadowsweet, a plant that was commonly used by pagans for human sacrifice. The brothers follow the trail of clues and visit the woman who makes the wreaths.

Throughout this episode, we also see flashbacks to Christmas 1991. These flashbacks, or memories of an earlier Christmas, show Sam and Dean spending the holiday alone in a grungy motel, much like they do now. We see that young Sam likes Christmas but doesn't understand why his father doesn't spend much time with them (Sam clearly doesn't yet know that his father is hunter, like he's grown to become) and we see Dean working hard to make Christmas a special time for his younger brother. These scenes give more backstory to the characters and more emotion to the episode.

The flashbacks also contrast with Sam's reluctance to celebrate Christmas this year. He eventually explains that he's reluctant to allow himself to celebrate knowing that this is their last Christmas together (this refers to a season-long story arc about his brother Dean offering his life to a demon to save another's life). Whew! Lots of emotional threads in this story but the point made is that these brothers care for each other, they share an important family connection, and Christmas can be a painful and lonely time of year for them.

If you're quick, you can catch Sam watching a Rankin/Bass Animagic Christmas TV special on the hotel television in the flashback scenes. The scene is quite brief but I think it's The Year Without a Santa Claus. What do you think?

The brothers visit the address of the woman they are told makes the meadowsweet wreaths. And, they are greeted at the door by the unexpected--a friendly, suburban, middle-aged couple who are happy to speak with them. Madge admits she loves making wreaths for the holidays. Sam and Dean decide to come back later.

Later that evening, the brothers break into the home assuming the Carrigans are not home. They search the home looking for evidence that a demon or monster might live somewhere inside. In the basement they find body parts and bloody accessories used to abduct the victims. Before the Winchesters can hunt down their monster, they are both knocked unconscious from behind.


It turns out that the Carrigans are centuries-old pagan gods that take human sacrifices once a year--just around Christmas. Over the years they have assimilated to fit in around humans but they still require what they have always needed. As Madge and Edward prepare the brothers for the ritual sacrifices, the four share a conversation filled with exposition about being a pagan god and quite abit of humor. For example, Madge insists on trying not to curse--she prefers the euphemism "Oh fudge!" when she's angered. Not only does this show how the pagan god has humorously assimilated among the humans but it's also a popular reference to everyone's favorite movie A Christmas Story in which young Ralphie Parker also uses the silly phrase "Oh fudge!" The tension is high in this scene as the Winchesters are prepped to be ritually sacrificed while the brothers are making wisecracks at these two mundane monsters.

The Carrigans are eventually distracted and Sam and Dean take advantage of their chance to escape the bindings. The brothers barricade themselves in another room just long enough to tear apart the Carrigans' Christmas tree and fashion wooden stakes with the branches. You know where this is going, right? Nothing brings down an evil supernatural creature like a wooden stake from a Christmas tree! I even liked it when I saw the same weapon used in the 2005 holiday episode "Billy and Mandy save Christmas" from the Cartoon Network series The Grim Adventures of Billy & Mandy. In that offbeat animated series episode, young Billy and Mandy find themselves at the North Pole to meet Santa Claus when they discover that he's been bitten by a vampire! If this is your sort of thing, you really must hunt down that episode--it's worth it. The guest voice cast--Carol Kane, Gilbert Gottfried, and Malcolm McDowell--raise the holiday story to new heights as well.

Returning to Supernatural, the episode ends on a sweet but sad note with Sam surprising his brother Dean with an openness to celebrating Christmas. Back in their hotel room, the brothers exchange gas station-purchased gifts and reflect on the moment. It's a hard-won, peaceful holiday moment that seems bittersweet as Rosemary Clooney's simplified version of "Have Yourself a Merry Little Christmas" plays in the background. That song was originally introduced in the 1944 movie Meet Me in St. Louis by Judy Garland in a tender and sad scene shared between sisters Esther and Tootie. Here, the same melancholy tone is achieved as Sam agrees to reach beyond his own sadness to make his brother happy by celebrating what may be their last Christmas together. Fans of the series will see the original behind Dean's necklace he always wears--a gift from his brother at Christmas 1991. 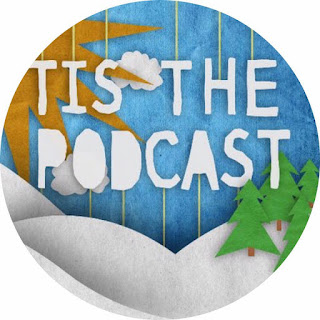 I was recently invited by the team at Tis the Podcast to join them in a discussion of this holiday episode. It's available on iTunes. Give it a listen and let me know what you think.