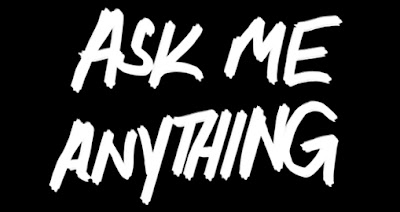 In 2015, I opened the door for readers to ASK ME ANYTHING. That request brought about many thought-provoking questions and I enjoyed responding too. So we're doing it again. Need to see the request again? HERE ya go. To see ANSWER #8 again, click HERE.

The following question came from David:

How do you feel personally about the evolution of Christmas TV from the more sincere, wholesome presentations of the 1950s-1970s to the edgier and often more cynical holiday offerings today - or do you even agree with that premise?

Thanks for your question David. This is a good question about how television and Christmas on TV have changed over the decades. I'm eager to unfold it here with a little more depth. David mentions "edgier" and "cynical" Christmas presentations and I can certainly point to examples of sarcastic, outrageous, dark, ironic, twisted, irreverent and even offensive holiday programs. I have an entire chapter about numerous examples in The Christmas TV Companion book. There is no question that these stories exist. However I will say that it isn't something new. Edgy and dark Christmas stories have been with us--and popular--for a long time. Some even before television. (Many historians have argued that Charles Dickens' A Christmas Carol was edgy upon its initial release in its day!) I would argue that the classic Jack Benny Show "Christmas Shopping" episode too is a very dark one. If you recall, Benny is shopping at a department store and buys a wallet for Don Wilson. As Benny continues to shop for his other friends, he repeatedly returns to the sales clerk (Mel Blanc) to change the message on the tag on Wilson's gift, driving the frustrated clerk to suicide! (The stressed-out clerk steps off-screen and we hear a gunshot! Benny moves behind the wallet counter and STEPS OVER something to reach Wilson's gift. The implication is that the sales clerk's body is lying on the ground!) The 60 year-old Christmas TV episode is no doubt, a dark one. I also find the 1952 episode ".22 Rifle for Christmas" from Dragnet an extremely dark holiday installment. Sgt. Joe Friday and his partner find a missing nine year-old boy who had gone into hiding after he accidentally shot and killed his best friend with the rifle he had gotten under the Christmas tree. However, this shocking Christmas episode was in step with the series itself that regularly told tragic tales.

But if I understand the question correctly, I'm being asked about an increase in outrageous holiday stories. Yes--I would agree that there has been an increase in both the degree of outrageousness and the number of edgier Christmas programs. I believe this is true for several reasons. One major reason we have an increased number of edgier, cynical, outrageous and even irreverent and offensive Christmas programs is because we have more edgy, cynical, outrageous, irreverent, and offensive TV programming. Back in the 1980s and 90s with the increase in cable TV, different networks began to create their own brand identities to try to compete for specific viewing demographics and sell appropriate commercials. This of course led to the development of networks devoted solely to children viewers, those interested in sports, African-Americans, women, etc. as well as any variety of attitudes, interests and viewpoints. Original programming was needed by these TV networks to attract specific viewers and this included Christmas programming as well. For example, in the late 80s, the fledgling Fox Network saw itself as hip, young and edgy and it created what it thought was hip, young and edgy TV programming. Those TV series often created hip, young, and edgy Christmas episodes too--think: Married With Children, Herman's Head, The Simpsons, Woops!, et al.

In the years since this expansion, we can see an increase in programming targeted for even more specific niche audience tastes and attitudes--programming that isn't intended to attract very large audiences but instead very loyal ones. A quintessential example is Cartoon Network's Adult Swim block of programming. This is a block of animation series with a very specific range of taste, style, and sense of humor. It is no surprise that the Christmas episodes from these series also reflect this same taste, style, and sense of humor--or as some are want to say: same lack of taste, style and sense of humor. Ha! You get the idea. Those few of you who may watch Adult Swim series have probably watched not just one--but many of the series that air during the block, have watched them repeatedly, and most likely have purchased the programming as well. Am I right?

Another reason we have an increased number of edgier Christmas stories, generally speaking, is that television has changed over the decades to reflect society's attitudes, and as a society we have been more willing to accept in ourselves a wider range of emotions and reactions to the holiday season. This explains examples such as NBC's 2012 music special Blake Shelton’s Not So Family Christmas and NBC's 2013 music special Kelly Clarkson’s Cautionary Christmas Music Tale. While these examples are not two that venture too far from the center, they acknowledge in their titles that the conservative world of country music and the mainstream are willing to come to the edge, if not step on it.

The initial question asked of me also inquired how I personally feel about this evolution in storytelling on TV. As a historian of Christmas on TV, I watch it all and document it. Long ago, I let go of any expectation of liking (or being entertained by) every holiday program I watch. For me, I struggle with watching all of the Christmas TV programs targeted to toddlers and pre-school aged children more than I do the offensive shows. (I think there are MORE programs aimed at toddlers and pre-schoolers than there are truly offensive Christmas programs). I find I just don't have a lot of  patience to enjoy the simplistic (sometimes banal) Christmas programs aimed at the youngest of viewers (now I'm NOT talking about Sesame Street! but others). I still watch them and document them because it's my job, but I don't always find it an easy task. As for the edgier, cynical Christmas programming--some of it I like and enjoy, and some of it I can do without, but I'm interested in documenting all of it.

Thanks again to David for stepping up and asking his question.  Anyone else have a question for me? Please feel free to ask it below in the comments, or find me on social media.