Last summer on a trip to the Detroit Festival of Books, I picked up several vintage Christmas albums at a local record store. See that post again HERE. That post was so popular, I thought I'd share more of my Christmas record collection. Just to be clear--my collection focuses on Christmas records with a television or film tie-in.

Below are some of the records in my collection. Do you have a Christmas record with a television or film tie-in? Tell me about it in the comments below.


If you're going to collect Christmas records with a television tie-in, your collection must include the original soundtrack to Rankin/Bass' 1964 animated TV special Rudolph the Red Nosed Reindeer. Lucky for me, this was a birthday gift from a friend a couple of years ago. It's nice to have friends looking out for me.


Another Rankin/Bass favorite soundtrack is from the 1970 Animagic classic Santa Claus is Comin' to Town. My album copy is not in the greatest shape but I'm careful with it. I've had this record for decades--long before I was writing and researching Christmas entertainment. So glad I've held on to it.

One of my more recent acquisitions is this Disneyland Records release of the story and soundtrack of the 1974 traditional cel animated, Rankin/Bass Christmas TV special Twas the Night Before Christmas. Do you have a favorite Rankin/Bass soundtrack?

Last year in Detroit, I found the soundtrack to Rankin/Bass' Cricket on the Hearth--see that album cover again HERE. I'm still looking for the Rankin/Bass Frosty's Winter Wonderland soundtrack. Might as well try to complete the collection!


This is another record that I've had in my collection for decades--long before I was writing about Christmas entertainment. It's just a fabulous pop culture item to have in any record collection. This album isn't a collection of the musical compositions written by the Vince Guaraldi for the Peanuts TV specials. Instead this is a recording of the dialogue and background music of the 1965 Christmas TV special. Sure Guaraldi's music is here, but the recording is the animated TV special's story and dialogue. The twelve-page storybook within the album's covers complements the visual storytelling with the audio recording. I can still recall the excitement I felt for record-and-book sets like these, to experience the joy of TV specials seen only once a year.

I'm also amazed that I found this LP--despite its condition. This is the cast album from the 1969 musical Hallmark Hall of Fame TV special The Littlest Angel. The cast for this NBC musical is amazing--Johnnie Whitaker, Fred Gwynne, Cab Calloway, Tony Randall, Connie Stevens, and more. The feature-length TV special was adapted from the popular children's book by Charles Tazewell. I wrote about this TV special and the album a few years back. Click HERE to see it again.

The back cover is a flap that opens to reveal more printed information. The previous owner had pulled at the perforated flap and it is detached. However, I still have it and keep the two pieces together.


The back flap opens up to reveal a pop-up section with color images from the musical. 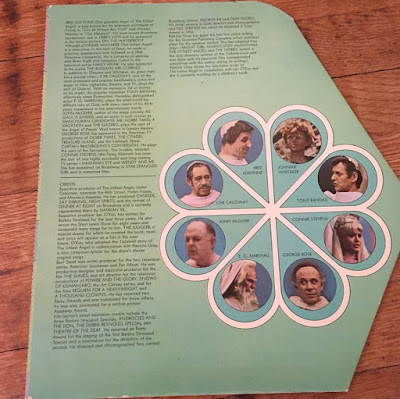 The interior of the back flap includes further credits for the actors and the production staff of The Littlest Angel. I'm not sure how many other Christmas Hallmark Hall of Fame productions had an official soundtrack release.


I also have a copy of the Disneyland Record and eleven-page storybook from Disney's 1961 movie Babes in Toyland. The story is narrated by Little Boy Blue, and includes music written for the Disney movie. It is NOT the original soundtrack to the movie, which means Annette Funicello, Tommy Sands, and Ray Bolger are not heard on this album. In fact, you can clearly identify Thurl Ravenscroft as the voice singing Barnaby's (Bolger's character) songs. It's still a fun album with incredible artwork in the storybook's pages.


I'm also very pleased to own the story and dialogue LP from the 1977 animated TV special A Cosmic Christmas. The Christmas special was created by the Canadian animation company Nelvana--the same company that created the animated segment within the Star Wars Holiday Special. Yup. This Canadian record came to me from Christmas music collector Jeff Fox. What a gift! Thanks Jeff.


The soundtrack to the 1974 movie The Odessa File is another record in my collection. This movie isn't exactly one that will inspire the holiday spirit but the action/thriller is set during the holiday season. Its unique soundtrack was written by none other than Andrew Lloyd Webber and includes the song "Christmas Dream" sung by Perry Como. The song oozes Christmas--even if it originally appeared in this crazy movie about a journalist hunting Nazis.


I knew this was a gem as soon as I found it in the thrift store. The cheap design and lack of information on the cover don't do much to reveal what treasure lies within. This is actually the original broadcast recording of the 1957 Christmas TV episode of The Frank Sinatra Show. It includes the dialogue and songs by Sinatra and his guest Bing Crosby. I know, right!? That's just Side 1. To see what I wrote about this fantastic 1957 TV program, click HERE.

Side 2 is a mystery to me. I believe it is from a radio show. It features Bing Crosby and his four sons Gary, Lindsay, Philip, and Dennis in a Christmas program. The tracks listed on the album cover: Adeste Fidelis, Jingle Bells, Xmas Feeling, Hitch a Ride with Santa Claus, The Snowman, That Xmas Feeling, and Silent Night. If you know more about this recording--especially the radio program, please let me know. It may be Kraft Music Hall. Bing thanks a man named Ken offstage--maybe the host, maybe a band leader. Does any of this sound familiar?

In addition to Christmas records, I also collect Christmas books with a film and television tie-in. Want to see what I've got?