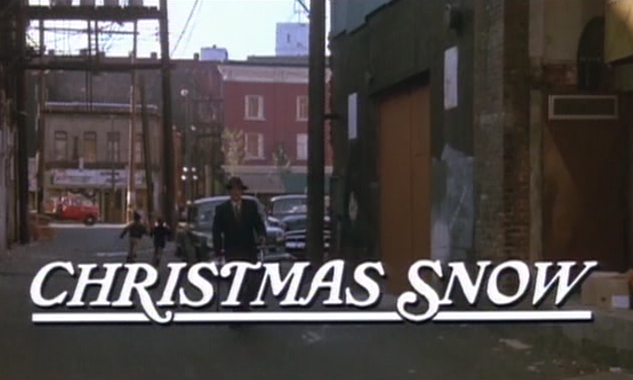 With the dozens of hours of new Christmas TV movies generated each November and December, it's so easy to forget about the classics.  Sometimes we can lose track of our Christmas spirit unless we actively incorporate the past into the present.  How long has it been since you've seen 1986's Christmas Snow?  Though I see this movie in the TV listings each December, I think Christmas Snow is too easy to overlook in cable TV's many holiday offerings--maybe because of its familiar-sounding title.  But I never forget this movie-- it has an incredible cast and a heartfelt story.

The optimistic Widow Ma runs a candy store with the two children she’s taken in.  Two days before Christmas, their cantankerous landlord Mr. Snyder informs them he has plans to turn his property into a laundrette and the widow and her children will not only have to close the store but find a new place to live.

Despite Mr. Snyder's threats, Ma is hopeful and thinks things will eventually work out well for her family.  The widow tries to stay focused on her immediate concerns such as making the scheduled deliveries and running the candy store.  Just as she predicts, there is a rare snow storm the covers the city on Christmas Eve.  When Mr. Snyder misses his appointment to meet with the launderette franchise operator, Ma begins to worry.

Mean Mr. Snyder seems to have disappeared, but no one is worried except Ma.  Amy and Wally think his absence may solve all their problems.  How can they be forced to move if Mr. Snyder stays missing?


However, Ma fears Snyder is in trouble.  Although Ma needs to keep her business open on Christmas Eve, she decides they close it to go look for their landlord.

Amy sets out to follow the old man's tracks in the freshly fallen snow.  Mr. Snyder has an unusual gait and walks with a cane so his tracks are distinguishable from most others'.  But when Amy follows his tracks into the local cemetery, the young girl becomes frightened from her brother's many scary stories and she flees the graveyard before reaching the end of the tracks.


The next day, Christmas morning, Ma is still worried about Mr. Snyder's disappearance.  She explains to the children that she can't celebrate Christmas and open gifts with Mr. Snyder's absence looming about.  The children still believe that their mean landlord's disappearance is the answer to their problems--but Ma's maturity and compassion speaks otherwise.  It is then that Amy shares her experience of hearing a ghostly wail after following Snyder's tracks in the snow at the cemetery the day before.

Just as Ma feared, Mr. Snyder was in trouble, having fallen into a recently unearthed grave in the cemetery.  Snyder was terribly frightened that no one would ever find him in the hole over the holiday and is grateful that Ma came looking for him.  He also confesses that the idea of his new business opportunity offered him no comfort while he was trapped--but the hope that Widow Ma would miss him and come looking for him was all he wished for.


Though this TV movie runs less than an hour in length, it efficiently tells its story and expresses more character than most other Christmas TV movies.  Ma's insistence that people are more important than business, betrayal, or hurt feelings is inspiring--and not just at Christmas!  It's also a distinctive story that you won't confuse with many others.  Too bad the title isn't just as distinctive.  Fortunately, this short movie can be found on DVD.

Have you memories of Christmas Snow?  Do you like it as much as I do?