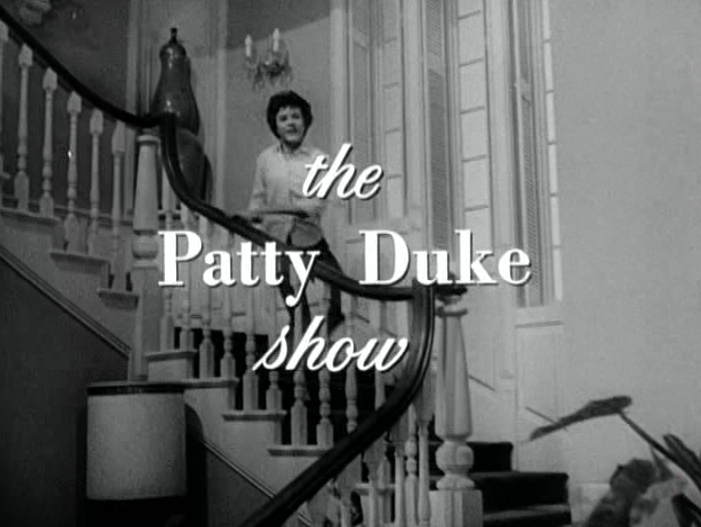 I want to pick up where I left off with the previous Patty Duke Show episode, 1963's "Christmas Present."  The story continues during the week following Christmas.  The episode entitled "Auld Lang Syne" continues the same story introduced in the Christmas episode in which Cathy's father Kenneth Lane has been fired from his job working as a foreign correspondent for the newspaper, The Chronicle.  I have researched and cataloged New Year's episodes in addition to the Christmas ones because I've found that these TV stories generally continue the festive holiday celebration.  Many of these New Year's stories also overlap with Christmas plots, and it is quite common for these stories to incorporate the same, familiar Christmas themes and elements including togetherness and family, celebrations, second chances and renewal, forgiveness, and miracles.  "Auld Lang Syne" is no exception.

In this follow-up episode, unemployed Kenneth Lane is preparing to find a new job.  He hopes to be able to find work in the newspaper field, perhaps still writing.  Though Cathy knows that a desk job for her father will allow them to spend more time together, she wants him to be happy.  Kenneth is at his best when he's out seeking adventure as a foreign correspondent and not stuck behind a desk.


Patty wants to help her uncle and she puts a couple of her schemes to work.  First, Patty makes herself look like Cathy and she lavishes Mr. Castle with flattery, hoping to appeal to his vanity.  When that plan falls flat--as many of Patty's schemes do--she has another idea.  What if she gets Uncle Kenneth to write a best-selling novel about his adventures and experiences as a foreign correspondent?  Patty knows J.R. hates it when his writers move on and become best-selling authors.  Patty hopes J.R.'s weakness will force him to re-hire Kenneth just to keep him from moving on and becoming even more successful.

Patty eventually convinces Kenneth to try his hand at writing a book while she attempts to solicit a publisher on his behalf.  This plan goes about as well as expected.  Patty and Cathy call upon Bennett Blake, a book publisher Patty saw interviewed on television, and he explains that he doesn't consider books that are written by unpublished authors.  That is, until Blake hears the girls refer to the writer by name--Kenneth Lane!  Blake explains he's been trying to convince the popular foreign correspondent to write a book for years--and has his secretary draw up a contract immediately.


Patty and Cathy are excited for Kenneth to hear their good news but he's frustrated with trying to write the book.  Meanwhile, J.R. Castle returns to the Lane home.  Kenneth's friend, the rebel general, has successfully led the take-over of Kurdistan and wants to be interviewed by no one except Kenneth Lane.  J.R. wants the exclusive interview for The Chronicle but he's too stubborn to re-hire Kenneth himself.  Kenneth's brother Martin isn't willing to make things easy for J.R., insisting that J.R. humble himself to offer Kenneth a new position as a foreign correspondent.

Kenneth is hesitant to give up on his promise to spend quality time with Cathy and return to being busy with his foreign correspondent job, a job that takes him away from home for long periods of time.  But Cathy insists he make himself happy--she enjoys living with her cousin Patty.  Father and daughter can visit together again next Christmas.  The Lane family finds themselves at the stroke of midnight on New Year's Eve at the airport, saying goodbye to Uncle Kenneth as he flies to Kurdistan to pursue the news story of the year.  With the holidays behind them, Patty and Cathy can get back to high school hijinks once again.

Do you have a favorite New Year's Eve episode, special, or movie you like to watch year after year?