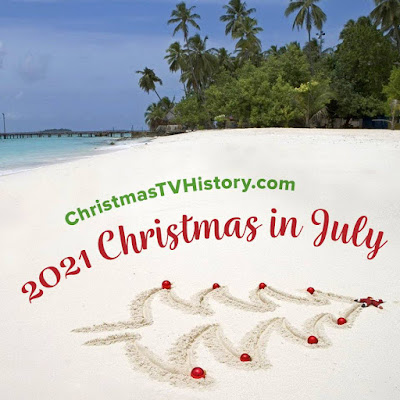 Merry Christmas in July! Today begins the month-long celebration of Christmas entertainment. As announced before, each day this month I will be sharing brief reminisces about Christmas TV episodes, specials, and movies with a FUN IN THE SUN attitude. Expect a run of Christmas in July stories, tropical yuletides, and island themes. Just a little something different and a way for me to show off the diversity of holiday stories I've collected in the encyclopedia Tis the Season TV (the updated and expanded 2nd edition being released later this year).

For the next couple days, let's look at Christmas stories from the Southern Hemisphere. The December holiday down under takes place during the summer. 1947's Bush Christmas is an Australian-made, theatrical release movie that reflects that seasonal difference to those expecting a wintry tale. 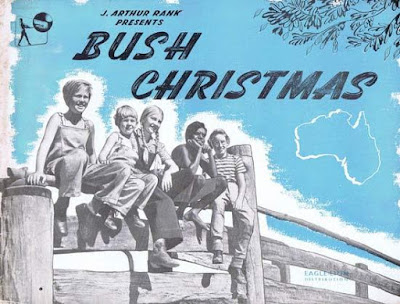 In Bush Christmas, a group of children and their native-Australian friend Neza spend Christmas break tracking thieves that stole the horses from their family’s ranch. Across the breath-taking wilderness landscape and the New South Wales mountains, the children play a cat-and-mouse game with the thieves until the police can come and arrest the wrong-doers. There’s a limited amount of Christmas content but in the end the children enjoy their favorite holiday meal and wear their paper crowns. The story is a Western-style adventure for children.

This Australian-made children’s movie was produced on behalf of J. Arthur Rank’s Children’s Cinema Club. It is also known under the title Christmas in the Outback. The cast includes Chips Rafferty as Long Bill, John Fernside as Jim, and Stan Tolshurst as Blue Kennedy. It is directed by Ralph Smart.

The movie is easy to find. For more than a decade, it aired on TCM (Turner Classic Movies) each holiday season and it can be found on DVD as well. Like most other movies, it comes and goes on different streaming services.

The Australian story was re-made in 1983 and once again released into theaters. Here, the Thompson family ranch is struggling financially and their mortgage is due on the first of the year. After the local Christmas dance, two thieves named Bill and Sly steal three of the Thompsons’ horses. Knowing their father is away tending to the cattle, young Helen and John Thompson, their cousin Michael from England, and their Aboriginal friend Malanpuy set off to follow the horse thieves. The children are determined to retrieve their stolen, prized horse Prince, the fastest horse in the community, in order to enter him in the New Year’s day race. The cash prize for the race will allow the Thompson family to pay off the mortgage and save the ranch. But first they must catch the thieves who have Prince!

The children’s adventure into the bush following the two horse thieves is more than they counted on. The youngsters encounter rugged conditions of steep mountains, stormy weather, wild animals, and they spend Christmas day on their own still following the thieves. The children eventually catch up to the thieves and raid their camp but the horses all run off. The young ones end up trapped in a well at an abandoned farm house, requiring a daring rescue. Although the thieves are not brought to justice, the children are glad to have Prince returned and entered in the race. After all this activity, the children question whether Prince will be able to win the race and save the family ranch on New Year’s day.

Some viewers may find this remake is even more adventurous and exciting than the original 1947 film.  Perhaps even more entertaining is that it is a very early role for a teen-aged Nicole Kidman, years before her Academy Award-winning Hollywood film career.  This once hard-to-find movie was released on VHS under the title Prince and the Great Race, but has since been released on DVD under the title Bush Christmas. It is currently available on Amazon Prime Video.

Thanks for reading along. Stop in again tomorrow and each day this month to discover another Christmas in July episode, special or movie.