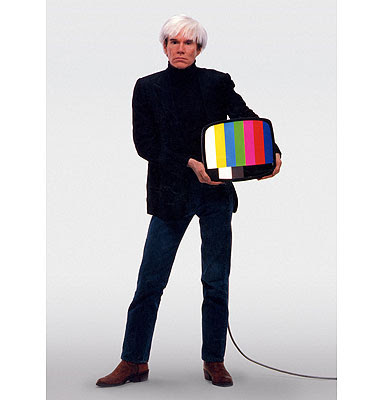 Those of you who were following my adventures while I was on book tour in November and December know that I spent a great deal of time between book signings at art museums around the country. Without any planning, I ended up with an amazing experience dominated by the works of Andy Warhol.

It's true I've been a huge fan of the complex pop icon since the mid-1980s. Perhaps I saw so many Warhols in the various museums I visited because I was attracted to them. Would I have seen just as many works of Henri Matisse or Mark Rothko paintings if I had been looking for those? Probably not. I was blessed to have been scheduled on my book tour to appear in two cities where their museums where holding special, temporary exhibits featuring the works of Andy Warhol.

At the Baltimore Museum of Art, I saw "Warhol: The Last Decade" an exhibit focused on Warhol's body of work after he stopped his filmmaking and returned to painting. These included many more celebrity portraits and his paintings with Jean-Michel Basquiat among others.

I also saw the Indianapolis Museum of Art's "Andy Warhol Enterprises" exhibit which focused on the commercial and business aspects of Warhol and his work. This included his early career work in advertising and window dressing to his prints of dollar bills and consumer products as well as the construction of himself as a commercial product becoming a model and spokesperson in advertisements in the 1980s. 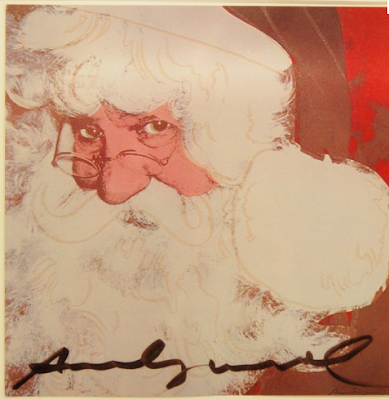 Andy Warhol's Santa Claus from his Myth series
While I did not see the above print of Santa Claus, I did see many other Warhol pieces. I'm not sure I can remember them all now but in Columbus, Georgia, I saw his portrait of President Jimmy Carter's mother entitled Miss Lillian. In Richmond Virginia, I saw Triple Elvis (which is really large!) I also saw several Brillo boxes and Single Elvis at the Akron Art Museum over Thanksgiving when I stopped at home for the holiday. The Akron Art Museum was also hosting the exhibit "Who Shot Rock n' Roll?" a collection of photographs of rock n' roll performers. This exhibit also included a photo of the Velvet Underground with Andy in the composition! I felt like I was seeing Warhol everywhere. And of course, the two major exhibits in Baltimore and Indianapolis.

Thus you understand my passion for Andy Warhol and why I am so excited to include the cult film Silent Night Bloody Night into my books. 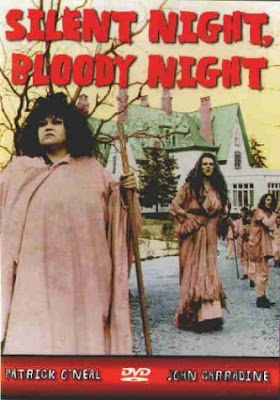 A very low-budget horror film, it was unleashed into theaters in 1974. This is your typical Christmas horror movie about incest, ax-wielding serial killers and escaped mental patients. What is atypical about this film is that it features cult film actress Mary Woronov as well as Ondine and Candy Darling who were notable Andy Warhol associates during the 1960s and regulars at The Factory, Warhol’s creative epicenter.

I was fortunate enough to have the opportunity to see Warhol's Screen Tests which included Ondine and Candy Darling at the Indianapolis exhibit. If so motivated, I wonder what kind of Christmas movie Andy Warhol could have made?
Posted by Joanna at 5:47 PM