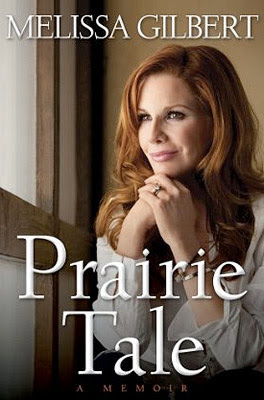 You may remember that last month I read Alison Armgrim's book Confessions of A Prairie Bitch. Click here to see what I wrote about that fabulously entertaining book. Arngrim made her fame on television playing the nasty role of Nellie Olsen on Little House on the Prairie. After indulging myself in those TV memories from the 1970s, I was inspired to read Melissa Gilbert's recent memoir, Prairie Tale. Of course, we all remember Melissa Gilbert as the child actress who brought Laura Ingalls, also known as Half Pint, to TV screens in the 1970s TV series Little House on the Prairie. She has also starred in countless TV movies in the decades since LHOTP.

Though Melissa has worked steadily in Hollywood since the early 1970s, her book focuses on her relationships and her internal life. (This lack of ego in the minutiae of her work may be a key to her career longevity!) That's not to say she doesn't include comment about her participation in Little House on the Prairie or the scads of TV movies she's made through the decades. However her book centers more on the details of her emotional life and her personal struggles over the years. I couldn't put the book down! The highlights include her passionate relationship with Rob Lowe in the 1980s as well as her more recent time served as Screen Actors Guild President. But I won't say much more to spoil the details in the book except to say...I loved it when she dishes the dirt and names names. Which she does.

Her book also reminds me of just how many Christmas entertainments Melissa Gilbert has been involved in. She mentions that her first TV show appearance was on The Dean Martin Show's Christmas special. Her grandfather, Harry Crane, was Martin's head writer. (I haven't seen it but I believe she is referring to the 1970 holiday episode.) Gilbert also mentions that she auditioned for the 1973 TV movie Miracle on 34th Street but didn't win the role--losing out to Suzanne Davidson. On page 66 of her memoir, Gilbert begins an anecdote from her work in the 1977 holiday movie The Christmas Coal Mine Miracle, also known by its original title, Christmas Miracle in Caufield, U.S.A. She also recounts the 1996 TV movie Christmas in My Hometown also called A Holiday for Love. However, she doesn't mention in her book her work on 1979's Nutcracker Fantasy nor the 1985 episode of "The Snow Queen" on Faerie Tale Theater. But that's okay.

The work Gilbert is perhaps most known for is her role as Half Pint on the long-running series Little House on the Prairie. That series has several Christmas episodes but one touching moment comes to mind. In the 1981 holiday episode "A Christmas They Never Forgot," the Ingalls family and friends are stranded together indoors during a severe snowstorm. They begin to entertain themselves by sharing their favorite memories of Christmases past. See below for Part 1 of this episode from Youtube.

"The Christmas They Never Forgot" Part 1

My favorite segment in this episode is Laura's memory of her family's first Christmas together in Kansas, spent with Mr. Edwards. Fans of the show should recognize this flashback as a clip taken from the two hour pilot movie from 1974. What many may not know is that this Christmas story line is originally from the book The Little House on the Prairie from the passage entitled "Mr. Edwards Meets Santa Claus." For me, this holiday scene is poignant not only because Laura Ingalls Wilder wrote it but also because we are watching a very young Melissa Gilbert who brought Wilder to life for an entire TV generation.

Christmas clip from the 1974 two hour pilot movie
Posted by Joanna at 12:25 PM

Email ThisBlogThis!Share to TwitterShare to FacebookShare to Pinterest
Labels: Alison Arngrim, Christmas in My Hometown, Little House on the Prairie, Melissa Gilbert