The family drama/comedy Eight is Enough has been in the news lately.  Finally, the first season was released on DVD this year and, last week, the series' executive producer Lee Rich passed away. Check out his obit here.

I'm of the age to remember watching this series when it originally ran and the Christmas episode was a special one in my house.  The second season episode "Yes Nicholas, There Is A Santa Claus" was the only Christmas story created and was re-run each December while the series was in production.  This two-hour episode would be broken into two parts for re-broadcast.  One of the reasons this Christmas episode still remains a strong one is that it has an original storyline and an appropriate mix of silliness with sentimentality.


In Part 1 of "Yes, Nicholas, There Is A Santa Claus," the Bradford family is out of sorts on Christmas Eve.  Though the family members don't discuss it much, this is obviously the first Christmas since their mother, Joan (played by Diana Hyland in the first season), has died.  The awkwardness of this grief causes each family member to make themselves busy on Christmas Eve to avoid their deep feelings of loss.  (These emotions will come out more in Part 2).


Tom remains distracted as he writes his New Year’s newspaper column.  Nancy, Susan and Elizabeth  are busy planning to go out on dates for the evening and eldest brother David is planning on leaving to spend the holiday with his girlfriend Noreen’s family out of town.


Oldest sister Mary is depressed because she thinks her application to medical school has been rejected  and Tommy seems more angry than usual.  Tom’s new wife Abby (they just married in a previous November episode) has been hoping for a more traditional evening’s celebration since this is her first Christmas with her new family.


Realizing that Abby wants to spend time with her new family on Christmas Eve, Tom insists his children delay their evening's plans in order to be home on Christmas Eve.  Unfortunately, the night becomes more of a chore than a celebration when the young adults spend their time together grumbling and then rushing through decorating the Christmas tree in order to leave for the evening.


However, the youngest child, Nicholas’ wish comes true when he sneaks down into the living room in the middle of the night and spies Santa Claus with his bag by the Christmas tree.


Come Christmas morning, the family realizes that their home has been robbed--their gifts have all been stolen and the family's cars are both missing.  Susan hasn’t been home all night and the police fear she's been kidnapped!  It turns out Nicholas is the only witness to the thief, the man he assumed was Santa Claus.


TV junkies like myself will love the casting of the character actors who fill out this special Christmas episode.  The best is actor Will Geer who plays Sam, the Santa Claus/thief who breaks into the Bradford home and greets Nicholas when he's caught in the act.  Will Geer is perhaps best remembered as playing Grandpa on the long-running family drama The Waltons.  If you pay attention, you'll see Will Geer's real-life son, Thad Geer, in the role of Nancy's date, Alan.


Do you recognize Alan's friend, Harold?  Harold is Susan's last-minute date for Christmas Eve.  When Susan doesn't return from her date after midnight mass, the family begins to worry about the integrity of Alan's friend.  Harold is played by actor Nicholas Hammond, who you may recognize as Friedrich Von Trapp, the oldest son in the classic movie musical The Sound of Music.  Or, if you're a Brady Bunch nut, like myself, you'll know Hammond also played hunky Doug Simpson, Marsha's crush who breaks their date after she bruises her face ("Oh my NOSE!").  He's had some career!


Wait--there's more!  The policeman who arrives on Christmas morning at the Bradford home to take the robbery report, Officer Bernstein, is played by character actor Larry Gelman.  I remember Gelman best from his role as Dr. Tupperman on The Bob Newhart Show. 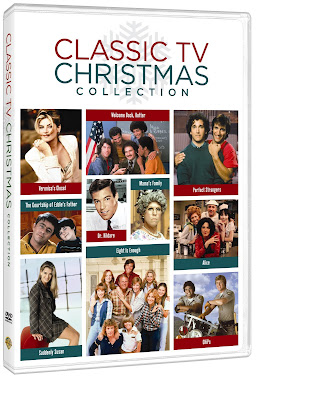 While waiting for season 2 of Eight Is Enough to be released on DVD, you can watch this episode on the Classic TV Christmas DVD or buy the download from Amazon Instant Video. Click HERE for Part 2 of "Yes Nicholas, There Is a Santa Claus."  Do you remember watching this classic Christmas episode?
Posted by Joanna at 11:50 AM