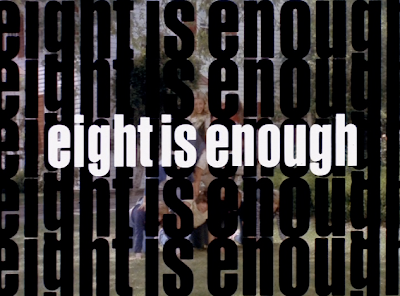 Continuing with Part 2 of the 1977 Christmas episode of Eight is Enough entitled "Yes Nicholas, There Is A Santa Claus."  Click HERE to see Part 1 again.  Before you read on, you may want to grab a few tissues--the conclusion of this Christmas episode tends to induce tears.


After breakfast on Christmas morning, Susan arrives safely at home, unaware that there was concern about her being missing.  Susan remarks that she saw the family station wagon across town and the whole family piles into David’s van to go find the stolen car and their thief.


When the Bradfords arrive, the angry family bursts into the home of a poor, lonely old man named Sam.  He pulls at their heartstrings with a sad tale about not being able to afford to send gifts or even visit his ten grandchildren who live in San Diego.


The police arrive to arrest Sam and impound the family’s gifts as evidence.   The Bradford family's Christmas is in the custody of the police evidence lockers, not to be released until February.


Back at home and feeling sorry for themselves, the family eventually tries to make the best of Christmas.  They open the remaining gifts of Nicholas’ drawings and exchange heartfelt gifts that they didn’t have to buy.


The children eventually convince their father to bail Sam out of jail, inviting him back to their home for Christmas dinner.  Tom even gives Sam a bus ticket to San Diego!


But the unforgettable moment within this set of episodes is the final scene.  Tommy, who spent Christmas day alone in his room, is given a gift recently discovered hidden in a kitchen cupboard. It is a Christmas present purchased by his mother before she had died, set aside and forgotten.  It is a reminder to everyone how thoughtful and generous their mother was--and an emotional reminder of her absence.


The whole family is reduced to tears as Tommy opens the precious gift.  Despite this miserable Christmas day, the Bradford family is allowed one special last moment with their mother's spirit.  Choked with tears, Tommy opens his gift--a book by e.e. cummings, his mother's favorite poet.  (If you are not crying during this scene, you aren't human). Through his tears, father Tom reads the book's inscription to the whole family, giving everyone a chance to hear their mother's thoughts and affections one last time.


(WHERE are those stupid tissues?  Didn't I warn you?)


Fans of Eight is Enough may remember that the series returns to the character of Sam in the third season.  In the 1978 two-part episodes "You Won't Have Nicholas to Kick Around Anymore," upset with his home life, young Nicholas runs away to find his friend Sam.  Once in San Diego, however, Nicholas learns his friend has since passed away and Sam's acquaintance, Joe Simons played by Jack Elam, encourages Nicholas to return home.  Sadly, actor Will Geer, who played Sam the charming con man, passed away earlier in the year.

Do you remember these Eight is Enough episodes?  Doesn't Will Geer (who also played Grandpa on The Waltons) make a great Santa/thief?  You can't stay mad at this charming con man.  What perfect casting.

What Christmas entertainments were you watching in the late 1970s?  Do you remember?
Posted by Joanna at 12:30 PM