One sitcom in the 1960s, where TV viewers sought an escape. was Family Affair--adorable twins Buffy and Jody were the ideal young children.  Do you remember this series' set-up?  Orphaned 6 year-olds Buffy and Jody, and their teenage sister Cissy, go to live with their bachelor Uncle Bill and his gentleman's gentleman Mr. French in an apartment in Manhattan.  After some adjustment by the adults as well as the children, the family settles in to learning how to thrive together.  It's a very gentle series--and one of my favorites from my childhood.  Do you remember the Christmas episode?

The third season produced the episode "Christmas Came A Little Early," first airing in November 1968.  Young Buffy is asked by her schoolteacher to drop off homework for another classmate named Eve.  Eve is too sick to go to school--she only participates in class by means of an audio box on the teacher's desk.  Buffy has heard Eve many times through the speaker box but she's curious to meet Eve whom she's never seen before.


The two little girls hit it off and quickly become good friends.  Looking to help Buffy's new friend, wealthy Uncle Bill calls in a few favors from a doctor he knows and has Eve's condition looked over by a specialist.  Turns out, Eve is quite sick and there's nothing anyone can do for her.  Trying to protect his young niece, Uncle Bill asks Buffy to stop visiting Eve.  But Buffy won't hear of it.  Buffy knows that her friend needs her most when she's not feeling well. Warning: you may want to get a box of tissues handy before continuing to read!


Later, Uncle Bill explains to the whole family that they will be celebrating Christmas early this year.  He's involved in another over-seas building project and fears he may be called away--so they agree to celebrate the holiday early in order to be together.  Uncle Bill suggests that Buffy invite her friend Eve to the Christmas party and the young girl reminds her uncle that Eve can't leave her bed.  So Uncle Bill generously suggests they bring their party to Eve's house so everyone can have fun together.


The children easily embrace celebrating Christmas early.  Mr. and Mrs. Bowers and the Davis family gather together to decorate a Christmas tree and open gifts.  Eve declares the Christmas tree to be the "most beautiful, most wonderful" tree she's ever seen.


After the party, we hear Uncle Bill talking to Mr. French discussing how well the evening's Christmas party went.  But Uncle Bill hears Buffy crying from her bedroom.  Without talking, Uncle Bill holds Buffy while she cries.


Certainly adult viewers get what's going on here:  this is Eve's last Christmas.  Though Uncle Bill had tried to protect Buffy from knowing the details, the little one had figured it out all on her own.  Without further explanation, I think the youngest of children watching this episode's story may not understand the painful reality here--but it's clear enough for the rest of us.  It doesn't matter how many times I've seen this gut-wrenching episode, watching it again ALWAYS makes me cry. hard.


You may recognize actress Eve Plumb--she also played middle sister Jan Brady on The Brady Bunch.  I've been watching The Brady Bunch my entire life--not only do I love it but I'm sure I have internalized every episode and line of dialogue as well.  That may very well be one of the reasons it's so painful to watch this Family Affair episode!

Something you may not realize is that there are several more Christmas stories with very similar plotlines.  A nearly identical plot is repeated on the TV series Road to Avonlea in the 1995 episode "Christmas in June."  The 2011 GMC original TV movie The Heart of Christmas is about a community coming together to help a family celebrate one special last Christmas together with their young son who has leukemia. 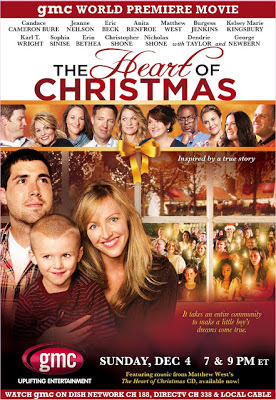 More common are similar stories about dying or disabled children that are miraculously healed by Christmas time.  Most notable are the the animated programs The Tiny Tree from 1975 and Magic Gift of the Snowman in 1995.  And, the 2010 Hallmark Hall of Fame TV movie November Christmas sees a terminally ill child survive what others believe is one last Christmas.

Death and dying Christmas stories are far more common that I ever expected before I began formally researching and watching Christmas TV programming a little more than ten years ago.  I have come to speculate that some viewers appreciate or are drawn to the cathartic effect of stories about grieving in Christmas entertainment.  Surely we all experience loss in our lives--and Christmas may be a time when we more deeply feel that loss.  Do you agree?  Do you have better insight on the popularity of sad stories we watch at Christmas time?  Share it in the comments below--I'd love to hear what you think.