When you think of great literary works that have inspired Christmas entertainment, Charles Dickens' A Christmas Carol is usually the first thing that comes to mind.  But Dickens wasn't the only great author to be inspired to write timeless human tales that capture the Christmas spirit.  Lately I've been thinking about the great American author O.Henry and two of his short stories that continue to endure within Christmas entertainment.  Over the next several weeks, I thought I'd share several of my favorite adaptations of O.Henry's two most popular Christmas stories. 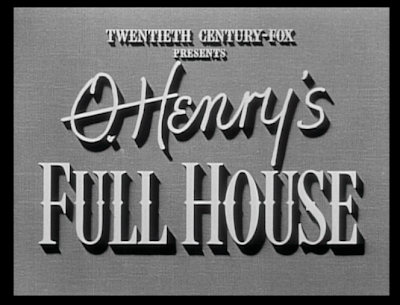 The 1952 black and white, theatrical release film O.Henry's Full House is a convenient place to start.  This film consists of five vignettes, each adapted from a popular O.Henry short story and helmed by a successful Hollywood director.  The five vignettes are The Cop and the Anthem, The Clarion Call, The Last Leaf, The Ransom of Red Chief, and The Gift of the Magi.  It is the first and last segments that I'm most interested in discussing here.

The film's first segment is The Cop And The Anthem which stars Charles Laughton as Soapy and David Wayne as Soapy's friend Horace.  The segment is directed by Henry Koster.  Christmas trivia: director Henry Koster also directed the 1947 Christmas movie The Bishop's Wife starring Cary Grant, Loretta Young, and David Niven.  And, Koster directed 1949's Come to the Stable starring Loretta Young and Celeste Holm--another popular movie at Christmas time because its family-friendly story centers on a pair of nuns looking to establish a children's hospital.


Are you familiar with the story of The Cop and the Anthem set at the turn-of-the-twentieth-century in New York City?  Soapy, a genteel bum (think: erudite homeless person that values his freedom from having to work for a living) recognizes that his nights spent sleeping in the park are getting colder as winter approaches.  Talking to his friend Horace, Soapy decides to get himself arrested so he can spend the next 90 days in prison--with a free bed and hot meals--to escape the chill of winter.


Soapy's first criminal act is stealing a man's umbrella from under his arm.  But the victim refuses to call out to a policeman on the street, revealing he had stolen the umbrella and fearing that Soapy may be the umbrella's original owner.  Shrugging his shoulders, Soapy moves on to commit another crime.  Next, the hobo goes into a fine restaurant and eats a very expensive meal.  When he receives his check and admits he has no intention of paying, the owner looks to avoid any trouble and refuses to call the police.  Moving on, Soapy spots a policeman on the street bending over and he rushes forward to kick the officer!  Once again thwarted, Soapy slips on a banana peel and falls to the ground where the kind officer bends over to help the hobo back on his feet.  Getting more desperate, Soapy picks up a horseshoe in the street and throws it through a store window!  His friend Horace runs down the street to avoid any trouble but the store owner and the policeman run after him despite Soapy's loud insistence that he broke the window!


Still hoping to get his 90 days, Soapy spots a beautiful woman on the street and decides to cause a scene.  Breaking the rules of polite society, Soapy approaches the female stranger, compliments her beauty and offers her a drink.  Instead of being accused of being a masher, it turns out the woman is a prostitute and appreciates the friendly offer. 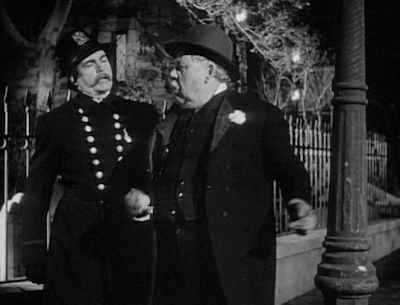 Soapy wanders down the street and hears music playing in a church.  Inside the church, he reconsiders his day's efforts and decides to rededicate himself to a living a better life.  Inspired to make something of himself, Soapy steps outside the church and begins going through his pockets looking for the business card he knows he has with a man's name who once offered him a job.  It is at this moment that poor Soapy has the attention of a policeman who arrests him for loitering.  In court, the judge takes one look at Soapy and sentences him to 90 days in jail for vagrancy.

This sort of twist ending is a story device O.Henry used again and again.   Poor Soapy spends all day trying to get arrested so he can continue to live his care-free life as a bum.  Once he changes his mind and decides to try to be an upstanding citizen and get a job, he's arrested and thrown in jail!  Though the O.Henry's Full House version of the tale doesn't really acknowledge the holidays, the original short story takes place at Christmas time.


The fifth vignette in O.Henry's Full House is the holiday classic The Gift of the Magi which stars Farley Granger as Jim and Jeanne Crain as Della. This segment is directed by Henry King.  We're all familiar with the story of The Gift of the Magi, right?  Again, it's the turn-of-the-twentieth-century in New York City, newlyweds Jim and Della have just enough to live on but not enough to afford buying each other Christmas gifts.


Della can't imagine Christmas time without giving a gift so she sells the only thing she has of any value: her long hair.  With that money, she buys a fancy watch fob for Jim to use with his prized possession, a pocket watch.   When Jim comes home from work on Christmas Eve, he sees how she's cut her hair and he offers his Christmas gift: a set of expensive combs to use in her long hair.  Della offers Jim her gift of the watch fob only to learn that he sold his pocket watch in order to buy the combs.


Though this familiar story has been told and re-told dozens of times over the years, we shouldn't forget its meaning.  O.Henry's story embodies the spirit of the adage "it is better to give than to receive."  Their sacrifices, made out of love, cause Jim and Della to laugh from joy--because they each gave as they wanted--and not cry from disappointment because the gifts are now useless and impractical.  The Gift of the Magi is like other O.Henry stories in that it features a twist ending but in this case the twist results in the characters experiencing something emotionally greater than any gift they could have given each other.

Email ThisBlogThis!Share to TwitterShare to FacebookShare to Pinterest
Labels: O. Henry, The Cop and the Anthem, The Gift of the Magi