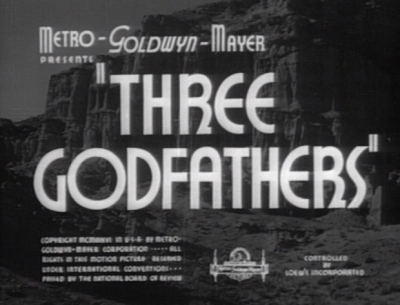 I'm continuing my discussion of the several filmed adaptations of Peter B. Kyne's novel Three Godfathers.  I wrote about 1930s Hell's Heroes last week.  Click HERE to see that post again.  Today I'd like to share about the 1936 re-make entitled Three Godfathers.  Not only is this western a thrilling and emotional story but it is also a Christmas movie.  Not only is this over-looked classic film broadcast on Turner Classic Movies channel during the holiday season each year, but it is also available for viewing--along with Hell's Heroes--on DVD from the Warner Archives.


Three Godfathers contains all the same essential story elements as the earlier film Hell's Heroes.  Three outlaws rob a bank in New Jerusalem and make their escape into the desert only to find that the nearest watering hole has gone dry.   In order to survive, they must return to the city where they are wanted men.  They stumble across a dying woman with an infant in a covered wagon and the three outlaws attempt to bring the baby back to New Jerusalem with them.  One by one the outlaws succumb to thirst until the last outlaw makes the ultimate sacrifice to ensure that the baby lives.

While the earlier movie Hell's Heroes is an outstanding dramatic film, this 1936 version spends more time developing its characters.  In the six years since Hell's Heroes was made, sound technology had progressed significantly and there is much more exposition in this film partially because of the abundance of dialogue.  There are extended scenes of the three men in town before the bank heist and all three attend a community Christmas party.  We learn that Bob is a former resident of New Jerusalem and everyone knows him to be a bad man, even a killer.  When Bob shoots Frank, the bank cashier, during the course of the robbery, we already know that Bob is jealous that Frank is marrying Bob's former girlfriend Molly.  The preponderance of dialogue also gives us more details about the distance between the dried up watering holes, the location of the poisonous water hole, and how far away their journey on foot takes them.

We also learn that all three outlaws are neither all good nor all bad men.  Each of them may be outside the law but there's more character explored here to give each of them shades of gray in terms of kindness and compassion.  Bob, the most villainous of the three men, is more clearly defined as such which brings an even sweeter conclusion to the film when he works even harder for his own salvation in saving the innocent baby.


This 1936 film is also a little more accessible and engaging because it includes more recognizable film stars in the lead roles.  You may remember the actor Lewis Stone who plays Doc from his long string of appearances as Judge Hardy, Andy's father in the Andy Hardy movies series also starring Mickey Rooney.  The character of Gus is played by the Oscar-winning actor Walter Brennan who many may recognize from his long career in western movies and on TV as Grandpa Amos on The Real McCoys.


The rogue Bob is played by actor Chester Morris who also brought the filmed character of Boston Blackie to life.  (Have you seen the 1942 movie Alias Boston Blackie?  It's set at Christmas time too!)


In smaller roles in this movie, Molly is portrayed by actress Irene Hervey--a successful actress with a long career.  Hervey also played Aunt Meg on Honey West but I always remember her as the real-life mother of singer Jack Jones.


And, the character of Professor Snape--the odd, false teeth vendor at the community Christmas party--is played by actor Sidney Toler who also starred in a string of successful films in the 1930s and '40s playing the great detective Charlie Chan.

Another strength of this version's story is that it is more firmly set at Christmas time.  When the men first arrive in town, though two of them are strangers, they are warmly invited to the town's community Christmas party.  Christmas decorations can be seen in the town saloon and at the community party.  When the bank cashier is killed during the robbery, he is wearing a Santa Claus suit.  And, there are multiple references connecting these three wandering souls in the desert with the three magi of the Nativity story.  Not only does Doc bring up the similarity between the three bank robbers celebrating Christmas with a baby and the original Nativity story--a reference that goes over Gus' head--but we see the 'godfathers' each offering very precious gifts to the baby as one by one, each gives his portion of the bank heist gold on behalf of the baby's survival.  It turns out in the end, Bob has given his own mother's gold watch--his only possession--as an heirloom for the baby.  Early in the film, we see Doc 'reading the stars' as he discusses another character's astrological fortune.  Together these references to the three wandering magi and the other holiday details add up to a more Christmas-y story.

Do you like westerns?  What's your favorite Christmas movie re-make?