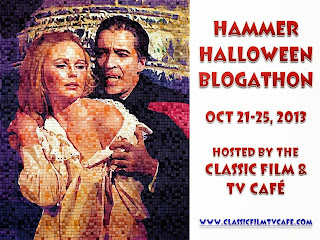 This post is part of the Hammer Halloween Blogathon hosted by the Classic Film & TV Café. Click here view the complete blogathon schedule.


Christmas stories have long been filled with frightening elements.  One doesn't have to look any further than Charles Dickens' A Christmas Carol to find a very popular ghost story.  This blogathon is a celebration of Hammer Film Productions, which tended to feature horror stories, but I'm not going to be sharing a ghost story, nor a movie with an axe-wielding Santa Claus.  However, there is an enjoyable psychological thriller worth discussing.  1961's Cash On Demand is a British-made Hammer production and its story takes place at Christmas time.  Perhaps not so coincidentally, you may also recognize a bit of Dickens in it, as well.


The movie's story takes place on the morning of December 23rd within a bank, in a small community in southwestern England.  A gentleman named Colonel Gore Hepburn passes himself off as a bank insurance inspector, and cleverly robs the bank.  In this heist, the robber convinces the bank's manager Mr. Fordyce that he is conspiring with a team who holds Fordyce’s wife and child hostage until the robbery is complete.  Fordyce must endure a humiliating morning while the robber demands that he cooperate with a complex set of instructions.  Pretending to investigate and evaluate the bank's staff on their security procedures, Hepburn has Fordyce assist him in removing the vault's cash holdings while the rest of the bank's staff are unaware of the ruse.

While this story may not satisfy your appetite for a Halloween monster picture, it is an edge-of-your-seat, suspenseful tale, as we watch the brilliance of Peter Cushing's character, Fordyce, pushed to his psychological limits.  In the opening we are introduced to Fordyce as a martinet, an unforgiving boss without any holiday spirit.  As the other bank employees look forward to the office Christmas party, Fordyce is more concerned with pointing out their individual weaknesses and using humiliation to keep them in line.  Later in the story, the mastermind Hepburn uses Fordyce's tight grip on his own sense of superiority and dignity in order to manipulate the manager to Hepburn's criminal will.  Fordyce's character is repeatedly challenged and he begins to mentally crumble, desperate to adhere to his high standards while frightened into submission for the safety of his family.  This film's strength is the tension that is built and held while we watch the heist unfold, and Fordyce comes closer and closer to mental collapse.


It's not a stretch to say you'll be impressed with the acting in this movie.  It’s wonderful to see British actor Peter Cushing in this black-and-white cult classic--introduced to many American audiences by his small role as Grand Moff Tarkin in the 1977 movie Star Wars: The New Hope.  However, classic horror film fans may recognize Cushing from his many appearances in Hammer Films.

Comparisons between the stern boss Fordyce and Ebenezer Scrooge are inevitable here as the robber challenges the bank manager’s prickly character again and again throughout the story.  Fordyce is just as insensitive to the holiday spirit with his subordinates as Scrooge is with his employee, Bob Cratchit.  Just as in Dickens' A Christmas Carol, viewers may ask themselves if Fordyce will transform his character, promising to change his ways at the end of this Christmas tale.  Watching this thriller may be the perfect antidote if you’re feeling the uneasy pressure of commercialism and monetary concerns at Christmas time, once again reinforcing my claim that there's a Christmas movie for every taste preference.

Please check out the other Hammer Films in the blogathon.  Happy Halloween!