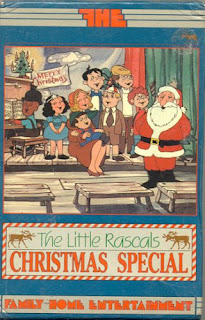 The 1979 animated half-hour special features everybody's favorite characters from the theatrical short films of the Our Gang comedies also known as The Little Rascals. The animated Christmas special also takes place in the Depression-era 1930s. Here, Spanky and his little brother Porky desperately want a Blue Comet electric train for Christmas. They overhear their mother ordering one from the department store on the phone and assume it’s for them--but she was ordering it for the Vanderhoff family for whom she works as a maid. She discovers that her sons are expecting the electric train and so she sells her winter coat in order to afford the train. When Spanky and Porky see her without a decent coat, they decide to earn the money to buy her one for Christmas. But their efforts fail--there’s no snowfall to earn money shoveling snow, their baking doesn’t look appetizing and their musical show doesn’t have enough of a paying audience. They even try to return the Blue Comet train set in order to afford the new coat but it gets stolen by street thugs before they reach the store. Fortunately, the Santa Claus on the street has been watching the activities of these little boys and knows that their hearts are in the right place.

The animated special also features the voice talent of Darla Hood and Matthew 'Stymie' Beard, two of the original child actors from the original series of Little Rascals shorts. Both lend their voices to grown up characters, with Darla Hood as the character of the mother and Stymie Beard as the butcher.

Or, watch it for yourself. Part 1


If that's not enough Little Rascals Christmas fun for you, then you should re-watch the 1946 original It's a Wonderful Life movie with Jimmy Stewart and Donna Reed. In the scene at Harry Bailey's graduation when George Bailey (Stewart) and Mary (Reed) first lay eyes on one another, someone is talking to Mary. That same someone, Freddie Othello, later pushes the button that opens the floor under the dance contest, spilling George and Mary into the swimming pool. The jealous Othello is played by actor Carl Switzer, also known as Alfalfa from the Little Rascals.
Posted by Joanna at 4:50 PM