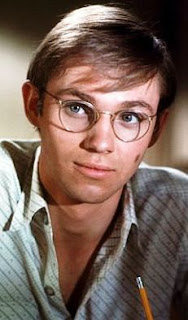 June 13th is the birthday of actor Richard Thomas. As someone who writes about Christmas on TV, I'm impressed with the great number of programs that Thomas has participated in. In 2000, he played the lead in the made-for-TV movie The Christmas Secret as a zoologist seeking scientific proof that reindeer can fly. But the proof he seeks leads him to a more important discovery about faith and the magic of Christmas. Beau Bridges plays a convincing Santa Claus.

Thomas also plays the lead in the inspirational 1997 made-for-TV Christmas movie A Thousand Men and A Baby about the crew of a Unites States Navy air craft carrier who takes care of an abandoned half-American, half-Korean baby after the end of the Korean War.

Popular author Richard Paul Evans wrote two novels The Christmas Box and Timepiece which were adapted into made-for-TV Christmas movies in 1995 and the sequel in 1996, respectively. Though Richard Paul Evans has several more novels that were made into Christmas TV movies, it is these first two mentioned above that actor Richard Thomas appears in--as the main character, Richard Evans.

Thomas also appears in the hard to find 1991 made-for-TV movie Yes Virginia, There is a Santa Claus. Thomas plays the role of Virginia O'Hanlon's working-class father. But his role is often over-shadowed in people's memories by the appearance of actor Charles Bronson in this same movie, who plays the gruff newspaper editorial writer Frank P. Church.

And, Hallmark Hall of Fame's 1958 special The Christmas Tree includes Richard Thomas in its long list of star-studded cast. From what I can tell, this hasn't been seen in decades and is not released on DVD nor VHS.

My favorite Richard Thomas Christmas role however is from the made-for-TV movie The Homecoming from 1971. The story focuses on the events of Christmas Eve 1933 when the large family anticipates the arrival of their father to come home for the holiday. This of course is the movie based on the writings of Earl Hamner about his rural family living in the mountain of Virginia during the Depression. The success of this movie went on to bring about the TV series The Waltons. There are certain moments in that movie that have stayed with me for a lifetime. The one that still brings tears to my eyes is the scene where Elizabeth opens the donated Christmas gift from the missionaries for the poor children to discover that the face of the baby doll was broken. The little girl drops it in terror that the broken doll means it's dead. But to the older siblings the unsatisfactory gift means that poor, rural children can only expect broken, damaged gifts from do-gooders. Another is the ending when father John finally arrives safe at home after the long trek through the blizzard (I can't be spoiling anything--Christmas movies always have happy endings, you know). I love his story he tells the children, the explanation for the bag full of gifts in his possession--as John approached his home, he confronted a stranger on the roof that dropped this sack. The children squeal in delight thinking that their father has mistaken Santa Claus for a possible intruder.

Of course, the TV series The Waltons went on to have more Christmas episodes: 1976's The Best Christmas, 1977's two-hour The Children's Carol (which has since been split into two parts), 1978's The Day of Infamy and 1979's The Spirit. However, Richard Thomas only appears in 1976's The Best Christmas. Happy Birthday to the wonderful actor who's poignancy and complexity has enriched our Christmases for years.