Confessions of a Prairie Bitch 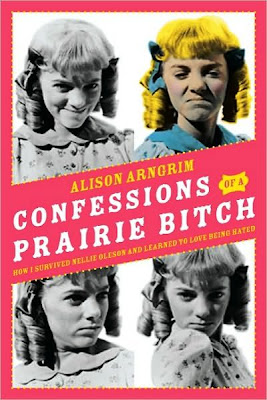 I don't just have a voracious appetite for watching television but I also read books about TV.

I recently completed the 2010 release Confessions of a Prairie Bitch: How I Survived Nellie Olsen and Learned to Love Being Hated by Alison Arngrim. Every person who has ever watched the 1970s TV drama Little House on the Prairie has been touched by the nasty villainous character Nellie Olsen. Now fans of the TV series and character can find out what it is like to be the actress who brought that bitchy character to life. 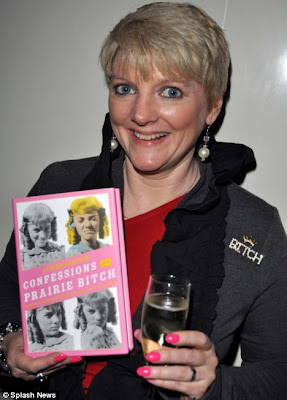 Alison Arngrim today, embracing her ability to bitch about AIDs and sexual abuse.
This autobiography is everything you want it to be. It is written in a strong voice that is both clever and culturally literate. She dishes not just about her own personal experiences as a Hollywood child actress but also about those she worked alongside including Michael Landon, Melissa Gilbert and Melissa Sue Anderson. Arngrim and Gilbert (the actresses who play Nellie and Laura) were actually best friends on the set! Arngrim also includes details from the most remembered scenes of our favorite episodes from Little House that feature the wicked Nellie Olsen.

My favorite section was Chapter Eleven where Arngrim describes the behind-the-scenes experiences on filming everyone's favorite Nellie moment: when Laura pushes the nasty Nellie, who is seated in a rickety wooden wheelchair, down a hill and into a frog pond. This is the 1976 episode entitled "Bunny." If you will remember, this third season episode's story starts when Nellie falls from her horse Bunny and pretends to be paralyzed. Since the horse used to belong to Laura, the middle Ingalls daughter feels guilty for Nellie's injury and agrees to help the paralyzed child now stranded in a wheelchair. Laura eventually discovers that Nellie isn't actually immobilized but is just using Laura as her own personal slave. The episode climaxes when Laura pushes Nellie in a wheelchair over the edge of the hill in order to prove to everyone in Walnut Grove that the blonde bitch has been faking it the whole time. This is everyone's favorite nasty Nellie moment because it's one of the most satisfying scenes where Nellie gets what she deserves at the hands of Laura.

Nellie pushed down the hill in a wheelchair. Don't feel sorry for Nellie--she deserves worse!
Fans of Little House on the Prairie will remember that this hilarious episode's story picks up from the Christmas storyline in the 1974 episode "Christmas At Plum Creek." Nellie Olsen acquired Laura's pony after Laura traded it to her for a Christmas gift for her mother. "Christmas At Plum Creek" is a heartwarming story about sacrifice with a hint of O.Henry's popular tale "The Gift of Magi." Not only does Laura feel the loss of her cherished pony at Christmastime but she must face, in this later episode, the indignity of Nellie claiming Laura's horse is not just untrained and dangerous but Nellie also heaps guilt on poor Laura for her phony paralysis.

I know I'm not the only one who jeered each time the villain Nellie Olsen came on my TV screen in the 1970s. It's a wonderful read to learn just how the actress that brought this delicious bitch to life feels about being one of TV's most hated characters. Not only has Arngrim grown to embrace the strength of her TV character but she's been able to use this courage to speak out for those suffering from AIDs and those who have been sexually abused. Who could have anticipated that this insufferable TV character would be brought to life by an actress that inspires the best in all of us?

Part 1 of "Christmas At Plum Creek" from Little House on the Prairie
Posted by Joanna at 10:36 PM

Email ThisBlogThis!Share to TwitterShare to FacebookShare to Pinterest
Labels: Little House on the Prairie