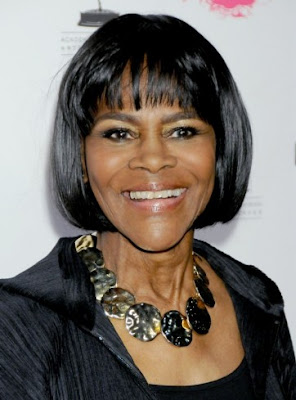 Cicely Tyson is one class act. The actress has brought dignity and strength to many of the characters she's portrayed over the years not limited to the 1977 TV miniseries Roots and the 1972 powerful film, Sounder. Two more TV movies, 1974's The Autobiography of Miss Jane Pittman and 1977's Wilma, both had a very powerful effect on me when I watched them when they first aired. Tyson has helped to influence the roles of African-American women in film and television away from predominantly stereotypical background characters to influential history-makers and strong women at the story's center. 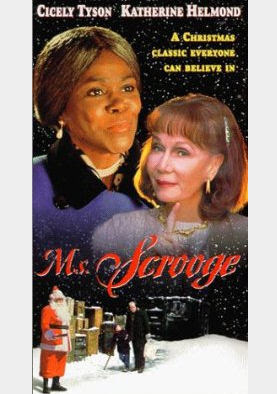 1997 TV movie Ms. Scrooge starring Cicely Tyson
This is also true for Tyson's role as the central character in the 1997 made-for-TV movie, Ms. Scrooge. Here, Ebenita Scrooge is a successful banker who loves Christmas because people always over-spend and over-borrow money and she makes a profit from this. In a re-telling of Charles Dickens' classic tale, Scrooge is visited by her former boss Maude Marley (played by Katherine Helmond) who warns her about her greed. The Ghost of Christmas Past shows Ebenita visions of her father’s struggle to run his own grocery store, her brother’s death in the war and her choice of a career over love. The Ghost of Christmas Present shows her employee Bob Cratchit’s family and his need for a decent health care plan. The Ghost of Christmas Future shows her that no one benefits after her death when the government claims her estate and her wealth.

This Scrooge story ends a little differently than most because Ebenita goes to church after her Christmas Eve transformation. Perhaps this is a lesson others will prefer over other TV adaptations of the original tale. (Trivia: which other filmed version(s) see Scrooge visit a church?) TV fans may notice that this film is directed by John Korty, the same who directed Tyson in the earlier successful movie The Autobiography of Miss Jane Pittman. 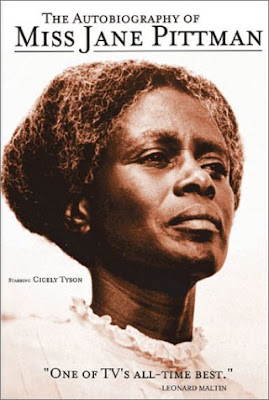 TV movie The Autobiography of Miss Jane Pittman--remember the water fountain scene?
Ms. Scrooge still regularly airs on TV each December (I usually see it on Lifetime) but it is currently available for viewing on Youtube as well (see below for Part 1).

Here is Part 1 of Ms. Scrooge from Youtube
Posted by Joanna at 1:52 PM